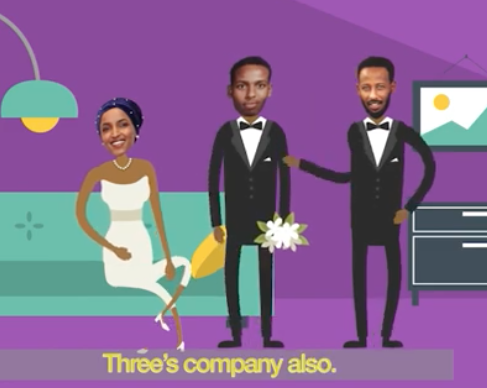 I have been researching and writing about Ilhan Omar’s suspicious past.

Now Judicial Watch has delivered a legal complaint to Congress to investigate potential immigration, marriage and tax frauds. Now legitimate questions are out in the open.

The reason no action has been taken at state level is possibly because the Attorney-General of Omar’s state of Minnesota is Keith Ellison!

Keith Ellison is known for his admiration of Louis Farrakhan, his connections to CAIR the American arm of the Muslim Brotherhood, and his disdain for Israel.

Before you see this Glenn Beck video (below) about Ilhan and her family, I want to make two points.

Recently discovered screenshots show that Ilhan’s once legal husband, and the brother she denied, Ahmed Elmi, is gay. Why would she marry a gay guy?

And they lived in the same house with her faith-based husband and their 2 kids!

When she lived in Mogadishu as a small girl, her father was a “teacher of teachers.”

Which side of the civil war was her family on?

The brutal dictator, or the people?

There are reasons to believe that Nur Said Elmi was the propaganda and indoctrination chief for the brutal dictator, Siad Barre, in Somalia. Was he the teacher of teachers who spread the ideology that ruined Somalia, and did he nurture his daughter with this Marxist-Islamic political agenda?

At the time of Ilhan’s election to Congress, her sister, Sahra, wrote on social media about their father, “he’s a great political strategist and fundraiser.” Was this a talent he brought from Somalia where he aided and abetted a war criminal?

The answer to this question may explain the political path that his daughter is taking.

Daniel Greenfield: The History of the Israeli Community of Ramat Trump

Democrats Are the Real Racists