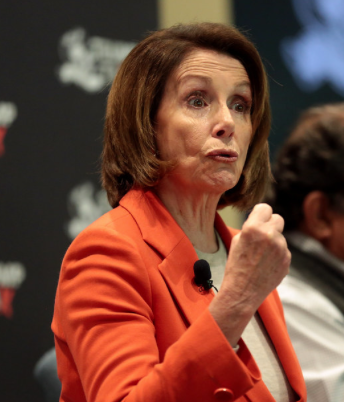 I know a lot of people in Washington DC think Nancy Pelosi is underrated.  After all, she remains Speaker despite a decided lack of charisma and a far younger conference of Democrat members.

The media gives Pelosi high marks for how she’s handling all the impeachment talk among her own members. She walks a fine line.  While they talk impeachment, she talks “wait and see.” She pushes back on impeachment, but says, “nothing is off the table.”  She’s trying to be everything to everybody – at least everybody in her own left of center caucus.

What she’s not trying to be is a good and effective public servant for the American people.  Even while she discourages talk of impeachment, she never misses a chance to insult Trump or lie about him and his Administration.  By doing so she undermines any chance of negotiation, progress, or problem solving.

Nothing gets done, nothing can get done, and that seems to be just fine with Nancy Pelosi.

What I don’t understand is how she can get it both ways.  Oppose impeachment, but accuse the President of the worst possible behavior.

She’s literally accused President Trump of treason.  She suggested his family, or his cabinet, should hold an intervention to save the President from himself.  She’s accused him and his attorney general of breaking the law.  She suggests he should resign or take a leave of absence.  She’s said he’s not stable.  She accuses him of hyperbole when he says there’s a crisis on the southern border, but the next day she declares herself that there is a crisis.

She claimed at one point the only reason he won the presidential race was because the Russians elected him.  She muses Trump might well be a Russian mole. She’s insulted millions of Americans who voted for him exactly because they were fed up with her kind of swamp politics.

She further insults the American people when she calls Trump’s tax cuts a scam.  Really?  A scam? Millions of Americans might disagree. Especially blacks, Hispanics, and women who are benefiting from an economy that’s created more jobs than at any time in history.  And more money in 401K’s than ever before.

Pelosi’s deceit encourages the worst instincts of other Democrats as well.  Adam Schiff, Chairman of the House Committee on Intelligence, claimed he’d seen proof that Trump was working with the Russians to steal the election.  It was a lie.  The Mueller investigation proved it was a lie.  Still, Schiff insists they’ll investigate till they “find something.”

Jerry Nadler, Chair of the Judiciary Committee, likewise has accused Trump of high crimes.  Lately he’s championed the story that Trump and his attorney general are guilty of a cover-up despite the fact they’ve released the Mueller report nearly in toto.  Nadler has yet to produce evidence of any kind to back up his accusations.

Rashida Tlaib has called Trump a motherf*cker while at the same time she and Ilhan Omar commit the worst kind of anti-semitic smears.  Other members blame the border patrol for “atrocities” against migrants and the deliberate murder of children.  Many members call for the harassment and shaming of Trump staff and supporters.

Here’s the truth.  If Nancy Pelosi really believed Trump was guilty of criminal conduct and even treason, she’d rightfully be the first in line to support impeachment.  If she had any evidence at all, It would be her sacred and sworn oath to impeach the president.  But she knows it’s all lies.  And yet she continues the smear, and encourages others to participate, because she knows it’s good politics.  It’s the red meat her leftist base needs to keep donating, volunteering, and turning out.

And because she knows it’s not true, she discourages any actual action toward impeachment. With impeachment, she runs the certain risk of being embarrassed and exposed.

Here’s what I think she’ll end up doing. The way to both climb out of the hole she’s dug for herself, and embarrass Republicans, is to move for a bi-partisan for of censure agains the President.  With a vote of censure there need be no proof.  She need not prove high crimes and misdemeanors.  She need not back up the allegations she and her members make.  She need only get the votes of those who don’t care for Trump’s style — his hyperbole, his passion, his tweets.

But, after all her ugly allegations of treason and criminal conduct, It’s a coward’s way out.

She knows they can’t prove criminal misconduct, but with a bipartisan vote of censure she can claim the moral high ground.  And she’ll likely get it too because there are enough weak-kneed Republicans in the House and Senate who don’t care for Trump’s conduct and will vote for censure never seeing the trap she’s laid for them.

With bipartisan support for censure, Pelosi and all the other Democrats who have made outrageous and untrue allegations will say, “see, we told you so.  Even Republicans agree that Trump is corrupt.”  They’ll mischaracterize the vote itself as proof for all the ugly, untrue, and malicious allegations they’ve made.  And those Republicans who vote “yes” on censure won’t see the ambush till it’s too late.

Like I said, Pelosi is an expert at the inside game.  But she doesn’t understand the first thing about the American people.  Regular Americans will see through all the partisan bickering, back biting, acrimony, and false charges.  They’ll see a censure vote for what it is – a political game that no matter who wins, they’ll lose.  And they’re sick of it.

It’s Pelosi’s partisan politics that are killing the country.  It’s the cynical disregard for the truth; for winning at all costs; for sacrificing honor, dignity, and truth to gain and keep political control – that’s what regular Americans are sick of.

I thoroughly disagree that Pelosi is underrated as a political operator.  I give her all the credit in the world for a masterful game of political one-ups-man-ship.  But at the end of the day, I just don’t think that’s what Americans prize.  I think they want a congress who debates and discusses the issues, who works to solve the problems, who negotiates, and compromises, and finally reaches agreement on the major issues of the day.

Pelosi is too busy guarding her own power to be that kind of leader.  Instead she traffics in untruth, hyperbole, and pandering to get and keep control. She should be ashamed.

In Persecuting Trump, Democrats Make the Case They Are Unacceptable

The Blues and The Rolling Stones