I can’t help but wonder which America Biden is talking about. Is it the America that he and Obama created–an America with a rotting military that kept more airplanes stuck on the ground and cannibalized for parts than it could put in the air? An American military that experienced a massive decrease in the size, efficiency, and readiness of our Naval ships and sailors? An America that “led from behind” as Obama-Biden advocated? 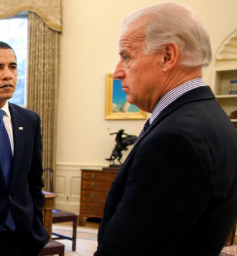 Is it the Obama-Biden America that gave $150 billion in cash to the world’s worst sponsor of terrorism and one of America’s most violent enemies: Iran?  Is it an America where the president and his administration turns their backs on a U.S. ambassador and an intelligence outpost full of Americans in Benghazi while thousands of armed Libyans attacked them?  Are you talking about an America in which Biden and Obama worked to divide Americans around race, income, religion, age, and gender?

Or maybe Biden can tell us this? Does he want to go back to an America in which the highest levels of our nation’s intelligence and law enforcement agencies sought to spy against, and undermine, a presidential candidate simply because they didn’t agree with his politics?

If, on the other hand, Mr. Biden is talking about an America that is economically and militarily strong, there’s good news; President Trump has taken care of it. If he’s talking about an America where jobs are returning; where more Hispanics, blacks, and women are employed than ever before; where manufacturers are finally starting to bring back their factories and their jobs from overseas; and, where trade with other countries is starting to look a lot more fair; there again, I think Biden will find President Trump is on top of it.

And if Biden longs for an America that is again respected in the world; where our allies are starting to pick up their fair share to meet their own security needs; where we are finally standing up against 3rd world thugs like Iran, Russia, and North Korea after years of “leading from behind,” then President Trump is already taking care of it.

But I think most people will agree that’s not at all the America Joe wants back. It seems far more likely Biden wants an America where the President doesn’t communicate frankly and honestly and doesn’t speak directly to the American people, but allows the far left media to determine what people see and hear.

I think it’s very likely Biden is saying he wants a president who doesn’t make waves; who runs roughshod over Congress and the courts; who agrees with the media and the elites that they know better how you should conduct your life; and who doesn’t think pesky irritants like the Constitution, or the will of the American people should stop him from pursuing a far left ideological agenda that erodes our freedom, hurts private property rights, and damages our free market economic system.

In other words, it seems clear to me that Biden wants to return to the failed policies of the Obama-Biden Administration. A return to the same barely functioning economy we knew for 8 years where rather than encouraging businesses to create jobs, they posted billboards directing people to apply for welfare and food stamps. Where a corrupt Secretary of State enhanced her own personal wealth by selling access to her office while jeopardizing our national security putting classified information on a personal network server.

For the first time in a long time, America is back on the path to prosperity, growth, and opportunity.  We’re taking control again of our own destiny, our trade, and our national security. America is moving forward again, focused on the best of our ideals and working to promote peace, stability, and freedom.

I remember a time many years ago when Joe Biden would have agreed with those goals, even if he would have disagreed with the particular means Donald Trump uses to achieve them.  It seemed to me then that Joe Biden cared for America and for our people. I didn’t always agree with him, but I always respected his perspective.

But now even Joe Biden doesn’t remember who he used to be. He’s apologized repeatedly for his past positions and statements; he grovels constantly to the far left who ridicule and criticize him.

He once supported anti-crime laws, now he’s sorry.  For 40 years he supported prohibitions against taxpayer funding of abortion, now he says he was wrong.  A few days ago he said China wasn’t a serious competitor, now he says he was mistaken.  He first claimed the Green New Deal was too expensive and impractical, then a few days ago released his own expensive and impractical environmental plan.  It goes on and on.

Biden’s recent drop in the polls show that people are catching on. Joe Biden is no longer the person we thought he once was.

I could not imagine the former Biden taking cruel advantage of the sick and suffering by promising as president he would cure cancer. It’s astonishing he did exactly that! The old Joe would have affirmed the terrible ordeal of cancer and promised to do all in his power — whatever the election’s outcome — to prioritize the search for a cure. Instead he chose to trade on the suffering of those dying and their families.

It was indecent.  I’m embarrassed for him.

The reaction to that kind of cowardice and political fraud led to President Trump’s 2016 win.  The more we see of Joe Biden, the more it looks as though the same reaction will lead to a Trump victory in 2020 as well.

Dr John: Beyond a Hoodoo Moon

Ann-Marie Murrell: Why Did YouTube De-Monetize PolitiChicks? You Know Why.