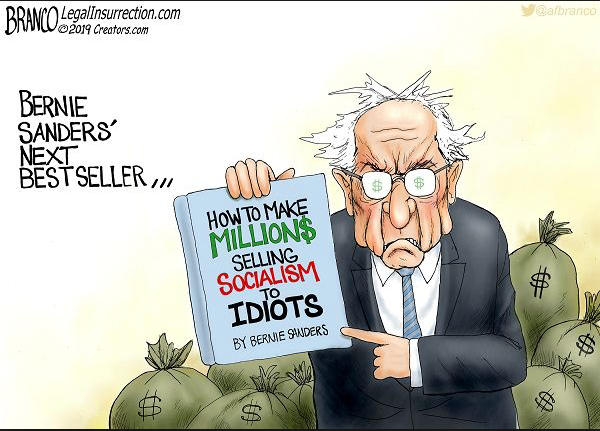 We’re told every presidential election year, “This is the most important election ever.”  And, given the widening chasm between our two major political parties, that’s been true for each election in its own way.

But this time it’s truer than ever.  That’s because for the first time in our history, one political party has pretty much repudiated the economic system upon which our country’s entire economy is based.  What’s more, they’ve attacked one of the most basic propositions of our American way of thinking.

Several of the Democrats running for President openly label themselves socialist. But even those who claim they are capitalists have proposed sweeping changes which would radically and permanently change our system of free markets.

You see it in nearly every proposal they make, but especially in their calls for huge new tax increases and various schemes intended to reorganize the way companies are owned and operated.

You also see it in their calls for additional regulation and oversight of health care, climate control, social security, education, and just about everything else.

What many of their fans overlook is that something fundamental is at stake in their insisting that socialism, or a more “managed” economy, replace free markets.  It strikes at the very heart of our American understanding of freedom – or the proposition that each person’s labor, innovation, and investment should belong to them and them alone.  Instead, Democrats now promote the failed and shop worn notion that any reward for your effort rightfully belongs to the rest of the population and should be administered by the government.

The essence of capitalism is simply that you provide something your neighbors are willing to purchase.  You invest your time, energy, and money in creating that something.  If others find it useful, they buy it.  Eventually you hire others to help you produce it or provide it.  Eventually, those others will gain the skills and resources to provide their own “somethings” others will want to purchase.

Capitalism’s genius is that it puts self-interest to work for the greater good of others.  It promotes freedom, provides opportunity, and encourages not just material growth, but personal and mental growth as well.  This genius also serves to stimulate innovation, progress, and renewal in ways unimaginable with any other economic system.

Just think of your reaction if someone had mentioned Netflix a mere 20 years ago. Or Amazon, Facebook, iPhones, digital cameras, touchscreens, or any one of the hundreds of thousands of other examples we could talk about.  Chances are we would all have said, “Huh, what’s that?”

Of course, for every success story, great or small, there are plenty of failures as well. Most of the time, those people get up, brush themselves off, and start planting the next great idea.

Capitalism doesn’t assume perfect people. Some regulation is still required to assure the system is fair to all players. The difference is that capitalism empowers each person to make their own economic decisions about what they will buy, where they will work, and how they will work. It spreads decision making around to the widest number of people.

Socialism assumes imperfection while putting the most imperfect (the ones willing to vie for control over their neighbors) in charge of everyone else’s economic decisions.

Under socialism, self-interest becomes a tyrant. Those in charge always take the first cut for themselves. They live in the best homes, fly private planes, eat the best of the best, drive the nicest cars, enjoy the finest clothes, and just generally live the lifestyle of the rich and famous. The rest of us get what’s left over.

They justify their perks because it is only through their generosity you have what they provide you.

And should you ever find yourself differing, it is those elites who hold iron clad control of the police and military. No one gets out of line for long.  But you can be sure that eventually you will differ. It may take a few years, but eventually the wealth that capitalism built, socialism runs down.

The elites in charge of government will also take charge of industry and business. Corruption is inevitable. Vast sums are siphoned away, unemployment rises, families are impoverished. Look at any socialist economy anywhere in the world – Venezuela…Nicaragua…Cuba…North Korea.

Margaret Thatcher had it right. With socialism you eventually run out of other people’s money.

Even in its milder varieties; socialist systems sap quality and access. In Canada, health care is rationed. In Europe, free education isn’t worth the price. In Venezuela, malnutrition reigns even among those once solidly part of the upper middle class.

Not long ago Venezuela was the richest country in Latin America, a symbol of capitalist success where abundance was taken for granted. Enter Hugo Chavez on a platform of free stuff. He nationalized industry, investors fled, and small businesses were driven into the ground by high taxes. So long as the price of oil stayed high, the country could coast on socialism while he, his family, and his cronies skimmed a healthy portion of the proceeds for themselves.

But when the price of oil fell, so did Venezuela’s economy. Only then did the voters he’d enticed with envy and greed realize they’d given up their freedom for a false promise.

Today, the people are starving, the currency is all but worthless, inflation runs over 1 million percent per year, and Chavez’s successor, former bus driver Nicholas Maduro, sits atop a crumbling nation stuffing his face while his people perish.

Socialism has put on plenty of faces over the 10,000 years of human history: feudalism, communism, Nazism, and so many more. Socialism as it’s envisioned by Democrats today is really more fascism with a smile. But contrary to what Bernie or DeBlasio or Warren or any of the other socialists running as Democrats promise you, socialism does nothing but lift a few privileged elites while casting everyone else into despair and poverty.

Donald Trump is a capitalist. In his first two years as President, Donald Trump turned everything Obama had spent 8 years doing on its head. He cut taxes, rolled back regulation, held North Korea and China responsible, stood up to Russia and Iran, and encouraged companies to return or keep their manufacturing jobs here. Before you knew it, the American economy was roaring back to life. After 8 years of mismanagement, unemployment hit new lows – historic lows for blacks, Hispanics, and women.  Americans were working again, wages were heading up, and the chasm between rich and poor finally started showing signs of closing.

Kind of reminds me of life in Venezuela before Hugo Chavez was elected on a platform of free stuff.

Do not be fooled. Nothing is free. Everything costs someone something. And if we elect one of the 24 Democrats who want to replace free markets with “managed” markets, it will cost more than we want to pay. The down payment will be the end of the current economic boom. But the ultimate price will be the ruin of the greatest economic engine of progress the world has ever known. That’s a price none of us should be willing to pay.

How Far America Has Fallen: Abortion AT BIRTH!