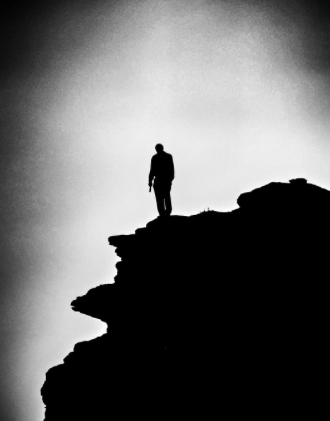 “In deep confusion, in great despair

When I reach out for him, he is there

When I am lonely as I can be

And I know that God shines his light on me”

This is a restless life.  The altars of the fake can attach themselves like leeches in this existence.  But whatever the avatars of artful artifice are selling, I’m not buying.  It is too expensive.  Even when it is offered for “free.”  In this crippling, cultural wasteland of America there is a malaise of the spirit and a need for the spiritual.

I thank God for the Christian roots that my Mother taught me, even when I ignored them.  Those roots gave me the presence of mind to be able to realize the moment when an illusion becomes a delusion.  The older I get, the more I embrace my faith.  However, God the Father and I have not always had the easiest of relationships.

My first doubt of an existence of a benign God was with the murder of my Father when I was eight. Unfortunately, that was the start of a litany of many losses throughout my life.  I took many of those deaths personally and with each loss I silently railed at the heavens.  Yet, as I have matured, I realize that those deaths crystallize both the fragility and the preciousness of this life.

In the course of my grief over my Father, I was blessed in my adolescence to be given a guitar by my dear Mother.  Music helped to save me.

Even with a focus like music in my life, God and I had an uneasy relationship.  Soul wise, playing Blues is an innately spiritual process.  But the path that I followed did not necessarily reflect that spirituality.  Early in my musical career most of the places that I played were your basic dens of inequity. A dark sanctuary for the denizens of the deep night and the early morning.  They were places where alcoholic dexterity was fervently practiced and encouraged.

For example: For a short period of time, in my late teens, I would play one club from 9PM to 1AM, then we would roll our equipment across, literally, a parking lot and play another club from 2AM to 7AM.  Chemical enhancement was the first principle of getting through that punishing schedule.  Meditation and prayer were hidden practices, God was not spoken of except in the most passing of conversations among the musicians that I played with.  In exception of the music itself, it was a pretty empty life.

As I grew older and got better at my craft, I would wonder, is this it? Through it all though, I read profusely and wrote many songs.  Those songs, to paraphrase Bluesman Booker White, were both an acceptance of my existence and a reflection of it.

Maybe it was my actualized noir existence and my constant questioning that has made the life of Saint Augustine interesting to me, both in theory and in practice.  Augustine ended up becoming canonized as a Saint, but he tasted life fully while on this earth. As Mick Jagger sang in The Rolling Stones song, “Saint of Me.”

He loved women, wine and song

And all the special pleasures of doing something wrong”

So Augustine was a touchstone in my search of the American night. I embraced passionately what William Blake wrote about in the “Proverbs of Hell.”  Blake wrote, “The road of excess leads to the palace of wisdom.”  Though I doubt that Blake meant to dance on the edge of excess until you bleed to death.

It took my brother’s 1996 suicide, coupled with a futile, four year carnal search of all things hedonistic, for me to bow my head again before the Cross of Jesus Christ.  I returned to the church of my youth.  I healed.

Ultimately, I never doubted God, I just doubted my worth in his eyes. My marriage to a wonderful woman, Sharon, in 2001 saved me from the fire of my own stupidity.

Now at 62, I have found my way back to constant daily prayer. As I once wrote, It is prayer that separates the moment from the madness that consumes it.  I am still a man of active senses and of profound appetites. It is just that the variety and portions have become smaller with time.

It is our madness that blinds us to the love that God continues to show us. Mankind scurries wildly amidst the continuous divisions in our souls on this bitter earth.

I accept the fact now that the cycle of loss will continue and, more than likely, it will escalate.  I will weep, mourn and remember all those who have touched my heart and above all I will continue to be kind to all that cross my path including animals.

The words that musician Duane Allman wrote in his journal in 1969 remain an inspiration to the principle I choose to live by.  Duane wrote the following:

“I love being alive and I will be the best man that I possibly can.  I will take love wherever I find it and offer it to everyone who will take it.  Seek knowledge from those wiser and teach those who wish to learn from me.”

Those words are on Duane’s gravestone.  I read them first hand in Macon, Georgia many years ago.  They still ring true to the best part of my heart and soul.

I am an imperfect, hard boiled by life, Christian.  I remain humble before God and continue to be a work in progress.  The struggles of this life make the peace of Heaven an attractive aspiration. But I will continue to be a contributing human being, in faithful service, until Almighty God welcomes me home.

The Blues and The Rolling Stones