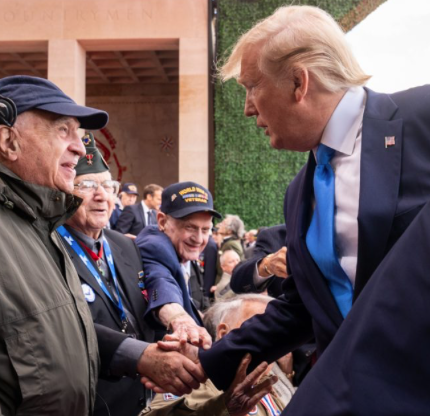 Sarah Sanders, Trump’s Press Secretary recently asked, “Which is the more underreported story of the year, the defeat of ISIS or the booming Trump economy?” Sanders asked the question for a good reason, as the news of Trump’s presidency hasn’t received much attention.

According to the Media Research Center, coverage of Trump on the ABC, CBS and NBC evening newscasts last September, October, and November was more than 90% negative.

Granted, Trump is partially at fault for the lack of positive coverage. Unless a speech is scripted, his style is conversational, which includes rambling, digressions, and of course, Trump rhetoric.  Surprisingly, 93 year old former president Jimmy Carter said, “I think the media have been harder on Trump than any other president certainly that I’ve known about.”

I stipulate that Trump’s style is annoying, and some of his rhetoric forces me to ask, “And where did he get that from?” To Trump’s detractors and to Trump’s own discredit, these are self-inflicted-unforced errors. However, to a Trump supporter, and to Trump’s credit, he takes a ‘blue-collar’ approach, says what is on his mind, and that makes him authentic. I am not writing this to condone or support either narrative; just stating the obvious.

Unfortunately, the age-old battle between Democrats and Republicans continue, but only with an animus that reaches a height not previously witnessed in modern politics. Any success of the Trump presidency is muted, or rather drowned out by such hostility. And that begets the question, “just how successful is the Trump presidency…so far?”  Let’s take a look.

When Trump was a candidate, he gave a number of policy speeches, most notably on taxes, foreign policy, immigration, the VA, Iran, Israel, NATO, trade, and ISIS, to name a few. We would all have to agree, quite a menu.  The very notion that any president, in one term, could tackle or solve all of these issues would have been pie-in-sky daydreaming. But, let’s take a look.

Foreign Policy: Upon Trump’s taking the oath of office, the previous eight years left America’s foreign policy in need of repair; our allies did not trust us, and our enemies did not fear us. What did Trump do? He sent a message that America’s word stands for something and bombed Syrian airfields, and ISIS. Interestingly, he was not criticized or lauded. From the media all we heard were crickets. At the same time, Trump changed the rules of engagement in fighting ISIS; something Obama could have easily done, but didn’t. ISIS is now virtually decimated. Check a box for Trump.

Iran Deal: Having written about the Iran deal, I sided with Trump in that it was probably one of the worst foreign policy agreements made. AIPAC basically stated that it was a clear path for Iran to develop nuclear weapons. Trump canceled the Iran agreement. Check another box for Trump.

Jerusalem Embassy: To the best of my recollection every President since Reagan has stated that Jerusalem should be the location of the U.S. Embassy.  To the unsuspecting, moving the Embassy to Jerusalem has a lot more significance than what appears to be obvious. America’s commitment to Israel has been mostly steadfast. Israel is the last bastion of democracy in the Middle East, and stands shoulder-to-shoulder with the U.S. Candidate Trump expressed his desire to move the Embassy, and fulfilled his promise, again showing the world that America’s word stands for something. Yeah, you can check that box too.

Veterans: For years the VA did not serve our veterans adequately; perhaps I should say the medical care our veterans received was just short of deplorable. It’s no secret but the ‘wait times’ were so long, that the joke ‘one could die waiting,’ wasn’t funny. Trump has solved that issue. Get out your pencil, and yes, check that box too.

North Atlantic Treaty Organization: When Trump called out NATO states for not paying their fair share, and openly opined whether NATO was necessary, many asked, “How can you treat our allies like that?” For Trump, it was easy.  After all, how many former Presidents stated the exact same thing, but did nothing? The answer is, ‘most.’ You, the reader, may not have agreed with Trump’s tactics, but his ‘shaming’ our allies resulted in Member Nations bellying up more than $100 Billion. Before I go on to the next issue, remember to check this box as well.

Gross Domestic Product, Consumer Confidence, & Unemployment Among Blacks & Hispanics: Obama stated that all the manufacturing jobs that left America will not return. He further stated that 2% GDP growth was the new norm. When Congress passed Trump’s tax overhaul, the economy took off. Our GDP growth hovers around 3%, and according to the New York based Conference Board, consumer confidence is at a 17 years high. The Dow has set record highs 70 times, and the market has gained 5,000 points. Along with the lowest unemployment for Blacks and Hispanics, our overall unemployment is the lowest since the 1960’s. Did you check the box?

The Threat of Tariffs: I am not a fan of tariffs. Perhaps if your name is Smoot or Hawley you might like them, but overall, tariffs are losers. Trump knows that. However, in a very cagey way, Trump has used the threat of tariffs to forge trade deals (pending Congressional approval) with Mexico, Canada, South Korea, and Vietnam. China is a work-in-progress. You may provisionally check that box.

American Oil Production: Obama hated fossil fuel. However, oil and natural gas are not going anywhere anytime soon. Trump knew that America, mostly due to fracking, was on an ‘energy tear,’ and recognized that approving the Keystone and Dakota Access pipelines, along with opening a tiny portion of ANWR were key to our ongoing energy independence and success. While not totally the result of Trump’s approving the above, America is now a net exporter of energy. Who would have thought that a mere 20 years ago? You can fill that box with a dab of motor oil.

Art of the Deal: While Trump once proclaimed that there is a border crisis, and the Democrats and media completely rejected that idea, they have come around. Yes, facts can be annoying. Asking Mexico to do their part by threatening tariffs, even I was a bit appalled. But guess what? Trump knew what he was doing. Sure, it may not be your style or my method, but Trump does what works for Trump. Another box checked.

Look, Trump’s combative style may not be your cup-of-tea, and that’s fine. Yet, many of the issues Trump has solved, former president either ignored, or tried and failed. From where I sit, Trump has more wins than losses, and considering it’s been done in the span of about 2 years, that’s not successful, that’s very successful.

Dr. Carolyn A. Roth: What Does God Want (From You)?