Sometimes it’s hard for me to really understand where I stand on certain issues. I consider myself a staunch conservative and believe that we should have the freedom to pursue our lives without unnecessary government intervention. I have always believed in the American Dream…the notion that any American has an opportunity to achieve great things through hard work and dedication. People from all walks of life can and still do achieve that dream. This country was built on capitalism. However, there are now mainstream politicians who are endorsing socialist views.

Our country is a country deeply divided. It doesn’t get much worse than having large numbers of Americans who believe that government is best suited to manage our resources co-existing with those who believe in free enterprise. Adding to the great divide Is the powerful mainstream leftist media. The issue of freedom of the press has become incredibly muddled. It would be one thing if they reported the news in an unbiased fashion. It’s fine if they want to write opinion articles, provided such articles cover all sides of an issue. Instead, the press is now engaged in a war against the President and conservatives in general. It’s plainly obvious that they are deliberately trying to influence people. They don’t even pretend to be objective. I’m all for Freedom of Speech, but the press has crossed the line.

Freedom of Speech, in general, is one of our most sacred rights, but there limits. You can’t go into a crowded theater and yell fire, when there is no fire, simply to amuse yourself. Your right to say what you want doesn’t outweigh the safety of others. One hundred years ago in Schenck v. United States, the Supreme Court unanimously ruled that the 1st Amendment doesn’t protect dangerous speech. I think the liberal media is teetering ever closer to dangerous speech. I see absolutely no restraint in the way they cover President Trump. Everything the man does is criticized without mercy. 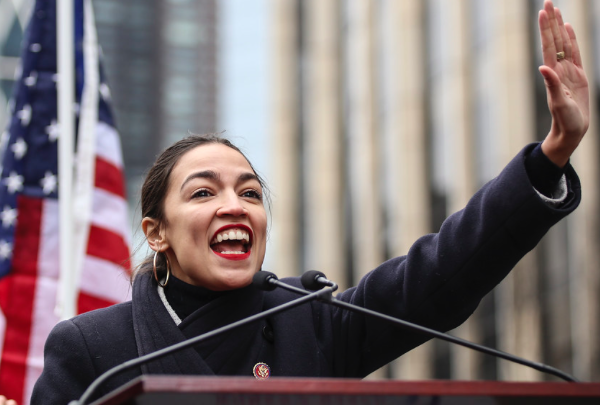 At the same time, the liberal  media portrays extreme-leftists such as Alexandria Ocasio-Cortez (AOC) as heroes. In reality, her ideas are so ludicrous that the press should totally ignore her let alone act as though her ideas are realistic, wise, or legal under the U.S. Constitution. Oddly though, comments she made this week helped me to resolve my personal dilemma over gun control.

Last May I was visiting my sister, whose husband is in the Navy. He is currently stationed in Norfolk. I was there when the shootings in nearby Virginia Beach took place. It really had a profound impact on me because the coverage I watched was coming from local channels. It made it far more real to see an event covered from the perspective of people who live in the area as opposed to a national news crew. At first the details were sketchy. Initially the local channels reported that there had been at least 6 people injured…one critically (they later passed away). Naturally, anyone watching would want to hear that there had been no fatalities.

Then it seemed like the world came crashing down when local officials began briefing the media and announced that 11 people had been killed. I can’t imagine the horror those poor people present must have experienced and the suffering it has caused their loved ones. Twelve innocent people did not deserve to be gunned down simply because someone went insane. I have to admit it made me question my stance on gun control. I have always supported the 2ndAmendment but I started to wonder: ‘Have I been wrong?’

I decided to re-evaluate my stance.  The first thing I did was look at the wording of the 2ndAmendment: “A well regulated Militia, being necessary to the security of a free State, the right of the people to keep and bear Arms, shall not be infringed.” How do I interpret that wording? We went to war with Great Britain because they infringed upon the rights of Americans. If the colonists had no weapons, winning our independence would have been impossible. Therefore I think the intent is clear: The motivation for  the 2ndAmendment was the recognition that government can overstep its bounds. The Founding Fathers took into account that history could repeat itself and if so, the populace would need weapons to protect their rights.

Regardless if it is the government abusing its powers or some other unforeseen threat, tyranny is always a possibility. If a group of citizens are reacting to a sudden and imminent threat and feel compelled to join forces (i.e. form a militia) said citizens don’t have the time to acquire weapons, they need to already be armed individually.

Now, my next question, at least in regards to the Virginia Beach shooting was this: Are semi-automatic weapons and silencers really necessary? The gunman in this case used .45 caliber semiautomatic guns with extended magazines. They were also equipped with silencers. Further, the weapons were acquired legally within the last few years. Therefore, in this situation it could be argued that the tragedy could have been prevented had legislation been in place to ban legal acquisition of such weapons. I struggled with this. Could it be argued that any private citizen needs an AK-47? It’s definitely not a weapon to use if you want to hunt in a sporting fashion. What kind of situation would justify its use? Also, I’m not sure why silencers would ever be needed? What kind of circumstances would require one to employ stealth?

These are really hard questions. It isn’t easy to think of a specific situation where one would need certain kinds of weapons. Could it be argued that it would be better for 100 armed individuals to defend themselves using conventional firearms as opposed to a single individual wielding comparable firepower? With our ever-growing dependence on technology, the existence of advanced unconventional weapons, and the possibility of natural disasters, I think it’s entirely possible that society could collapse for a period of time, during which the use of heavy firepower may be necessary to protect innocent people and ordinary guns to hunt for food.

So I’m left with this: What could the government do that would warrant citizen militias taking up arms? At present, there are militia groups in Oregon who have pledged to protect Republican senators who fled the state senate in an effort to prevent climate change legislation from passing. Per Oregon law, the Governor ordered the senators be found and returned. If they don’t return by June 30, when the senate adjourns, the law will not go into effect. To me, this represents a very serious situation. Ii don’t know all the details, but does a legislative body following established procedures warrant that kind of response?

Thankfully, the investigative efforts of AOC provided me with a resolution to my dilemma. What could the government do that would be so bad that I would feel morally compelled to take up arms against them? The answer is clear. Running concentration camps at the US/Mexican border in the vein of Nazi Germany is clearly a matter that must be opposed by force. Slave labor? Mass executions? Inhumane medical experiments? It’s irrelevant whether we are talking U.S. citizens or not. This is a crime against all humanity. If we don’t stop it, we are all culpable. A member of the U.S. Congress has told us this so we have good reason to believe it’s true. In her own words, AOC said: “…we need to do something about it.’ I agree. Let’s get the militia together and go follow her down there. I’m sure we will meet with heavy resistance from ICE and the Border Patrol but with AOC on our side I’m sure we shall prevail. Who wants the honor of handing the Representative from New Hork her AK-47? Obviously she took into acccount we would need weapons to liberate the victims. Right?

Seriously though, there needs to be a debate on gun control. The hypocritical press will always argue in favor of gun control but they never concentrate on it long enough to encourage meaningful debate. Instead they would rather cover the idiotic ramblings of a nonsensical leftist politician.