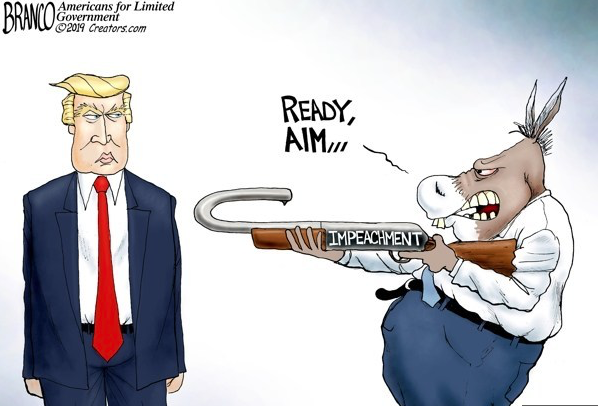 If you were running for President and you had a really great idea, wouldn’t you talk about it?  In fact, if that idea were popular with America’s voters, wouldn’t you shout it from the rooftops?

Or if you were the leader of a political party in Congress, and your party had great ideas to better the lives and well-being of Americans, wouldn’t you promote those ideas, and work to get them passed?

Of course you would.

So why are Democrats so focused on talk of impeachment, the one thing that guarantees nothing else gets achieved, or debated, or even discussed?

The answer of course is in the question. They don’t talk about anything else because they have nothing else to talk about — at least nothing about which the American people want to hear.

Given their paucity of good ideas, Democrats have decided there is only one path to the White House available to them.

The strategy they’re locked on?  Convincing voters that Trump’s presidency is too chaotic, too prone to scandal, and, that Donald Trump personally is too erratic. In short, they have to convince Americans that Trump is unacceptable to be President of the United States.

It’s the only thing that explains all the over-the-top rhetoric.  The hyperbole.  The massive effort to redefine a reality that is otherwise clear.  The reality I’m talking about is the fact that the Mueller report found no, not one, high crime or misdemeanor upon which the Democrats’ calls for impeachment can stand.

The investigators went through two years, 2,800 subpoenas, 500 search warrants, over a million pages of documents, $25 million in expense, and finally, after all that, produced a 448 page report that came up empty.  Nada. No collusion, no charges, no nothing.

The 19 lawyers who staffed the investigation — most all of them anti-Trump progressives, many of whom had donated time and money to Hillary Clinton for President –  came up with nothing more than evidence Trump is often not nice.  Hardly a criminal offense.

Still, that’s the hook Democrats have decided to hang their hats on.  It’s no easy feat.  But it may well be the best they have.  After all, the economy is the strongest it’s been in nearly two decades and unemployment has reached record lows.

So Democrats cry obstruction.  Obstructing what?  There was no crime.  And obstruction requires proof of “corrupt intent.”  The report uncovered none.

They scream coverup.  Of what?  The report in nearly its entirety is available for anyone to read on the internet.

They claim the Attorney General failed. Failed to do what?  His job was to look at the report and decide whether any criminal charges were merited.  They were not.  The report is pretty clear in that regard.  In fact, AG Barr went the extra mile and did something he was notrequired to do – he made 99.5% of the report public redacting only information he was required by law to hold back.

Now they claim Mueller would have brought charges except that it’s illegal to indict a sitting President.  But that’s not what Mueller said in a conference room full of witnesses.  And while it’s illegal to charge a sitting president,  it’s not illegal for Congress to impeach him.  Yet Mueller provided no evidence of “high crimes and misdemeanors” to justify impeachment.

Still Democrats rant on.  And they’re not alone.  They are abetted by nearly every quarter of America’s elite — the media, academia, Hollywood, big-tech, and a huge assortment of special interest groups such as teachers unions, environmental groups, Islamic associations, former Obama appointees and just about every liberal in between.

And let’s not overlook the fact that Trump is often his own worst enemy. He’s seldom diplomatic and far too often defensive when harassed.

And harassed he is.  House Judiciary Chair Jerry Nadler has subpoenaed every tax return, bank statement, mortgage agreement and cancelled check.  So far it’s all come up blank.

Adam Schiff, chair of the House Intelligence Committee at one time insisted he’d seen absolute proof Trump colluded with Russians to win the 2016 election.  He didn’t. The Mueller investigation proved it was a lie.  Nevertheless, Schiff insists he’ll keep investigating till something “turns up.”

And irony of ironies, Maxine Waters who has repeatedly received the designation “most corrupt member of Congress,” chairs the Financial Services Committee.  She has been the most outspoken member of Congress for impeachment since the night the polls closed on his election in 2016.  She’s repeatedly tried to elbow her way into starting her own “official” investigation.

Despite all of the Democrat rants, their total support from almost every nightly news station, their massive investigative powers in the House, their near complete support by elites from Hollywood to Harvard; and even Trump’s sometimes unwitting help in painting himself in a dim light; they’ve not moved the needle of public opinion one decimal point against Trump.

I believe it’s because in the minds of most reasonable observers all the anti-Trump  news from Democrats has morphed from investigation into persecution.

Voters see it as either sour grapes that Trump won and Democrats didn’t; or Democrats are only playing to an increasingly extremist base in an effort to excite their own party’s Trump-haters; or, most likely, that Democrats don’t have any ideas that anyone other than those on the outer fringe of their party are interested in

The strategic flip side of their need to convince voters Trump is unacceptable, is that Democrats must make the case they are.  It will take more than pointing back to the Obama years claiming they are the party of stability, maturity, and proper decorum; especially when all voters see from Democrats is relentless and irrational persecution of the President.

In their frenzy, Democrats may well be making the case not that Trump is unacceptable, but that they are.

How Far America Has Fallen: Abortion AT BIRTH!

Will Censure Be Pelosi’s Face-Saving Ambush On Republicans?