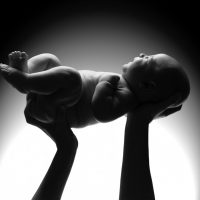 A heartbeat can be heard at 22 days; and yet, there are approximately as many as 15000 abortions that can be attributed to late term! Democrats and Liberals are taking a barbaric position as we evolve into a nation that condones – abortion on demand. More than 50 million babies have been aborted in the United States since Roe v. Wade’s decision in 1973, “that is more than three times the number who were killed in German death camps, Chinese purges, Stalin’s gulags, Cambodian killing fields, and the Rwandan genocide combined.”

In the not so distant past President Ronald Reagan had quite rightly pointed out the double standards here: “Everybody who is for abortion has already been born!”

Priorities are clearly askew. A wall to protect every American is considered immoral, but a new born baby, as it takes its first breath will be murdered – this is a woman’s right, and a politician’s justification for a vote. But this is not abortion; this is infanticide, a crime against humanity!

A number of states, including Alabama, Missouri, Kentucky, Ohio, Mississippi, Georgia and even Louisiana will be next have passed pro-life measures that either severely restrict or ban abortion after six weeks.

However in California, Governor Gavin Newsom has a new message for women who want an abortion “Come to California.” Newsom released a proclamation our state’s easy access to abortion, including the use of our state funds for ending pregnancies under subsidized health insurance plans for disadvantaged people, while U.S. law bans states from using federal money.

There is hope for these children as an anti-abortion majority on the Supreme Court could end women’s constitutional protection against being forced to carry a pregnancy and give birth against their will.

As a Prolife advocate, an end to Roe isn’t guaranteed — I expect Chief Justice John Roberts to allow it to be whittled away rather than overturned. But activists on both sides of the abortion divide agree that the precedent has never been more vulnerable.

Feminists have stated we will not go back to PreRoe America. I do not believe that will ever happen, but infanticide will not be the rule or the exception.

We have to think back to the following words that are attributed to the notorious Margaret Sanger, who spoke of the supposed necessity to eradicate the African American population of America: “No woman can call herself free who does not control her own body.” But there are always two bodies at stake here. And in many cases, the man is also a casualty of abortion too.

And let’s not forget, of course, the implicit racism of the abortion industry, with death clinics filling African American neighborhoods, all directed towards the mass elimination of babies. Can a country survive forever when the children of minorities are consistently eliminated? Does it deserve to?

Part of the problem is the sense of entitlement: our bodies are not simply our property, and we do not just own them like we own a car or a television. They are given to us in trust, to honor and serve others, and to assert our own dignity, rather than to do what we hate.

Thomas Jefferson once wrote, “Indeed I tremble when I reflect that God is just; that his justice cannot sleep forever.” He was referring specifically to another moral atrocity in our history – that of slavery – but I think his words apply equally to abortion today. I love my country, and I want it to be blessed by God. And that is why I do tremble, when I reflect that a just God watches us – is watching us murder babies. I do not ever want my Country to know the wrath of God!

The High Cost of Free Stuff

In Persecuting Trump, Democrats Make the Case They Are Unacceptable