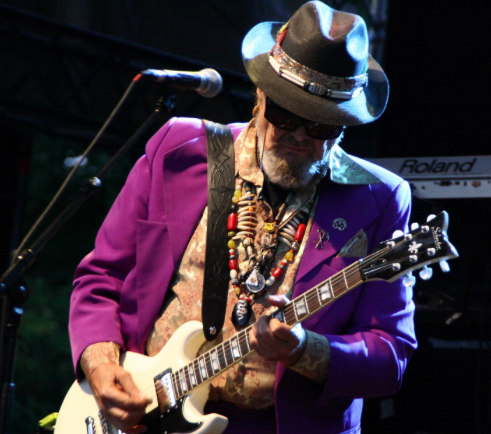 Malcolm John Rebennack, better known as Dr. John, died in New Orleans on June 6, 2019.  He was 77 years old and apparently was the victim of a heart attack.  To say that I respected his music and appreciated the historical significance of Dr. John would be a vast understatement.  I studied and loved his music as an unabashed fan and have found continuous inspiration from Dr. John as a musician.  In the 1990’s, I opened for him twice and was on the bill of several festivals in his company.  Always an honor.

Yet, reading the myriad of obituaries that have been published since the good doctor’s death, I find that most writers are missing the point regarding Dr. John’s importance to the history of American music.  Many writers have focused on the mislabeled “psychedelic” period of Dr. John when he was popularly known as “Dr. John, the Night Tripper.”

In actuality, the Night Tripper period was a short four year period, 1968 to 1972, in a career that spanned over 60 years.  After 1972, he would, from time to time, occasionally wear Night Tripper garb. But, more consistently, the Dr. John of today was styling great suits and hats as he turned down the flame on the Voodoo Gris-Gris stage act.

Early in his career Dr. John was known as one of New Orlean’s greatest guitarists.  Out of necessity, as we will discuss, he developed his secondary talent on the piano into a display of sheer virtuosity that consistently hit the mark.  One of his many gifts as Dr. John was also a great composer, an astute arranger, a sensitive Producer, and an immediately recognizable singer.

In the midst of his persona, Dr. John was so larger than life that many of his fans missed his sterling musicianship.

Stylistically, he covered genres as broad ranging as Gottschalk-like symphonic pieces to Blues to Jazz to Rap to Ballads to Rock, among some of the many styles at his command. In his later career Dr. John was an  Ambassador-at-large for the music of New Orleans and for all the best that City has offered to the world with it’s music.  If you examine, as I have, the vast catalogue of Dr. John’s music I find that there is only one other American artist that has mined so many varied styles of music.  That artist was Miles Davis.

Without a doubt, Miles Davis changed the face of music at least three or four times in his lifetime. He was an innovator.  But Dr. John lived much longer and mined a few more musical genres than Miles was able to.  Though Miles and Dr. John shared one guiding principle in their definition of music. They both would agree there are only two types of music, good and bad.

Looking back at Dr. John’s music made me realize that there is something very special about musicians born and raised in New Orleans.  They are natural in their skin, they are skilled and they are schooled in a school of rhythmic principle that is like a roux to a fine Gumbo.

Dr. John was born Malcolm John Rebennack on November 20, 1941 in the Third Ward of New Orleans.

As a child, his Father, also named Malcolm John Rebennack, would walk him around the neighborhood saying that, “Louis Armstrong grew up around here.”

Mac liked the fact that his Father called him Louis as opposed to “Satchmo” or Louie.  Music was a constant in the Rebennack  household with a sister and relatives that played various piano styles or who sang well.  Mac, as he was called, started playing piano at the age of three.  His Mother, Dorothy, was a talented seamstress and hat maker.

His Father Malcolm owned a appliance repair and record shop.  The records in the shop furthered Dr. John’s musical education. From time to time, his dad would be called into various clubs and nightspots to fix their PA systems.  Mac would go to these clubs with his Father.  There he was exposed directly to local legends as Pianist Professor Longhair and Dave Bartholomew, among a wide range of musicians.

After a childhood bout of Malaria, Mac’s Mother brought him his first guitar at the age of 7.  His guitar teachers included Longhair/Fats Domino alumni Papoose Nelson and local guitarist, Roy Montrell.  Through sheer dedication and determination Mac developed quickly.

When you consider the development of Mac Rebennack as a musician and composer between the ages of 7 to the age of 20, you have to take in account that he worked quite hard at his craft.  By the time he was 14, he was considered one of the best guitarists on the New Orleans music scene.  Before he was 20, Mac was an A&R Man, Producer, Songwriter and session guitarist and pianist for record labels such as Speciality, Ace, and Ric and Ron records. He also played with various bands regionally and in the 24-hours-in a day New Orleans club scene.  He was also the composer of such classics as the instrumental, “Storm Warning” and the immortal, “Losing Battle.”

On Christmas Eve 1961, in Jacksonville, Florida, Mac interceded in an altercation between his singer Ronnie Barron and a hotel manager.  In the course of the fracas, the ring finger of Mac’s left hand was almost shot off.  The finger was reattached, but his guitar playing was never quite the same. At this point, legendary New Orleans pianist, James Booker, helped to sharpen Mac’s skills on organ and piano.

This shooting also escalated a narcotics habit that had plagued Mac since his early teens.  He became a heroin addict, a habit that lasted until December 1989.  In 1962 District Attorney, Jim Garrison, started to shut down many of the New Orleans clubs and nightspots diminishing New Orleans as a tourist town and effectively putting a lot of musicians out of work.  This rupture in the New Orleans Music scene was followed by Mac being busted for narcotics possession.

He did time in a Fort Worth Federal prison drug program and was released in 1965.  With the New Orleans of his youth in disarray, Mac headed to Los Angeles and got work as a session guitarist and pianist.  He worked with Sonny and Cher on recordings and as their road bandleader. He also did many sessions for the infamous Phil Spector contributing to his famous “Wall of Sound” technique of recording.

As a busy session musician, Mac had little time for live performing.  But that changed when he was working with famed New Orleans Producer, Harold Battiste, on a Sonny and Cher recording session.  They had time left over and Mac and a lot of close musician friends recorded a group of songs that became the 1968 album, “ Gris-Gris,” leading Mac to sign a contract with Atlantic records, Sonny and Cher’s label.

Some of the renowned Voodoo Mother’s of New Orleans schooled Dr. John in the language and  practice of Voodoo.  They felt as he was “fronting” for them, he needed to be authentic.

As I stated before, The Night Tripper was a short phase and Dr. John was a continuous innovator in all the music genres he choose to hang his hat on, up until his death.  He had a completed album in the can at the time of his death that features guest artists such as Willie Nelson, Aaron Neville and Rickey Lee Jones.

Dr. John gave testimonials about his addiction and how he beat a 30 plus years habit at many N.A. conventions.  He helped a lot of folks along the way with his story.  He was a consistent and vocal activist for the preservation of the Louisiana wetlands.

I spoke with him for almost ninety minutes backstage at the 1997 Bayou Boogaloo Louisiana Music Festival in Norfolk, VA.  He complimented my playing and the canebrake rattlesnake shoes I was wearing.  He regaled me with a constant stream of stories, ranging from his almost hatred of New Orleans D.A. Jim Garrison to his teenage years when he played gigs for the infamous Marcello crime family.  An infinitely funny and kind man, who was a well read scholar and who possessed an encyclopedic knowledge of New Orleans music.

We will not see his like again. But current and future generations of musicians and fans will continue to be inspired by his music. I am still listening, Dr.

The Tragic Cowardice of Joe Biden