We do not know if the creator of Sherlock Holmes, Arthur Conan Doyle, was a Christian or not or if he intended for one of the world’s best known fictional characters to have religious beliefs. However, we do know from both Doyle and thousands of later writers when writing about the great detective you had to include his brilliant way of analyzing. Facts remain paramount, guess work is not permitted. So one might wonder how Holmes would actually consider Biblical writings and the work of Biblical scholars.

In Second Timothy 2:15 Paul writes that study to be approved is important. The King James version directly uses the word study and the NIV version says the same thing a bit differently. Do your best to present yourself to God as one approved, a worker who does not need to be ashamed and who correctly handles the word of truth.” Essentially it is the same study needed to read and understand scripture. 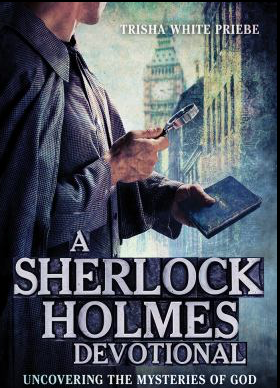 Trisha White Priebe is both a Bible scholar and a Sherlockian and put together A Sherlock Holmes Devotional (Shiloh). Because Holmes is an icon known world wide she used his thinking to explore a number of questions for which there were Biblical solutions, She used numerous situations from the original stories by Doyle and then went into detail about similar things we face and how clear thinking and study would solve them. Now some would say that is stretching things too far, using something from the secular world to relate to Biblical teachings.

Paul was criticized by leaders of the Jewish faith for trying to relate to gentiles and made a great defense of his approach to reach all people for Jesus Christ.

C. S. Lewis was far from above this approach and in addition to his many well known theological books also wrote fantasy and science fiction adventures. His Narnian series have been considered classics and have been made into movies. “Aslan is on the move.” In this world Aslan is a lion representing God and you are riveted from the first book The Lion, The Witch, and The Wardrobe through the series. Lesser known is the Lewis science fiction series, Out Of The Silent Planet, Perelandra and That Hideous Strength. Though I was a church goer when in grade school, I was also a science fiction fan and these three books were my first real introduction to theology. Though taking place in modern times they covered everything from creation to the last days. We also must mention Lewis’s classic Screwtape Letters which only appears to be a fantasy. Hell is depicted as a bureaucracy. No fantasy in this book is as Satan and his demons are very real. 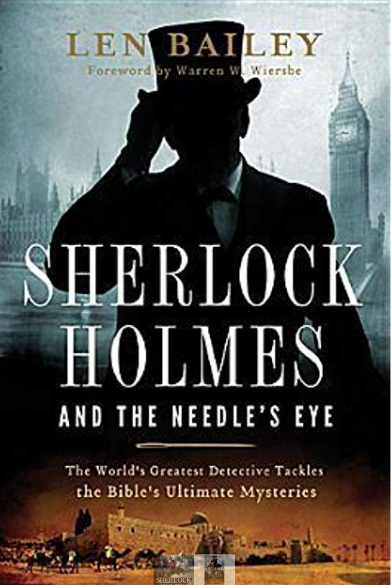 In regard to Sherlock Holmes Len Bailey goes even further in Sherlock Holmes And The Needles Eye (Thomas Nelson). In it the world’s greatest detective is commissioned to solve the Bible’s Ultimate Mysteries. Both he and Dr. John Watson use the famous time machine of author H. G. Wells to go back to various periods of Biblical History to answer questions many scholars have wondered about. Holmes uses the Bible itself to answer questions ranging from why David picked five stones for his sling when one would do to stop Goliath to how did God make the walls of Jericho fall.

My favorite mystery involves the woman who was about to be stoned to death for being caught in adultery until Jesus Christ intervened. In the narrative Jesus wrote three words in the sand, however what was written was not revealed. There have been many guesses, however Holmes comes up with a very likely answer. The stone throwers were not without sin because in Deuteronomy 22:22 the law says “If a man is found lying with a woman married to a husband then both of them shall die- the man that lay with the woman; so you shall put away the evil from Israel.” Though supposition, Holmes believed that Christ wrote a question, “Where’s the man?” Consequently since the woman was captured the man apparently was allowed to get away. In that respect the so called law biding Pharisees had commuted a sin themselves. You may easily question that solution, however it is an example of how answers can be found in the Bible if you are willing to do the research

This now gets us to a topic many churches are looking at more than recent years due to current events, “The End Times.” The Bible is loaded with hundreds of prophesies and theologian Dr. David Jeremiah teaches that through study we find that there has been a 100% accuracy. That includes the many going back as far as Genesis foretelling the first coming of Jesus Christ. There are even more prophesies describing the End Times and the second coming and what will be happening in the future. The very near future many of us believe.

I would cite not just Revelation, but in particular the Book of Daniel which pretty much covers history from ancient times to the present day. My own favorite are the words of Jesus Christ himself in Mathew 22: 1-44. Readers are urged to read what Jesus Christ predicts as they are very detailed and would take many articles to cover.

In my lifetime I have seen things that would have been beyond belief 100 years ago despite the descriptions in the Bible. The first big eye opener for me was the return of Jews to Israel and its rebirth as a great nation. Israel is very central as to what will happen in the last days. The unification of Europe into an approximation of a new Roman Empire, the many anti Christs, false prophets acting as gods, the fact that science is evolving so fast that we see things like microchips suggested to be in everyone’s body so they can be kept track of. The mark of the beast? So much more.

You do not have to be a Sherlock Holmes to study the scriptures and I am the first to admit I do not do so as much as I should. However, the more I follow the news, the more I want to know what God has inspired the writers of scripture to reveal.  Hal Lindsay once said that “when following the news you must have a Bible in hand.“

The Problem of Radicalized Muslims in American Politics