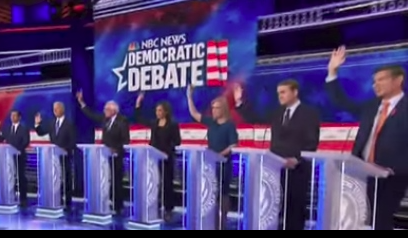 The first primary debate for the Presidential election of 2020 is over. Or maybe I should say “debates” plural. There are so many Democrats running they had to have 2 debates on consecutive nights. I suppose it was inevitable. Like when you know you have to get a shot and dread it. I watched about 20 seconds of the the first debate, enough to see Beto say that he wanted an economy that works for all Americans. With an unemployment rate at historic lows and wages up that is just a stupid statement and I didn’t need to hear anymore. Besides there was a good episode of Star Trek the Next Generation” on which was much more entertaining. So I “made it so” and switched the channel.

Then for some stupid reason, I did watch some of the second night’s debate – for about an hour. It’s time wasted that I will never get back. I guess I could use the excuse that’s it like rubber necking a car wreck on the Interstate. You just can’t seem to look away from it. And I got to see people who don’t have a chance in you know what of ever winning the nomination. Very exciting. Until this debate I had no idea who Andrew Yang was. Or Marianne Williamson. I pretty much still don’t because neither had a chance to say much. Although I will give Marianne Williamson a little credit. When she did speak, it wasn’t like the boring cliches that so-called polished politicians use. I imagine she’ll sell a few books (maybe by the seashore?).

In the hour I watched, this is pretty much what I saw that encapsulates what today’s Democrat Party represents,

There was so much anger and hatred directed at Donald Trump (and by proxy to his supporters) that you could cut it with a knife. I don’t know if these people have told themselves lies so long that they actually believe them or they are just incredibly ignorant and ill-informed, but they are all filled with rage. Bernie Sanders was yelling the whole time. He said, “The American people understand that Trump is a phony, that Trump is a pathological liar and a racist.” Trump is none of those things. In fact, he’s kept more campaign promises than most Presidents in my lifetime.

Gillibrand: “Well, one of the worst things about President Trump that he has done to this country is he has torn apart the moral fabric of who we are.”

Oh, look. A Democrat suddenly talking about morals. Kind of like when they quote the bible. The fact is, the left has torn apart the moral fabric by destroying any concept of morality. Then they have the audacity to turn around and blame us. Bless their heart.

They also seem to hate the country. I didn’t see any positive affirmations of America or it’s citizens.

Whether the subject is health care, climate change (aka global warming, which isn’t happening), illegal immigrants (oops, sorry, undocumented workers), or tax cuts, every candidate on the stage is like a parrot.

“Bwwakkk….climate change will destroy us in 12 years if we don’t act now”.

“We must have government run health care”

“Health Care is a right, not a privilege”

“Trump is a over-bearing swaggering dictator with delusions of God-hood”.OK, maybe that was from Star Trek, but is what they say about Trump that much different?

The Democrat candidates value illegals over US Citizens

One of the most important moments of the 2020 election occurred on that stage Thursday night. When asked if they would support including illegal immigrants in their government run healthcare plan, every single one of the candidates raised their hand.

Wow. If this does not prove how completely out of touch the left is with reality nothing does. I was astounded by it, not so much that they favor this but that they would be so brazen to demonstrate it in front of a national audience.

This is how far left this party has become. And they learned nothing from 2016. Trump won overwhelmingly on this issue and they have just handed it to him again on a silver platter. Say bye-bye to recapturing the Rust Belt. Trump has to be laughing his head off at this incompetence. He even tweeted that the race may be over. He might just be right.

Maybe the next Democrat debate should be held in Mexico.

The candidates at this debate railed against separating children from their parents at the border or putting them in cages. This is phony outrage because Obama started this and there wasn’t so much as a peep from these clowns when he did it. So they can just shut up. Secondary to that, these are folks who bow at the alter of abortion for any reason at anytime. So spare me the lectures about caring about children. You don’t give a damn about children in the womb (or now even outside of it as Democrats in New York cheered infanticide being made legal). This is pure evil.

There is NOTHING NEW in their agenda

Solomon talked about “nothing new under the sun” in the bible. Well, the left demonstrates that. If what they are saying sounds familiar, that’s because it is. The same tired, worn out arguments you heard in this debate was the same things they said when President Bush was in office – and even before that. These people have no ability to change with the times. It’s why Hillary lost in 2016 and why whoever wins the nomination will lose in 2020. Take Kamala Harris for example who said this:

You ask him, well, how are you measuring this greatness of this economy of yours and he talks about the stock market. Well, that’s fine if you own stocks. So many families in America do not.

You ask him how are you measuring the greatness of this economy of yours and they point to the jobless numbers and the unemployment numbers. Well, yeah, people in America are working.

They’re working two and three jobs. So, when we talk about jobs, let’s be very clear. In our America, no one should have to work more than one job to have a roof over their head and food on the table.”

First of all, it is a great economy and the interesting thing she doesn’t mention is that wages are up. But of course that reality would destroy her argument. And by the way, the number of people working 2 jobs is very small. So she is just lying. This is the same type of false argument people were making in 2004 when they claimed the Bush economy was mostly McDonald’s type of jobs. And does anyone else cringe whenever a candidate says “I’ve been traveling the country…”. We know some sob story is soon to follow.

“Hey, guys, you know what? America does not want to witness a food fight. They want to know how we’re going to put food on their table.”

Uh-oh. She said “guys”. Isn’t that an anti-transgender type of reference?

The Babylon Bee had the perfect response to this:

“In fact, it is also false that Americans want Kamala Harris putting food on their table at all. Again, a vast majority of those surveyed responded that they were happy to put their own food on their own table, thank you very much, despite the detailed report from the Harris campaign that outlines a delicious “gruel cube” delivered weekly to every home [for] American families to gnaw on for seven days, providing all the needed nutrients, vitamins, and energy with much less waste.”

And then there is the climate change alarmism that we only have 10-12 years left. They were making the SAME claims back in 1988. Considering it is now 2019 (a difference of 31 years), looks like we made it (as Barry Manilow once said).

Oh, and they called Bush a Hitler and a racist too.

So how bad was this debate? So bad that Joe Scarborough’s hair was mussed up and he said this (believe it or not…):

“If you’re an American and this is your introduction to these candidates and the Democratic Party, and all you see are 12 people yelling at each other, trying to interrupt each other, insulting each other, you’re like, ‘You know what. I thought Donald Trump was a clown show. I’m changing the channel.”

Ted Cruz nailed it as well:

But my favorite comment came from Pat Sajak who tweeted this:

“This could be worse. It could be a dinner party and I could be there.”

I think in the Wheel of Fortune of politics, the Democrats have landed on bankrupt.

Looking After God's Creatures Can Call for Political Action

Running On a Platform of Supporting More Crime