Kelly, who had worked for the White House Council on Environmental Quality, wrote that back in the first year of the Obama administration. It might stun her more to learn that Obama is out of the White House and that the glaciers of Glacier National Park are still there and waiting to be visited.

Throughout the Obama era, visitors to Glacier National Park were frequently harangued with false claims that the glaciers would all be gone in a decade. These warnings decorated dioramas and trash cans even as the hysterical propaganda become more ridiculous with every passing year.

The snow lay heavy on Logan Pass, when I arrived in July 2017. Visitors stomped through thick snow to reach the Hidden Lake Overlook. The alpine meadows of the Hanging Gardens didn’t live up to their name. Instead of the wildflowers that most visitors expected, there were nearly endless fields of white. Mountain goats, unaware that they were threatened by the supposed rising temperatures that were warming Glacier’s glaciers into extinction, eyed us suspiciously as we tried not to slip on the ice.

Sperry Glacier, a frequent target for environmentalist doommongers, was still there in the distance.

Next year, there was a 30-year snow record at Glacier. Snow removal crews in late April were struggling with drifts of between 10 to 20 feet. East Glacier Park Village measured 284 inches of snow. 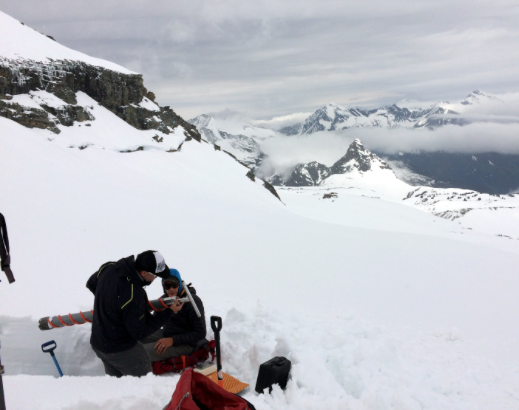 Glacier National Park recorded “one of the coldest winters on record” this year. And across Montana, record wind chill temperatures hit 68 below zero in Bozeman and 59 below zero in Helena. In Great Falls, the temperature stayed below freezing for 32 days until the beginning of March.

In time for the 2019 summer season at Glacier National Park, the embarrassing signs claiming that the glaciers won’t be there next year have begun coming down. But the doomsday predictions won’t leave.

The melting glaciers of Glacier have been the subject of countless media stories and at least one book, The Melting World: A Journey Across America’s Vanishing Glaciers, from St. Martin’s Press, which excitingly promised to chronicle the “the first extinction of a mountain ecosystem in what is expected to be a series of such global calamities as humanity faces the prospect of a world without alpine ice.”

Melting World followed Daniel Fagre, who heads the Climate Change in Mountain Ecosystems Project for the United States Geological Survey, and is the figure most associated with the 2020 number.

Fagre had told the book’s author back in 2008 that all the glaciers would be gone in 10 to 12 years.

The USGS global warming expert has been quoted in media outlets every year predicting the death of the glaciers. He is largely responsible for the comparison photos claiming that the glaciers are vanishing, which he traces back to a visit by former Vice President Al Gore during the Clinton administration.

Fagre has a BA in Environmental Science, an MS in Animal Ecology and a PhD in Animal Ecology. In 1990, the Global Change Research Act was passed. The disastrous law created a massive infrastructure of chicken little “experts” tasked with finding evidence that the sky was falling.

In 1991, Fagre was hired to start to “climate change research program” and wrote a proposal to use the glaciers of Glacier to monitor the impact of global warming.

Somewhere along the way, despite no geology degree, he was deemed a glacier expert.

“One of the first things that we did was we went up and looked at Grinnell Glacier,” he recalled.

In 2010, he told CNN that Grinnell Glacier was “this little dirty glacier that seems to be obviously falling apart, that has become very tiny and decrepit”.

“This one is on its last legs,” he insisted.

But Grinnell Glacier refuses to die. Instead it appears to have been growing.

The photos warning that the glaciers are shrinking are the work of Fagre and Lisa McKeon, who has a BA in Zoology. Neither of the two glacier experts, so often quoted in the media, have geology degrees.

But Fagre is the doomsayer most likely to predict the end of all the glaciers in Glacier. That’s why he and the media were outraged that the “area’s top climate scientist” wasn’t able to “share his expertise on global warming’s role in the retreating ice sheets” with Facebook boss Mark Zuckerberg.

Fagre, who, according to one profile, doesn’t like “deskwork”, loves sharing his “expertise”. And that means predicting that the glaciers will be gone in a decade or two or who knows when.

And the government employee is open about his motives. “My role as a scientist is to make sure that everybody understands the pace at which they’re disappearing, and the reasons for that, so that, again, better decisions could be made societally.”

That’s not the role of a scientist. It’s the agenda of an advocate. The signs and photos warning of a glacier apocalypse at Glacier National Park are political advocacy.

“We get a lot of information visually,” Fagre said. “And we tend to trust that even more than what we hear.”

That’s sensible enough because listening to Fagre speak can get a little bit confusing. Over the years, his doomsday date for the great glacier apocalypse has continued to fluctuate.

In a 2004, National Geographic article, he predicted that “within 30 years most if not all of the park’s namesake glaciers will disappear”.

The glaciers of Glacier National Park are always disappearing. But they never quite do.

Six years later, Fagre claimed that most of the glaciers would be “small insignificant lumps of ice on the landscape”, but these lumps might survive another 10 or 15 years.

Three years after a 2011 chat with Fagre, in which the 2020 figure was cited, the New York Times did yet another piece claiming against that the glaciers are still vanishing.

“What will they call this place once the glaciers are gone?” the 2014 article began. This time it claimed that in 30 years, “there may be none”. That postponed the date of glacier doomsday to 2044.

Fagre was quoted as saying, “I think we’re on the cusp of bigger changes.” Five years later, the biggest change is that the 2020 signs are being replaced.

In a 2017 USA Today piece, Fagre warned that the glaciers would be gone in our lifetime.

“Their fate is sealed,” he insisted.

“What is important,” Fagre emphasized, “is that it will happen in our lifetime.”

According to his conversation with a PBS reporter, “estimates on when the glaciers will disappear completely vary widely, from 2030 to 2080, depending on winter weather.”

Scientists generally care about dates and predictions. The prophets of inevitable doom are cranks.

In a Guardian article in 2017, he claimed that all the glaciers in the country would vanish in the next few decades. “It’s inevitable,” Fagre insisted.

“They will certainly be gone before the end of the century,” Fagre told a CBS affiliate in 2017.

Back then, Fagre had been 49-years-old. He’s now approaching retirement age.

The glaciers of Glacier seem likely to outlive the environmentalist who had spent the bulk of his career predicting their doom. And, if the Department of the Interior cleans house, they will outlive his career.

Women in Cybersecurity: Will the Next Hiring Wave Be More Inclusive?

Dr John: Beyond a Hoodoo Moon