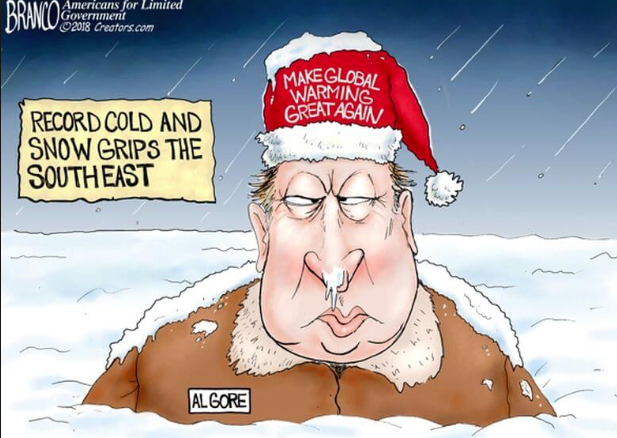 Al Gore predicted the planet’s demise within 10 years if we didn’t move immediately to deal with climate change.  That was 15 years ago.  We didn’t and it didn’t.  Still, I’ve avoided writing about Al Gore’s failed predictions of imminent climate ruin for fear of piling on.

That reluctance was before becoming aware of the Democrat immunity to embarrassment.  Even as his predictions weren’t coming true, Democrats continued to sound the alarm. Today, they’ve reached a fever pitch. It’s as if they didn’t even notice that Gore’s predicted time for climate catastrophe has passed.  They continue to insist that New Yorkers, and just about everyone else within a couple miles of a coast, will soon be swimming to work unless one of their loony multi-trillion dollar plans are enacted to “fix” the environment and arrest the polar meltdown.

Sleepy Joe is no exception.  He’s entered the hunt for the far left environmental vote by introducing his own “all-in” version of the Green New Deal.  He claims it will cost only about $5 trillion over 10 years — far less than Ocasio-Cortez’s plan, estimated at $5 to $7 trillion each year.  Others, though have estimated Biden’s plan at closer to $10 trillion.  Whatever the cost, Biden claims it’s essential to our very existence.  Funny that during his 50 years in Washington he’s not mentioned such urgency till now.  This wouldn’t be political would it?

Central to all their plans, Democrats demand the U.S. rejoin the Paris Climate Accord.  This is the deal Obama bought into that nearly devastates our economy without moving the needle one degree on climate change.  Trump rightly determined the certain cost was far greater than any potential gain and pulled us out of this grossly unfair plan.

First, it’s important to know the Paris Climate Accord was sponsored by The United Nations — hardly a friend of the United States, and mostly dominated by corrupt dictatorships interested in punishing the U.S.

Second, The Climate Accord holds the United States to a much higher standard than other nations while calling for the U.S. to reduce pollutants by 0.26 to 0.28% by 2025; just six years from now.  That’s a far more painful goal that it appears.  It would require we stop all coal mining, ground most airplanes, or curb nearly all our internal combustion engines — from lawnmowers to Chevys.  It would kill our economy and result in less than 1 degree of temperature change by the end of this century.

It would also cripple any chance we have for finding innovative new solutions to climate change by damaging our economy and seriously reducing capital for research and development.

Hobbling our economy is exactly the wrong approach to finding solutions.

Keep in mind that innovation and technology have resulted in the United States reducing our carbon emissions by more than every other country in the world.  Not because we’re part of the phony Paris Climate Accord, but because our capitalist economy is best positioned to reward innovation.

Don’t count on the rest of the world’s economies to take note and imitate our approach.  To most of the members of the U.N., the climate accord isn’t really about climate at all.  It’s just another means to make the U.S. a carbon punching bag and level the economic playing field – not by their raising their game, but by forcing us to reduce ours.

I worry that those who support these radical approaches suffer from one of two conditions. Ignorance or malevolence.  The ignorant simply have no idea the devastation their proposals would wreak against our economy and the economies of every other nation in the world that benefits from our economy.  The malevolent fervently seek that devastation.

Let’s start with radically higher taxes. There is NO WAY a program of this magnitude can be done without everyone paying a lot more.  I know the left insists that only the top 1% will pay, but that’s nonsense. The total amount earned by the top 1% last year was only $2 trillion — barely enough to make a dent in the cost of the Green New Deal.  The total earned by the top 5% was only $3.5 trillion, still not enough.  In fact, to fully pay for the Green New Deal, the government would have to take 50% to 70% of every dollar earned in the U.S. by every worker before it could pay for the cost of the GND – and that assumes eliminating the rest of federal spending.

Next is loss of mobility, travel, and freedom. We are decades away from aircraft that can operate on some alternate energy scheme.  And that fossil fuel or hybrid car you drive?  Say goodbye.   It’s an expensive electric vehicle; or it’s the bus.  Even that assumes only renewable energy sources will be used to generate the electricity your new car batteries need.  Otherwise, expect to walk or bike.

Finally is the complete realignment of our foreign policy and the economic dominance of our country.  Just as we’ve gained energy independence thanks to new technologies like fracking, a shift to all renewable energy will make us beholden to China who dominates in the manufacture of solar systems.  At the very least you can wave goodbye to your air conditioner.

None of these plans make economic or even climate sense.  The enormous cost in treasure, lives, and freedom would be immense. And even if you believe the predictions of Gore (who is 0 for 0 in the prophecy game,) Ocasio-Cortez (a bartender till 24 months ago,) or Elizabeth Warren (she of Pocahontas prevarication fame,) none of these plans would make much of a positive contribution.  That’s because the real offenders of carbon emissions are China, India, Russia, and other mostly third world countries.  It’s not the United States.

The one solution that does make sense is turning a proven engine of creativity and innovation toward finding new solutions.  That’s capitalism — the economic system that has produced more advances in healthcare, technology, and economic well-being than any other system in the history of the world.

I don’t know many people who wouldn’t agree to make changes if they were convinced it was required to avert severe problems associated with climate change.  But most of them are also smart enough to understand that destroying our economic well being in the process would be counter productive.  They’re also fair minded enough to resist the idea we alone can bear the cost and burden of fixing a problem for which others are more responsible.

Daniel Greenfield: A Movement of Professional Victims and Conspiracy Theories