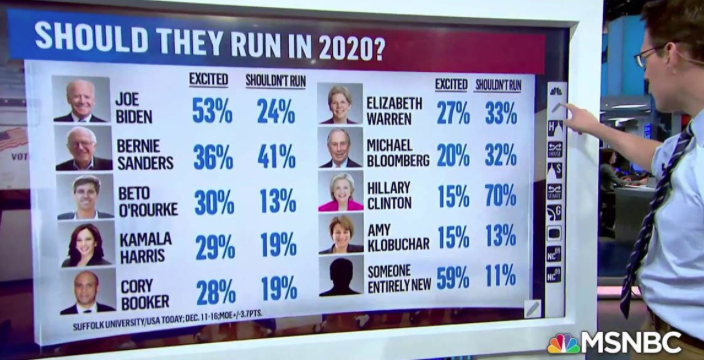 At least so far, there are 23 Democrats competing in the Presidential primaries.  And we thought 16 Republicans in 2016 was a lot.

You’d think with 23 plus candidates on the ballot, there’d be a real choice, but the truth is that despite the differences in gender, ethnicity, and age; the Democrat candidates offer almost no real choice with respect to their proposed solutions.

Varying by minute degree is hardly varying at all; and these 23 candidates barely differ at all on any of the following:

In the last two years, Republican policies have created more jobs for Americans than at any point in the last 50 years; record numbers of blacks, Hispanics, and women are working than ever before; wages are finally moving up; retirement accounts are growing; and the wealth gap between the poor and wealthy has started showing signs of abating.  But none of the Democrats have suggested a meaningful plan to advance these successes.

At their core, each of the Democrat candidates agree that bigger, more intrusive, more expensive, more paternal government is the solution to just about every conceivable problem.

And worse, they believe no matter how you earn it, your money belongs to your betters who prove their grace by allowing you to keep some of it.

Of course, the ultimate choice in 2020 will be the one Americans make between Donald Trump and the eventual Democrat nominee.

Will it be the Mayor of New York who’s high taxes, massive regulations, and inestimable spending on his own NYC Green New Deal are depressing real estate values and driving people out of the city?

Will it be Elizabeth “Pocahontas” Warren who is proposing massive high taxes and even asset confiscation in clear violation of the constitution?

Will it be Barack Obama’s partner in crime, Joe Biden, who boasts he was the original progressive?  Most recently, he suggested China was no security or economic threat at all, “Come on man, they can’t even fix their corruption.”  Hey Joe, neither could the Obama-Biden Administration fix their corruption, and they nearly wrecked our economy.

Or will America really feel the Bern with Sanders as the Democrat nominee?  He once pointed to Socialist Venezuela as an ideal economic and political model for the US to copy.

Maybe it will be Beto O’Rourke who suggests we open the border and let in anyone who wants in with no plan to house, educate, employ, or provide them health care.

Of course, there are plenty more.  It could be the candidate who says she’s running to fight for kids, while supporting abortion right up to birth.  Or the Governor who says we face existential threats if we don’t pass the Green New Deal and massive gun control.  Or the mayor from Florida who believes student loan forgiveness will answer all our problems.  Or the Member of Congress who claims our only problem is Donald Trump.  Then, there’s the self-help author who wants to spend $100 billion on reparations with no idea who to reparate or who will pay. And the former tech executive who thinks the government should give every American $1,000.00 each month for doing nothing.

Or, in the end, will we choose Donald Trump whose candor drives some people crazy, but who speaks his mind, tries his level best to serve every American, and believes what you earn belongs to you?  Will it be Donald Trump whose policies have rebuilt our manufacturing sector, negotiated fairer deals with our trading partners, and restored our military after 8 years of Obama’s neglect?  On top of that, Donald Trump has slashed job killing regulations and re-energized our economy with tax cuts that encourage investment, saving, and consumer confidence.

One thing we know for sure; whoever the Democrat nominee is, when he stands against Trump, we’ll see the real choice.  One candidate who thinks big government should have the power, and one who’s been working to empower individual Americans.  Now, that’s a real choice.  At least for me, it’s a choice I could make blind-folded.

Tlaib and Omar: The Eternal Cry-Bullies

Facebook’s Fun-Police Are A Troubling Sign of the Times