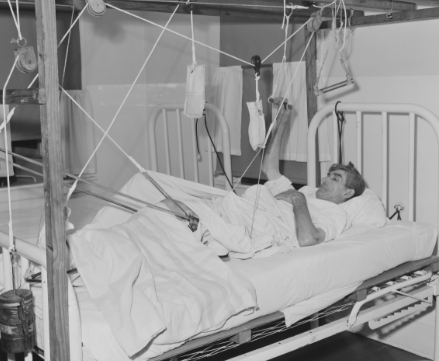 I approach this article with a bit of apprehension as I have been given two opinions by friends in the medical profession. First, and foremost, this is a story that must be told. Second, to be careful not to name specific people or hospitals. I must say that most doctors and hospital staff people I have had experience with in my 83 years of life have been great and a member of my immediate family is in the medical profession. Actually if there are villains they would most likely be administrators and those responsible for hospital funding. I only report what I have experienced and can document.

Some would describe my last two months in which I have been twice hospitalized as a living Hades. As a Christian I have to be careful in my descriptive wording, It is not that I have never been in a hospital, I have had at least half a dozen experiences when I was younger. However people who hear what I have been through are shocked. Some even surprised that I am alive. At the present time I have been running surveys on Facebook and talking with groups like the League of Older Americans (LOA) and find my story is not something no one else has faced. I have heard similar tales from folks in Texas, California, Florida and some places here in Virginia where this is being written.

My story begins two months ago in my home when I found that somehow I had an infection of my left thumb. It began to swell and family members rushed me to ER in a hospital I will not name. I told them my thumb was infected as it was a nasty color and hurting. Aha they surmised “You have pneumonia!” They began to treat me for that when my pulmonary doctor, who thank the Lord was on duty at that hospital, said my lungs were clear. Then they surmised it was the flu as a lot of flu was going around. That too was proven wrong. So twenty four hours later they decided this old guy might rightly be correct in saying he had a hurt thumb and I had surgery. Now how do you connect pneumonia with the flu with a cellulitis infected thumb I will never know.

However the worse horror was yet to come. That was when I learned rival hospitals will not talk to each other or let doctors from the different hospitals consult with each other. I call this next “The Case of Learning What’s a Urinary System?” or “Old Patients are not always Wrong!”

You see as we get older we all develop bathroom habits. Mine get me up at 2:00, 4:00 and 7 AM, the latter being my get up time anyway. However they insisted I was too weak to use the bathroom and must have something wrong with my urinary system. So being smarter than I the staff decided I had to have full time attached to me a Foley Catheter. I begged them to contact my own urologist who knew I could not handle that. They refused. Why? That evil man was connected to a nearby rival hospital and doctors in one were forbidden from talking with doctors in another even if the same patient is involved.

For two weeks I had to wear this contraption even when they heard me complain about pain. But you see oldsters are expected to be curmudgeons and ornery so complaining is normal. Finally once out to the hospital I got to see my urologist and was he ever unhappy. It was a wrong fitting catheter, actually out of date, and caused both a violent urinary infection and an ugly yeast rash. It took very strong meds to get over that. That condition was to stay with through a second time that I had to get to ER.

Another thing I learned was that when in a hospital never take for granted the drugs you are given. Hospitals usually will not let you use your prescribed medicines that you have at home. They have their own pharmacies and assure you that what ever you are taking will be duplicated. Not true! This is hard to check as when I asked for a list of what they were using for duplicates the names often differed. Hence the use of a laptop to check out their medications and I found after the first four days two of the medications I have been on for years were not available. After much wrangling I was finally permitted to bring from home those medications.

Speaking of names, I also learned that at times it is difficult to find out who is in charge of you. I was visited by three doctors at different times. On my last day in that first hospital trip the three met with me as a team. I will not give their names, but tend to think of them as Larry, Curly and Moe. The meeting went something like this. They told me I was ready to be dismissed and asked me some question, My main question to them was, “I see you are a team, who is in charge of my care?” So help me Larry and Moe pointed at each other and denied being the leader. “He’s the leader.” “No, he is, I just follow orders.” “Not really I follow his lead.” So I interrupted, “Then who is the go to person you go to for answers?” That was not understood so I gave up. Perhaps you can see why I named them for a famous team of film comedians.

After a period of time in a local rehabilitation center I finally got home and shortly found my troubles were far from over. The fun and games were to continue.

I developed a swelling in my right forearm which I feared was related to cellulitis. It was painful so once again it was back to ER, the very same one I had just been to in the same hospital. I should have known better.

At first I was told it was a simple thing and I could go home in a couple hours. Actually that turned into an overnight as they could not give me any test for a while and it would be a day before they would have results. A full day went by and they immediately announced that I had a blood clot. All kinds of IVs were put in me and the only thing I could be thankful for was that they let me use the bathroom.

A major point must be made here. My wife Carolyn insisted that she stay with me overnight for both hospital stays and when not with me usually a family member. As we have heard since then patients, particularly older ones, need an “advocate.” Someone to witness all information given verbally and to help go over any paper work handed out. There are times when you cannot get help when you call the nurse’s station meanin that someone has to go from the room to communicate a need to a staff member. We observed a couple times an elderly person in a room not getting calls answered when there was a serious need and Carolyn had to be an advocate for those individuals.

After a day they decided it was not a blood clot after all. It was cellulitis. IV changes were made. My third day there one of the doctors said, we need to call in an infectious disease specialist. I again made a wrong assumption as no such person came and when I asked about it on the fourth day I found no such request was made so I made it myself. One just happened to be on duty that day and he was paged.

Lo and behold, another big change. This doctor just happened to be on hand, a miracle from God I believe, and came by to see me. He announced,”This is not cellulitis this is a bad bump as this person has very sensitive skin at his age. Get those IVs out of him and I will prescribe antibiotic pills.” I humbly asked, “When do you think I can go home.” He replied “Any time, tomorrow at least.”

The hospital was a little reluctant at first and I learned why later from the League of Older Americans. It comes down to one thing, Money. If a patient is released before the hospital determines he is ready to go home and has to come back for the same reason Medicare will not cover. The hospital is usually expected to cover themselves.

It should be mentioned that I hold no bitterness or resentment for seemingly mistakes made as doctors and their staffs are human and I believe they were doing their best for my healing. And I attribute my healing to the good decisions ultimately made and especially to our Master Healer Jesus Christ. Hospitals can be up against it money wise when it comes to staffing and often have shortages on weekends and evenings. Another good reason to have a family advocate with you when a patient.

I must mention one excellent service provided by Medicare that can be better than the hospital stay itself. Home Health Programs. There are many across the nation and the one I credit highly that I have is Encompass Health. I have at least two nurse visits plus tests a week and several different types of therapies every other week day. This is a must. A patient must see if they are eligible for this when they leave a hospital. Next to God, home is the best healer.

This article is written strictly to advise and if necessary serve as a warning.

Stuart Kaufman: Once We Were Slaves