The following letter was sent to us from a friend who works in a field where he has to remain anonymous. But this letter could have been sent from countless other Californians who’ve experienced the same thing. 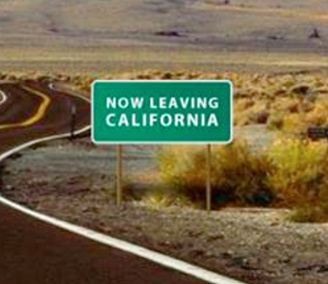 The boxes are filled. The bags are packed. The hearts are breaking.
My family is about to be divided, separated, perhaps forever. I wish you cared.

Our wonderful daughter, along with her husband and their two young children has given up on life in California. The only place they’ve ever called home has become intolerable for them. They’ve found a new home in a southern state, far away from here, in the real America.

I’ve heard the story innumerable times- people leaving, or wanting to leave, what was once the paradise of the West Coast. Not so long ago, kids could walk down to the corner store, or to school, without their parents worrying about their safe return. No more.
You once could visit a neighborhood park, and not fear for your life. No more.
Walking across the street did not require careful examination of the pavement to avoid feces or used hypodermic needles. Now it does.

Illnesses are again being seen in this state that had been rare or non-existent until recently. Typhus, Tuberculosis, Mumps, Measles, Hepatitis A, B, and C are all here again. A worker on the upper floors at L.A. City Hall recently came down with typhus, spread by rats living in the disgusting conditions around the Civic Center.

But you’re concerned that I might ask for a plastic straw.

Your priorities for managing this state are crystal clear, and the middle class is nowhere near the top of the list. I learned in Civics class years ago that the primary job of government is to keep the people safe. What happened? When did our safety and well-being fall off the radar? Not too long ago, my daughter had her new vehicle stolen from her driveway, in the short time it took her to walk the kids to school. Someone was watching, waiting for them to leave. It gives me chills just thinking about it.

You release violent criminals back onto our streets to terrorize our communities, you proudly remove the death-penalty as an option, sending a friendly message to the worst of the worst, and you handcuff our law-enforcement officers, challenging their every move. Officers now must take an extra moment, perhaps just a second, questioning their training and best judgment, before using any amount of force to apprehend a violent criminal. When this results in another dead cop, and it will, the blood will be on your hands, sir.

A few weeks ago, we watched on television as a violent felon led police on a three-hour pursuit, destroying property and narrowly missing pedestrians and other vehicles. We saw him brutally beat his female passenger while driving close to 100 mph. Then last week, a murder suspect shot at police out the window of the car he was being pursued in. It’s a miracle nobody was killed. Turns out, both suspects were free on “early release” through AB-109, that you and other politicians (who all live behind walls, with armed security) forced upon us in the name of compassion. Where’s your compassion for law-abiding citizens, Mr. Governor?

And don’t get me started on taxes and regulations. The amount of money taken from us by this state is criminal. Just living here is expensive enough, but imagine trying to run a business and stay afloat. We have the highest gas prices/taxes in the country, and still our roads are a mess. I recently hit a pothole and the damage to my car was over $1000. We pay you enormous sums to manage the state’s affairs, yet people by the thousands sleep on our streets at night. Homeless encampments are everywhere, in neighborhoods we never imagined they’d be. And still, you want more. There’s a move now to weaken Prop. 13. No doubt it will pass. And I just read that you want to tax online sales now, too. Along with proposals to tax water, telephones, dairy products, fertilizers, health care, and more. But taxing those things will not affect the “super rich 1%”. They’re just more hits on the middle class. You Sacramento politicians have an insatiable addiction to other people’s money. But many citizens have had enough and are walking away.

Which brings me back to my family.

They’re closing their business here. You’ll get no more of their hard-earned money. They’ve purchased a home in their new state, big enough for the four of them and a dog or two. Maybe even a horse. The kids will get a great education. They’ll be able to leave a window open at night, knowing that the criminals are the ones who are afraid- afraid of the police, afraid of the courts, and afraid of the citizens who exercise their right to defend themselves. Oh, and gas there is about $2 a gallon.

Somehow, they’ll have to survive without a Fantasy Train to nowhere, but I’m sure they’ll find a way to get by.

Meanwhile, your tax base shrinks and Atlas shrugs. Soon the only people left here will be the very rich and the very poor. It’s almost as if you planned it that way.

And now, my family is broken. As are countless others. No more school plays, no more little league games. No more weekend breakfasts at IHOP or Thanksgiving dinners. I’ll happily burn a ton of fossil fuel to go visit them at their new home as often as I can. But, I won’t be there as an instant babysitter when needed on short notice, and I’ll actually notice their growth from visit to visit. I’ll pray every night for their safety and happiness in the years to come. And I’ll cry that I can’t hold them tight. I’m angry as hell, and I miss them desperately already.

But they’ll get no going away card from you and no apologies. You simply don’t care.

Daniel Greenfield: A Dozen People Were Shot in Buttigieg's City While He Ran for President

Daniel Greenfield: Americans Paid for the Internet, We Deserve Free Speech On It