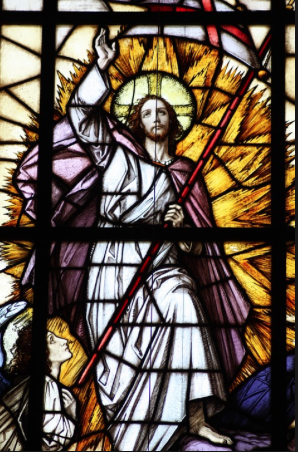 Christian tradition is that in the 40 days following Jesus’s resurrection, he met with his disciples, both men and women. He cooked them breakfast on the shore of the Sea of Galilee, ate with them, and taught them.

Forty days after Resurrection Sunday, Jesus let his disciples to the Mount of Olives. There, Jesus told the disciples that they would “receive power when the Holy Spirit has come upon you, and you will be my witnesses in Jerusalem and in all Judea and Samaria, and to the end of the earth” (Acts 1.9 English Standard Bible). Jesus’s words about the Holy Spirit came true at Pentecost, 10 days in the future from his ascension. In the two millennia since Jesus spoke these words, Christian missionaries took his words throughout the earth.

After Jesus said these words to his disciples, he was  lifted up and a cloud took him out of the disciple’s sight. While the disciples watched, two men (probably angels) appeared beside them. They asked, “Men of Galilee, why do you stand looking into heaven? This Jesus, who was taken up from you into heaven, will come in the same way as you saw him go into heaven” (Acts 1.11 English Standard Bible). These angelic words are the inspiration for descriptions of how Jesus will return to earth at the second coming.

Often symbols of Ascension Day contain some type of movement, perhaps reflecting Jesus’s movement from earth to heaven. Symbols include a depiction of the  ascending Jesus, flying birds, Elijah’s fiery chariot, a lion conquering a dragon, open gates, and a broken chain. Each signifies access to heaven.

Catholic Christians have identified Ascension Day as a “holy day of obligation” with the expectation that Catholics attend church that day. They believe that Ascension Day signifies Jesus leading the way into heaven. Left to their own power, individuals don’t have access to heaven. After ascending into heaven, Jesus is on God’s right hand, a place of majesty and power. There, Jesus makes intercession for Christian’s lives.

In the United States Ascension Day/Sunday can be celebrated in a variety of ways:

Throughout the globe, many Christian nations identify Ascension Day as a national holiday; however,  on Ascension in the United States of Americagovernment offices, banks, stores, etc., are open.

Ascension Day traditions which are distinctive are:

CAIR: Where Kafirs and Women Need to Know Their Place

May 25 Is World Multiple Sclerosis Day: For My Family and Me, It's Personal