I don’t know what evil deed I committed to obtain my place on the DNC’s fundraising mail list, but whatever it was I regret it deeply.  In the event you are not so unfortunate, let me share with you the survey I just received from the Democrat National Committee (DNC.) 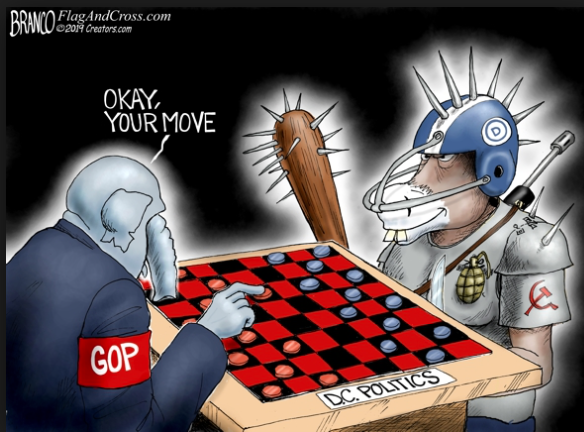 The survey I received was clearly not intended in any way for a non-biased response, or even a liberal bent.  Nope. It’s an out and out pander to the true socialist believers who make up the core of the base of Democrat small dollar donors these days.

To wit, here are examples of their questions.  (Translation, courtesy of me.)

When asked about the respondents priorities:

Seriously, it’s like they’re speaking a foreign language.  They say something that looks like English, and even sounds pretty good on the surface, but that’s not at all what they mean.

Gun safety and protecting our schools are my favorites though.  On the surface, it makes perfect sense to say real gun safety only comes when you take everyone’s gun.  But wait.  Is it really safe if the only people who don’t have guns are the law-abiding who turned their guns in?  Is it safe when the only people who do have guns are violent criminals who refused to turn over their guns?  Are the citizens of Venezuela safer because in that country only the military has guns? So yeah, I support gun safety.  To me that means the only way to stop a violent criminal with a gun is to make sure law abiding citizens have guns.

And when they say “protect our schools,” who’s schools exactly are they talking about?  They’re certainly not talking about the tens of thousands of minority families who’s children happily attend high-performing, non-union, charter schools. Or the many thousands more minority families who are on waiting lists for those schools because Democrats won’t approve charter expansion.  No. The schools they want to protect are those where teacher unions rule.  The worst schools in America.  Do I want to protect those schools?  Do you?

Then they ask which Republican policies do you find most troubling:

You can see how Democrats will govern if they take the White House and win both houses of Congress.  Government health care, open borders, citizenship for all illegals, no school choice and job killing regulations on business.

They then ask what aspects of the Trump presidency do you find most disturbing?

Then their survey asks what you’d like to see a Democratic president do once elected in 2020.

Everywhere you turn the Democrats-turned-socialists want to control as much as your life as possible. They don’t care about you, your family, or your future; they only care about getting and keeping power.

If you care at all about freedom, prosperity, and justice; then Democrats ought to scare the hell out of you.  If they don’t, then you’re not paying attention.

Daniel Greenfield: The Brainwashing of a Nation

Daniel Greenfield: Should Cory Booker Pay Slavery Reparations to Himself?