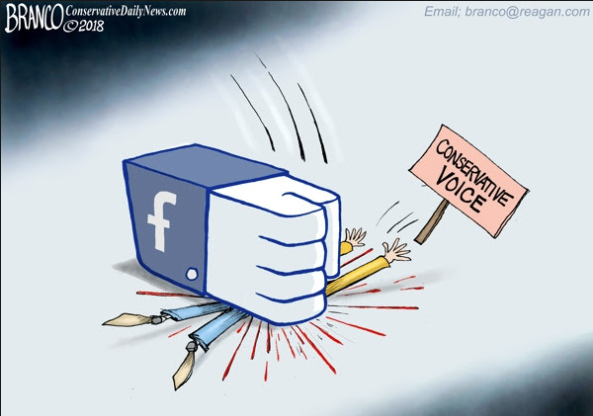 Facebook was once an open forum where you could rant, poke fun, voice your opinions, and just generally release your frustration about the state of politics in America (or anywhere else for that matter.)  And you could do it all without the politically correct scolds of the leftist “fun police” shaking a finger or running you from the room.

Today, that’s changing.  Facebook’s free speech platform with its sharp elbows, rowdy behavior, and noisy commotion is morphing into a safe sanctuary where the weak, everyone-wins-a-trophy, crowd can experience constant affirmation among their own.

It’s a sign of the times and it may not be as benign as you think. That’s because Facebook is only reflecting a troubling move by “woke” leftists toward justifying condemnation against those who disagree with them.

The problem is that the left, Facebook included, conflates the terms “violence and hate” so any conservative guilty of calling out a liberal for a dumb statement or issue position is not just hateful, they’re guilty of inciting violence.

A few weeks ago, when the first reports of the fire at Notre Dame in Paris surfaced, I sent a quick post suggesting that if it was proved the fire was set by Islamic extremists, we should consider bombing Mecca. Notice, I said, “IF” they attacked Notre Dame we should retaliate.

It didn’t take an hour before Facebook notified me my account was suspended for 30 days.  Wow, no appeal, no recourse, you are guilty till proven innocent – with no simple way to contest innocence.  Do not collect $200, go straight to Facebook jail.

And just for the record, is it all that unreasonable to consider the possibility of Islamic extremism given the attacks by radical Muslims in France over the last three years?

If I’d written something similar in past ages — say, a letter to the editor in 1941 suggesting that if the Japanese bomb Pearl Harbor, we should bomb them back; I doubt whether anyone would have complained.  In fact, I might well have been awarded a medal if there is one for such a thing.

In fact, Facebook has banned a wide variety of people lately – most of them conservatives.  I’m talking about people like Laura Loomer, Alex Jones, Paul Joseph Watson, and Milo Yiannopoulos among others.  Facebook claims they only ban individuals and organizations that promote or engage in violence and hate, regardless of ideology.

Now I very often find myself absolutely opposed to Loomer, Jones, Watson, and Yiannopoulos.  But I hardly think I’m in any danger of being incited by their posts, even when I agree with them.

The real problem is one Facebook doesn’t even see.  In the mainstream media today, there’s no such thing as a rational conservative.  If you don’t agree with their leftist ideology, and even more certainly if you challenge them in any way, you’re labeled alt – right, nationalist, and extremist.

I’m sure that’s how Facebook justifies their censorship.  We’ve seen it before, but it wasn’t really thought acceptable in polite society until Barack Obama made it so.  When he condescended to understand why we cling to guns and religion … when he governed by executive decree refusing to even talk with Republicans … when he lib-splained how he knew better on health care, international relations, economic policy, and so much more … he was in fact discounting the right of those who disagreed to hold opinions contrary to his.

We saw the chilling result of that attitude in action when his IRS appointee denied tax status to conservative organizations working to promote conservative ideas and candidates.

Even scarier, we saw it again when his appointees at the FBI and the Justice Department used their police power to launch an investigation into President Trump’s campaign on thoroughly phony grounds.

Facebook’s censorship isn’t quite as egregious as using law enforcement in a partisan attack against your political opponents.  But it nevertheless betrays a certain kind of dangerous arrogance.

When I was a child, I was frequently bullied because I was the fat kid in school. I didn’t like it.  Frankly, it hurt.  But rather than cry to the closest adult, I used it to improve.  I lost weight, put on some muscle, went out for the football team, and ended up playing quarterback. If you’re over 40, you probably know what I mean.  We sucked it up and used it to toughen up.

Clearly times have changed. Listen to Bernie Sanders for 5 minutes and you’ll hear a rant about the insensitivity of the alt-right nationalists who are secretly conspiring to oppress the poor and prevent his presidency.

I think the worst offenders though are the newest left-wingers in Congress. Alexandria Ocasio-Cortez regularly accuses people who don’t see things her way of intentionally fomenting violence against her and other women of color.  Omar suggests that if you don’t support the annihilation of Israel, you’re guilty of dual loyalties.

It’s ridiculous. It’s surreal.  And it inevitably leads to the kind of thinking that allows Facebook to silence the voices of those with whom they disagree.  Happily for us, about the worst thing Facebook can do is kick us off their platform.

That’s not the case with leftists.  If they capture the levers of government control, they can, and given their present attitude probably will, pass laws that use the legal force of government to penalize and imprison those of us who dissent from their ideology.

Any leftists who might accidentally stumble on the previous paragraph will no doubt claim I’m trying to incite violence against them.  That’s not true, but they won’t believe it.  They don’t understand that we can wish their person well, and still speak forcefully against their ideas. It’s not hate. It’s free speech.

The 23 Candidate Democrat Primary: The "No Choice" Choice