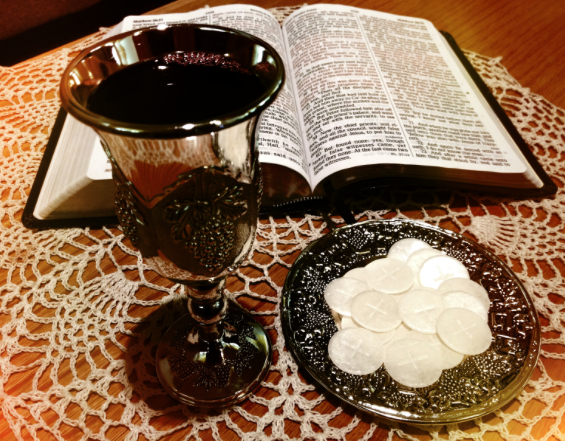 As the pastor finished his sermon and before the Eucharist was consecrated, he said,  “Communion is a political act.”

Well, that statement refocused my wandering mind. My immediate thoughts were, “What? Communion—a political act? Surely not! Shouldn’t communion be the ultimate apolitical interaction?”

His response was that when Christians take communion, they identify Christ as their Lord—as their God. Referencing back to first century Jerusalem, Caesar was emperor and god. By declaring Christ as Lord and God, early Christians averred that they had a greater allegiance than to Caesar. Thus, when early and today’s Christians consume the body and blood of Christ (the Eucharist) they proclaim Christ is God. Christ has their  primary allegiance. Allegiance to God is greater than allegiance to a country, a political party, or a religious denomination.

Certainly, I understood this historic perspective, but I wanted to know more. Is communion a political act today? Everyone knows that Caesar was never a god. What do other ministers think about giving communion today? What do politicians think?  What does the rank and file Christian in the pew think?

Next, I did what any modern woman would do—I completed a Google search with the parameters of “communion” and “politics.” My aim was to reveal if and how the sacrament of communion is a political act in the 21stcentury.

But, before I share my online-research results, let’s review what communion means to Christian believers. Three main perspectives exist about bread and wine that are consumed in communion.

First, communicants consume the actual body and blood of Jesus. When the priest consecrates the bread and wine, they take on the substance of Jesus’s body. The bread becomes Jesus’s flesh and the wine, his blood.

Second, when the bread and wine are consecrated they become the “real presence” of Jesus, but are not in actuality his flesh or blood.

Third, communion is a memorial act in which Jesus is remembered; his body was broken and blood shed for mankind.

In all three perspectives, Christians eat and remember Jesus’s sacrifice as they consume the bread and wine. Communion is a sacrament, a religious ceremony or ritual, regarded as imparting divine grace. I don’t know about you, but I need all the divine grace I can get.

The question is: Does any person, minister, politician, or guru, have the right (authority) to withhold God’s divine grace from an individual coming to the communion altar?

The phenomenon of withholding the communion sacrament to notorious sinners goes back to the early church before the Middle Ages. In Lent, the time of sacrifice and abstinence before Easter, notorious sinners, separated from the church because of their blatant sins,  were called to repent. After this time of repentance and reconciliation, these sinners were again welcomed to the church and to communion with God and with fellow believers. Likely, blatant sinners not receiving communion was a combination of their personal choice and decision of the parish clergy or bishop.

In 21stcentury United States, clergy have refused the Eucharist chiefly to two groups.  The first group is individuals who do not support sanctity of life. They are asked not to come to the communion table. Usually, these individuals are vocal supporters and voters for aborting babies in the womb.

The second group that have been denied communion are individuals who are homosexuals. Many Christian churches believe that the Bible identifies homosexuality as a sin. Openly homosexual individuals are asked not to come to the communion table and/or refused communion by the presiding priest/minister.

The though process underlying refusal to give these groups communion is that both are out of communion with God and members of the church.

It seems that for many centuries even millennia, communion has been a political act. Whether or not this sacrament should or shouldn’t be political is another question. I am a pro-life, hetero-sexual woman, and an abject sinner who needs the eucharist to help me deal with life.

Let me go back to that earlier conversation I had with my much-loved pastor. He noted that in his 25 years of being a pastor, likely he gave communion to individuals who approved of abortion. I tapped him on the foot and said, “Yeah, that was me.” Only recently did I reject the abortion platform.

I believe that communicating with God in the eucharist helped me to develop the mind of Christ. Communion is a political act; however, more and more I am convinced that communion should be apolitical. If an individual wants this communion with God, they should have an opportunity to receive it.

Contempt of Congress: Render Unto Caesar?