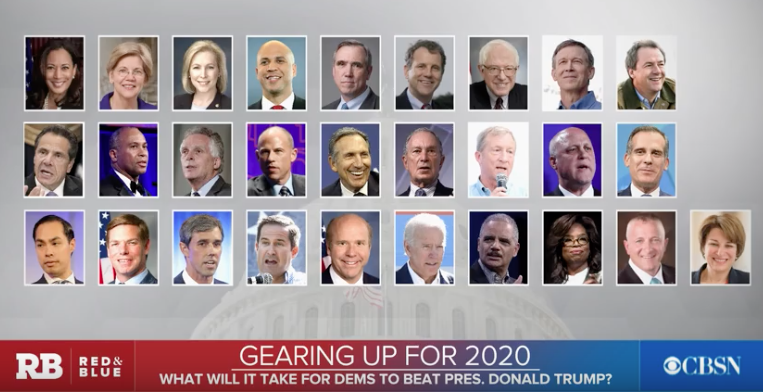 I like horse races.  Maybe that’s why I like politics.  In a horse race, as in political campaigns, almost anything can happen.

Remember 2008?  In the Democrat Primaries, Hillary was the front-runner from beginning to almost the end.  The same was true in the general election of 2016. Hillary almost won.

But in politics and horse racing “almost’ isn’t good enough.  In reality, she might as well have been scratched from the race.

In fact, sometimes crossing the finish line first isn’t even enough.  Who can forget the Kentucky Derby earlier this month?  Maximum Security, the favorite to win, crossed the finish line first, but was subsequently disqualified for swerving and causing two other horses to check strides. As a result, Country House, a total 65 to 1 long shot was declared the winner.

As of today, there are 24 horses lining up to become the Democrat nominee for President.  Son-Of-Obama-Biden seems to be in the post position (the post position is the best position.).  The rest, ironically enough, are lining up to his right.  The newest entry, Even-My-Wife-Has-Doubts-deBlasio of NYC, has been stumbling amid the jeers and laughter from the crowd.  He’s probably on this way back to the stables.

Many thought Fill-The-Bern would be next in line after Son-Of-Obama-Biden, but turns out the Bern may be too old for all those “woke” leftists in the stands. The smart money says Fill-The-Bern is headed for the pasture since no one’s agreed to pay his outrageous stud fees.

In the meantime, Pocohontas-Warren and Hey-Man-Who-Snaked-My-Skateboard-O’Rourke seem to have come up limp after poor opening workouts.

With Fill-The-Bern’s dotage apparently coming on, it looks like the number two gate might go to Kamala-The-Socialist-du-Jour.  Frankly, I’d find the prospect of electing Ms Harris the first black female president rather thrilling if she wasn’t so far left.  The last Democrat we elected President promised us he was a moderate, then turned out to be far more liberal than he’d ever admitted.  It was disappointing to say the least.  How much scarier to elect Ms. Harris who’s actually warned us of her far left inclinations from day one.

Kamala Harris is running on her support for the same silly socialist platitudes being kicked around by all the other leftist Democrats – a Green new Deal, nationalized health care (along with a ban on private insurance,) eliminating Trump’s tax cuts, and increasing federal control of business with punishing regulations.  It’s the same old failed formula of bigger government, more debt, higher taxes, and a devastated economy with fewer jobs and lower pay for America’s families, especially working families.

Ms. Harris has even proposed a new federal program that forces businesses to report how much women are compensated compared to men.  And yes, I believe businesses should pay women the same as men for the same work, but do we need to force businesses to do so?  Or should negotiations over compensation be part of a free market?  With 3.6% unemployment, good prospects can demand fairness.

And do we really need to hire hundreds more bureaucrats to monitor wages and earnings based on gender?  And if those bureaucrats decide on criteria they alone dictate to determine a business is not in compliance, they’ll have the power to penalize that business right out of existence.  How does that help employees whatever their gender?  Big government over-reach is NOT the solution.

Like all the other Democrats in the race, Ms. Harris would also like to restrict gun ownership.  She’s proposed a national gun owners registry with which the law abiding would register any weapons in their possession.  The people who would NOT register, mostly violent criminals and the mentally handicapped, would keep their guns when, and if, the government ever decided to confiscate them.

I guess the question most Americans need to ask is whether they’re really ready for mainstream socialist programs?  And, if they are, at what cost?

Apparently, all these candidates are in the race because they hate the fact that the rest of us have jobs, rising wages, and lower taxes — especially the minorities who are benefiting most from this economy.  I don’t know what their problem is with this reality other than they seem to miss the misery of the Obama years.

I’d say that right now it looks like it’s Son-Of-Obama-Biden’s race to lose.  I don’t see how you could give Kamala-The-Socialist-du-Jour odds better than 4:1 in the primary.

In the general election, my money’s on Donald Trump.  I just can’t help believe once Americans realize they’d have a lot less of it but for Trump’s economy, their money will be on Trump as well.