A ban on skyscrapers. Wind turbines in the middle of one of the most overcrowded and noisiest cities on earth. Billions in building renovation costs. Stopping natural gas. Shutting down all the power plants.

The Green New Deal is coming to New York City.

“We are going to ban the glass and steel skyscrapers which are inefficient,” Mayor Bill de Blasio announced on MSNBC.

That was the first warning most New Yorkers got of what their radical city government had wrought.

“We’re actually making the Green New Deal come alive here in New York City,” the leftist mayor explained. As if anyone except for Rep. Alexandria Ocasio Cortez thought that was a good thing. 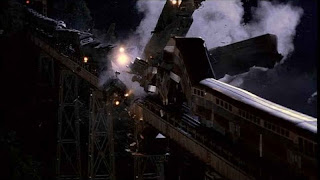 The Big Apple has no cows to ban. And without planes, it would be cut off from the rest of the planet. But its version of the Green New Deal will still find dozens of ways to make New Yorkers miserable.

Bill de Blasio claimed that the city would switch completely to ‘renewables’ in only 5 years. That would be a spectacular achievement since neither solar nor wind energy work all that well in New York.

New York ranks 47 out of 50 states in average sunlight hours at only 3.79. It’s windier than it is sunnier, but still only comes in at 28 out of 50 with an average annual windspeed of 0.05 miles per hours. Turbines need winds of 10 miles an hour to start working and city winds are not only erratic, when they blow, they come from different directions, making conventional wind energy setups all but useless.

The New York Times even noted that the city’s turbines were for show, with the builder of the city’s first wind turbine building installation admitting that they barely did anything. “On a good day, there’s maybe enough energy to power the common areas,” he said, “but we don’t get a lot of good days.”

“Our installers spend more time convincing people not to build turbines than to build them,” New York State’s turbine program director said. “The conditions really have to be ideal.”

But now there are a whole lot of mandatory wind turbines coming to New York City’s rooftops.

One of the Green New Deal bills mandates either solar panels, plants or wind turbines on roofs. There’s also a bill pushing large wind turbines. Aside from killing birds, wind turbines make lots of noise. And they have been known to catch fire or collapse. When that happens, metal can turn into shrapnel that has been known to travel for as much as a mile. Who needs terrorism when scrap metal from a badly installed wind turbine rains down on Manhattan commuters?

But that won’t stop New York’s version of the Green New Deal, the Climate Mobilization Act. The Act is a package of 10 bills, three of these include massive building retrofits, including the so-called ‘Skyscraper Ban’, that would force major revamping of even existing buildings, while also creating a loan program.

7 others call for a study on replacing the city’s 21 power plants with solar, wind and batteries, mandate turbines and solar panels on roofs, and stop a pipeline meant to bring natural gas to New York.

The skyscraper ban meanwhile targets buildings over 25,000 square feet with fines if they don’t reduce energy usage. That’s why Bill de Blasio was announcing the end of the glass and steel skyscraper.

One of De Blasio’s flunkies estimated that it would take $4 billion in work to meet those targets. That’s heavily optimistic and unrealistic. It may easily cost a hundred times that and still fail because its targets can’t be met. And the plan depends on believing that its existence will create an energy efficiency boom. The technology and financials that will enable it to work will come into being because of its existence.

But the skyscrapers aren’t actually going anywhere. Middle class housing is another matter.

If your skyscraper is using too much energy, you can offset it by buying renewable energy credits. It’s the same old scam in which a fake crisis is used to feed money to powerful green energy donors.

“To get down to even 20 percent from where I am today, with the technology that exists, there’s nothing more that I can do,” a co-op board president said. “It’s not like there’s this magic wand.”

They can dig into their fixed incomes to buy “renewable energy credits” from green billionaires.

That’s what the Green New Deal and every environmental measure comes down to. Rent seeking regs are used to steal money from the struggling middle class and put it into the pockets of wealthy lefties.

Mayor Bill de Blasio, in traditional radical fashion, is selling this as a crackdown on the skyscrapers of the wealthy. But the ugly reality is that it’s stealing money from senior citizens to give to green investors.

Stopping a natural gas pipeline won’t hurt the city’s new elites. It will be the senior citizens that will freeze. Tight energy use regulations won’t keep Rep. Alexandria Ocasio Cortez and the rest of the expat hipsters from using central air, with wind turbines on their building roofs for show, but it will mean that working class New Yorkers won’t be able to run their air conditioners in the killing summer heat.

These regulations will squeeze what’s left of the city’s middle class out. They will make it impossible for anyone who isn’t wealthy or on welfare to remain in New York City. That’s what they are meant to do.

“We are on the precipice of climate disaster, and New York City is acting,” City Council Speaker Corey Johnson declared.

New York City is on the precipice of disaster, but it isn’t caused by the climate, but by the Coreys.

“I remember the devastation of Hurricane Sandy like it was yesterday. There weren’t many climate change deniers left in our city. Not after that,” Mayor Bill de Blasio tweeted.

Hurricanes are a reality of living in the region. What made Sandy so devastating wasn’t climate change, it was the ineptness and poor planning of city, state and federal authorities who failed to prepare, provide aid or produce a plan for dealing with a natural disaster. Blackouts that took down the power grid, including hospitals, occurred because power plants had been positioned right next to the water.

New York City is still recovering from Hurricane Sandy, not because of climate, but because of government mismanagement. Instead of building an energy grid and communications infrastructure capable of coping with a hurricane, billions are being diverted into a bizarre plan to change the weather with fines and taxes. No matter how many fines and taxes are imposed, the weather will not change.

What will change is livability.

The emissions caps will dramatically raise the cost of living in New York City. It will eliminate all housing except that geared to the wealthy and the welfare class. It will also push more businesses out of the city. And that will take more jobs out of a city that already barely has an economy that benefits its residents.

Billions will flow into the companies of environmentalist donors. The targets, total renewable energy in 5 years, won’t be met. Skyscrapers will continue to be built, and the power plants will remain. The energy that powers the city will still come from oil and gas. But everyone will be obligated to buy renewable credits that have nothing to do with the actual sources of residential and commercial power.

Everyone in New York will get their power from ‘brown energy’ while paying companies in windier and sunnier states for ‘green energy’ that they will never access. And they won’t know any better.

There will be a small useless wind turbine on their roofs and some even more useless solar panels.

And, occasionally, an actual wind turbine will malfunction and take off somebody’s head. For the environment.