Senator Cory Booker has promised to introduce a bill to study a proposal for slavery reparations. The bill will be a companion to a bill by Rep. Sheila Jackson Lee who had once declared on the House floor, “I stand here as a freed slave.” Since Sheila also believed that there are two Vietnams, that the Constitution is 400 years old, and that Neil Armstrong planted a flag on Mars, that may have been metaphor or the addled understanding of a woman who confused Wikileaks and Wikipedia.

Booker, who claims to care about the victims of sexual violence, might have been dissuaded from backing a bill introduced by a politician who was recently forced to resign from chairing the Congressional Black Caucus Foundation after firing a woman who was raped by one of her subordinates.

But Senator Booker has never found a principle that he wouldn’t passionately embrace and betray.

Just to make Booker’s move even dirtier, the reparations bill dated back to Rep. John Conyers, who was forced to resign over allegations of sexual harassment. Senator Booker is pushing a bill originated by a sexual harasser and championed in the House by a politician who retaliated against a rape victim. Instead of distancing his Senate proposal from Lee’s bill, Booker bragged about his dirty alliance.

But if we’re going to launch a commission to study slavery reparations, we should begin with Booker.

“I am descended from slaves and slave owners,” Booker wrote in a campaign biography no one read.

Henry Louis Gates told Booker that his DNA is 45% European and 47% African. Should the privileged son of IBM executives write a check from the 45% of his DNA to the 47% of his DNA?

If Booker is entitled to reparations because a narrow 2% majority of his DNA is African, if 2% of his DNA shifted place, would he have to switch from cashing reparations checks to writing them?

The error rate of DNA tests is usually higher than 2%. Booker’s entire entitlement to championing reparations could be a margin of error. Should we really be dividing people into categories of entitlement and obligation based on a tiny percentage of their genetic code within a margin of error?

Booker is descended, by his own admission, from both slaves and slave owners. He’s the child of IBM corporate executives, and a product of Stanford, Yale and Oxford. Should he really be asking around for reparations because he happens to have 2% more African than European DNA?

The political schizophrenia of Booker’s genes is a perfect metaphor for the national paradox of trying to decide who should be paying reparations to whom in a nation of many different races, many of whom came here after the end of slavery, and of an African-American population that includes the descendants of former slaves and of post-slavery immigrants, all mixed together in one Pluribus Unum.

Asking Americans to pay slavery reparations to each other is as absurd as asking part of Booker’s DNA to write a check to the other part of his DNA. His ancestors of slaves and slave owners might have had debts and obligations, but intermixing has produced a nation that has transcended its history, not only politically, but also culturally and genetically. America 2019 little resembles the South of 1865.

The 2020 field has two major African-American candidates, Senator Cory Booker and Senator Kamala Harris, both of whom are partially black. They follow in the footsteps of Barack Obama who, like Harris, had a non-black mother. The push for Stacey Abrams to jump into a race that already has two successful black candidates, is motivated by the perception of some black activists that she’s more authentic, more representative of African-Americans, than Booker and Harris who are racially and culturally diffused.

The likelihood is that the next black president, like the previous one, will be the product of a complex genetic, political and cultural history rather than Rep. Sheila Jackson Lee’s simplistic narrative of a freed slave. And, like Obama and Booker, he may overcompensate for that complexity by championing simplistic racial narratives, to connect to an African-American electorate insecure about its changing identity, and to play on the guilt of white centrists and the white savior complex of progressives.

“There is not a Black America and a White America and Latino America and Asian America—there’s the United States of America,” Barack Obama had told assembled Democrats in 2004.

But the same politician who appeared to be telling an American story that transcended race was sitting in the pews at Trinity while the Reverend Jeremiah Wright cursed America, hurled racist invective not just at white people in general, but at Italians and Jews among the nationalist preacher’s varied targets.

The worldview of the politician who ran the country for eight years was informed less by his DNC sloganeering about a post-racial society, than by the resentments and racial rage of Jeremiah Wright.

In 2016, Obama dismissed reparations, not so much on moral, as on pragmatic political grounds.

“You can make a theoretical, abstract argument in favor of something like reparations,” he told Ta-Nehisi Coates. “but I’m not so optimistic as to think that you would ever be able to garner a majority of an American Congress.”

Booker is currently less concerned with how reparations will play out on the national stage, than carving out a tribal chunk of the Democrat electorate in an overcrowded field. Like the other 2020 candidates who appear to have endorsed it, he’s really backing some sort of rigged social welfare program that will probably end up benefiting the full roster of minorities that make up the Democrat base.

Calling it slavery reparations is a lie meant to trick black people into voting for the party of slavery.

Like Obama, Booker reinvented his brand, going from a post-racial reformer urging empowerment to the same kind of corrupt racial demagogue victimhood pimp that he ran against in Newark. Which is the real Booker? Like Obama, there is no easy answer. There may never have been a real Booker or a real Obama. Only a politician reinventing himself to tell different audiences what they wanted to hear.

Senator Booker, a product of Oxford, Stanford and Yale, thinks that his audience wants to hear that they can’t compete on their own and deserve even more special treatment because of their race. And that to make progress, we need to tear the country apart to obtain the special privileges his 2% DNA demands.

Sadly, the Yale-educated son of corporate executives is probably right. 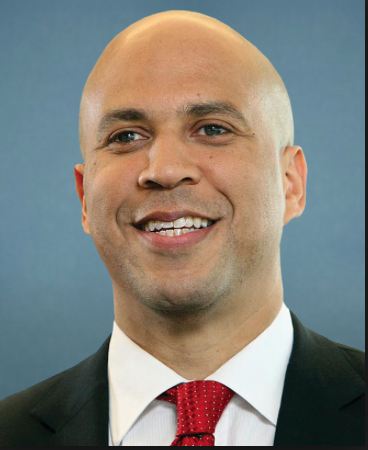 Malcolm X had often echoed the Nation of Islam’s teachings that white people were “blue-eyed devils”. Booker, with his blue eyes, is the sort of politician whom Malcolm might have called a “tricky blue eyed liberal”. He might even be one of those devils whom NOI doctrine teaches were created by an evil Jewish mad scientist who used eugenics to make white people in the hate group’s anti-creation myth.

In 2014, Rep. Conyers was billed as attending a forum on slavery reparations along with Farrakhan. The Nation of Islam leader and the original congressional champion of reparations have a long history. Rep. Sheila Jackson Lee, reparations’ current champion, has her own history with the hate group leader.

Farrakhan is a big fan of reparations. But his idea of reparations is carving a black state out of America. This state will probably be expected to make him king, emperor or caliph with absolute power over all.

Secession is racial separatism taken to its logical extreme. It’s why the Nation of Islam found common ground with the KKK and the American Nazi Party. Reparations offers a more modest separatist vision at a time when racial tribalism is more pervasive and more unworkable in a multicultural country.

Booker, like Obama, is a one-man example of the paradox of multiculturalism leading to tribalism.

The blue-eyed descendant of slave owners, who began mapping his political ambitions at Oxford, is trying to appeal to racial tribalism by invoking the evils of slavery one-hundred and fifty years later. In the diverse 2020 field, Booker is trying to stand out with a tribal appeal to militant black nationalists.

And trying to shamelessly divide us by race with a fake offer of cash for skin color.

If Senator Cory Booker really believes in racial reparations, he should do what Senator Elizabeth Warren did, and take a battery of tests to clarify the exact percentage of his DNA. If his tests show that he is 2% more African than European, the Yale man can cash a reparations check. If, however, his test shows that he has even 1% more European than African DNA, Booker should be the one writing the check.

If Democrats Don’t Scare You, You’re Not Paying Attention