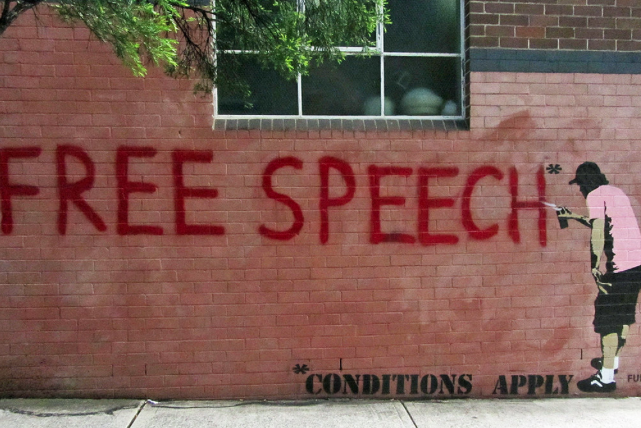 “But, it’s a private company.”

It’s a familiar argument. Bring up the problem of Google, Facebook and Twitter suppressing conservative speech and many conservatives will retort that it’s a free market. The big dot com monopolies created their own companies, didn’t they? And we wouldn’t want government regulation of business.

In a FOX Business editorial, Iain Murray writes that breaking up dot coms like Google would be “a repudiation of conservative principles”. He argues that “Twitter is a private company” and that “there is no positive right to free speech on Twitter or any other private venue.”

“The same goes for the president’s attacks on Google and the complaints of conservative censorship,” Diane Katz writes at the Heritage Institute. “These private enterprises are not obligated to abide any sort of partisan fairness doctrine.”

The talking point that Google, Facebook and Twitter are private companies that can discriminate as they please on their private platforms, and that the First Amendment doesn’t apply, is in the air everywhere.

The driving force behind the censorship of conservatives isn’t a handful of tech tycoons. It’s elected officials. Senator Kamala Harris offered an example of that in a recent speech where she declared that she would “hold social media platforms accountable” if they contained “hate” or “misinformation”.

“Misinformation” is a well-known euphemism among Democrats and the media for conservative political content. It was originally known as “fake news” before President Trump hijacked the term to refer to the media. The recent Poynter list of “unreliable” sites was stacked with conservative sites. Lists like these aren’t hypothetical. Poynter runs the International Fact Checking Network which had been empowered by Facebook and other sites to deplatform conservative content through its ‘fact checks’.

All of this got underway in response to claims by Hillary Clinton and her allies that “fake news” had cost her the election and represented a grave attack on our democracy. The call was quickly taken up by Democrats in the House and the Senate. It’s been commented on supportively by powerful Clinton allies in the tech industry, like Eric Schmidt, the former chairman of Google.

Dot coms like Facebook are cracking down on conservatives as an explicit response to pressure from elected government officials. That’s not the voluntary behavior of private companies. When Facebook deletes conservatives in response to threats of regulatory action from Senate Democrats, its censors are acting as government agents while engaging in viewpoint discrimination.

What’s the difference between that and a totalitarian state?

It might, arguably, be legal for your landlord to kick you out of your house because he doesn’t like the fact that you’re a Republican. But is it legal for him to do so on orders from Senator Kamala Harris?

Defending abusive behavior like that is a desecration of the free market.

The second fact is that the internet is not the work of a handful of aspiring entrepreneurs who built it out of thin air using nothing but their talent, brains and nimble fingers.

The internet was the work of DARPA. That stands for Defense Advanced Research Projects Agency. DARPA is part of the Department of Defense. DARPA had funded the creation of the core technologies that made the internet possible. The origins of the internet go back to DARPA’s Arpanet.

Nor did the story end once the internet had entered every home.

Where did Google come from? “The Anatomy of a Large-Scale Hypertextual Web Search Engine,” the original paper by Sergey Brin and Larry Page, the co-founders of Google, reveals support from the National Science Foundation, DARPA, and even NASA.

Harvard’s computer science department, where Facebook’s Mark Zuckerberg learned to play with the toys that turned him into a billionaire, has also wallowed in DARPA cash. Not to mention funds from a variety of other DOD and Federal science agencies.

Taxpayers sank a fortune into developing a public marketplace where ideas are exchanged, and political advocacy and economic activity takes place. That marketplace doesn’t belong to Google, Amazon or Facebook. And when those monopolies take a stranglehold on the marketplace, squeezing out conservatives from being able to participate, they’re undermining our rights and freedoms.

“A right of free correspondence between citizen and citizen on their joint interests, whether public or private and under whatsoever laws these interests arise (to wit: of the State, of Congress, of France, Spain, or Turkey), is a natural right,” Thomas Jefferson argued.

There should be a high barrier for any company seeking to interfere with the marketplace of ideas in which the right of free correspondence is practiced.

Critics of regulating dot com monopolies have made valid points.

Regulating Google or Facebook as a public utility is dangerous. And their argument that giving government the power to control content on these platforms would backfire is sensible.

Any solution to the problem should not be based on expanding government control.

But there are two answers.

Liberals have abandoned the Public Forum Doctrine, once a popular ACLU theme, while embracing censorship. But if the Doctrine could apply to a shopping mall, it certainly applies to the internet.

In Packingham v. North Carolina, the Supreme Court’s decision found that, “A fundamental principle of the First Amendment is that all persons have access to places where they can speak and listen.”

The Packingham case dealt with government interference, but when monopolies silence conservatives on behalf of government actors, they are fulfilling the same role as an ISP that suspends a customer in response to a law.

When dot com monopolies get so big that being banned from their platforms effectively neutralizes political activity, press activity and political speech, then they’re public forums.

Second, rights are threatened by any sufficiently large organization or entity, not just government. Government has traditionally been the most powerful such organization, but the natural rights that our country was founded on are equally immune to every organization. Governments, as the Declaration of Independence asserts, exist as part of a social contract to secure these rights for its citizens.

Government secures these rights, first and foremost, against itself. (Our system effectively exists to answer the question of who watches the watchers.) But it also secures them against foreign powers, a crisis that the Declaration of Independence was written to meet, and against domestic organizations, criminal or political, whether it’s the Communist Party or ISIS, that seek to rob Americans of their rights.

A country in which freedom of speech effectively did not exist, even though it remained a technical right, would not be America. A government that allowed such a thing would have no right to exist.

Only a government whose citizens enjoy the rights of free men legally justifies is existence.

If a private company took control of all the roads and closed them to conservatives every Election Day, elections would become a mockery and the resulting government would be an illegitimate tyranny.

That’s the crisis that conservatives face with the internet.

Conservatives should beware of blindly enlisting in leftist efforts to take regulatory control of companies like Facebook. The result would be a deeper and more pervasive form of censorship than exists today. But neither should they imagine that the ‘free market side of history’ will automatically fix the problem.

As the internet has devolved from its origins in academia to a set of handheld devices controlled by one of two companies, and then to a set of smart assistants controlled by one of two companies, it has become far less open. Even if Google were to lose its monopoly, Silicon Valley hosts a politicized workforce which allies with the media to compel any rising new company to toe the same line.

And if that fails, there are always House and Senate hearings and harder laws coming out of Europe.

We have an existing useful toolset to draw on, from anti-trust laws to civil rights investigations to the Public Forum Doctrine. This will be a challenging process, but we must remember through it all, that we have a right to freedom of speech on the internet. Our tax dollars, invested over generations, built this system. It does not belong to the Left. Or, for that matter, the Right. It belongs to all of us.

Open Letter to CA Gov. Newson from a Parent Whose Kids Are Leaving the State