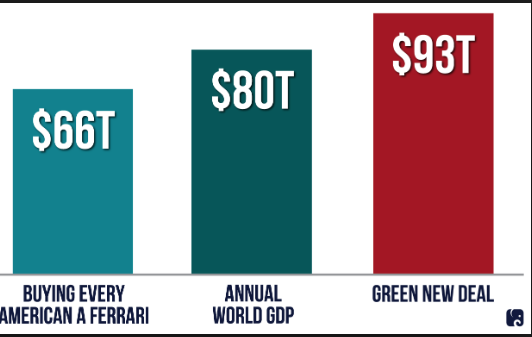 Doesn’t it seem like leftist Democrats speak an entirely different language than you and me?

It was less than two years ago that Trump passed his historic tax reduction, and ever since, Democrats have described the tax cuts as nothing but a gift to the wealthy.

Really?  The Trump tax cuts reduced taxes on almost every American family,.  They contributed to the fast growing economy in decades, and they’ve resulted in the lowest unemployment since the 1960’s.  More blacks, Hispanics, and women have jobs than ever before.  Wages and salaries are rising for the first time in 10 years.  The wealth gap that widened so precipitously under Obama-Biden finally shows signs it’s shrinking.

But all Democrats can talk about is Trump helping the rich.

It’s startling really, how untruthful their argument is, and how completely the mainstream media has promoted it.

But even more startling, is how Democrats have turned 180 degrees to become the advocates of tax breaks for the rich even while they bad-mouth Donald Trump.

Trump’s tax plan put a strict limit of $10,000 on how much taxpayers could deduct for state and local taxes.  So in high tax states like New York, Connecticut, New Jersey, California and Illinois, the rich can’t deduct as much as they used to.

You could be forgiven for thinking if Democrats really cared about making the rich pay their fair share, they’d support Trump’s limit on how much the wealthy could deduct for state and local taxes.

But then Democrats came face to face with economic reality:  when people are penalized by paying high taxes, they move to places with lower taxes. And that’s what wealthy residents have started doing.   New York’s loss is Florida’s gain.

Understandably, Democrat politicians in New York and other high tax states started squealing like stuffed pigs.  But they only have themselves to blame – they’re the reason high tax states deserve the name.

But rather than reduce their taxes to make their states more competitive, the first thing state Democrats tried was re-classifying state and local tax payments as charitable contributions so the rich could fully deduct them.  Predictably, judges laughed such attempts into oblivion.

Then, another reality hit the Democrats.  Their campaign contributions from wealthy donors started falling off. Turns out fat-cat liberal donors aren’t interested in giving up their sweetheart deductions.  They sent word to the liberals, “restore our deductions or say goodbye to our support for Democrat campaigns.”  Oh NO, say it ain’t so!

It was a liberal Democrat, Jess Unruh of California who first exclaimed, “money is the mother’s milk of politics,” and true to form, liberals in Congress are now tripping over one another to do the will of their wealthy donors.

But once more, given the choice between cutting taxes to compete with lower tax states, the Democrats introduced legislation in Congress to restore the state and local tax loopholes the rich used to enjoy.

We’ve always known they were hypocrites, but even I was surprised the speed of their about-face.

But that creates a different problem for Democrats.  Because tax breaks for the rich seriously cross-pressures their very left wing base of small donors.  While their party raises millions from wealthy donors in New York and California, their most liberal candidates raise many millions more from small donations via on-line crowd funding sites.

These contributions come from small donors who hate President Trump and everything he stands for.  And while hate may be an overstatement, they certainly don’t care for the wealthy either.

So for Democrats, the choice between placating their wealthy major donors or energizing their anti-Trump, left wing, smaller, but more plentiful, donors was no choice at all.

Hardly paragons of courage, Democrats chose both. They continue to bad mouth Trump’s tax cuts as gifts for the wealthy while they support their own huge tax loopholes for the very rich.

Even more amazing, they’ve gotten away with it. Neither the leftist base nor their wealthy donors have figured it out.  Or maybe they don’t really care.

How else to explain Democrat advocacy for doubling taxes to pay for things like socialist health care and a Green New Deal, while at the same time cutting taxes on the wealthiest among us?  The duplicity is mind-boggling.  It’s repugnant.

But their political double speak isn’t another language, it’s another world view.  For them, any ends they desire, justifies any means that’s required.

Daniel Greenfield: A Dozen People Were Shot in Buttigieg's City While He Ran for President