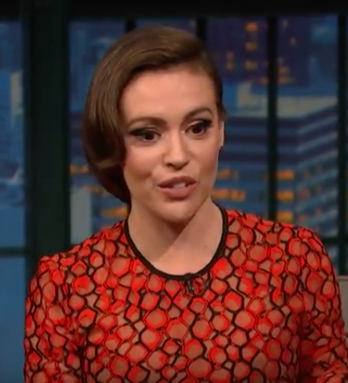 Recently Georgia passed a new pro-life bill called the Living Infants Fairness and Equality (LIFE) Act. It bans abortion after six weeks, the time a baby’s heartbeat can be detected. Now, with a bill that has the words fairness and equality in the title you would think liberals would be happy. But you would be wrong. Because fairness and equality are trumped (no pun intended) where the right to an abortion is concerned.

As you may know, Georgia has become a favored state to make movies due to the tax incentives provided. Wait. You mean the left actually likes lower taxes? You betcha, especially for the rich companies that make and produce these movies. So as you can imagine they are highly upset over this pro-life law. Anything that gets in the way of the radical left’s ability to terminate life in the womb is just not going to be tolerated. Front and center of this is Alyssa Milano who is calling for a “sex” strike for the following reasons:

Our reproductive rights are being erased.

Until women have legal control over our own bodies we just cannot risk pregnancy.

JOIN ME by not having sex until we get bodily autonomy back.

I’m calling for a #SexStrike. Pass it on.

When I first heard this, lyrics from an old song just popped into my head. I couldn’t help it:

“Joy to the world
All the boys and girls
Joy to the fishes in the deep blue sea
Joy to you and me!”

Kidding aside, it’s sad to observe what radical liberalism does to the mind. It completely bends and distorts truth and reality. Notice how her so-called “reproductive rights” apparently overrides the life of the baby in the womb. Not risking pregnancy? Say, what a novel idea. This is only something the pro-life crowd has been saying for decades. It’s called ABSTINENCE! Glad to see Alyssa is finally on board with it.

Legal control over our own bodies? This is rich coming from an ideology that is hell bent on controlling EVERY aspect of everyone else’ lives. And just how much control do you want? Billions of babies have been killed worldwide in the last 40 years. I’d say you already have all the control you need. You’ve killed with impunity. Not even the Nazi’s could have imagined such power in the name of reproductive freedom.

And the focal point of the boycott is this: JOIN ME by not having sex.

Isn’t that an oxymoron? Although it would be wonderful to see liberal Hollywood actually employ some morals.

Milano doubled down and demonstrated more of her intellectual fire-power (or lack thereof) with this:

If Roe is overturned this will be catastrophic for the women most at risk.

Government is never bigger than when it’s in our uteruses.

We must take a stand against the @GOP legislating our bodies. That means you too, men! Fight with us. We need you. #SexStrike

First of all, overturning Roe would not stop abortion. This procedure is a sacrament in the religion of liberalism so it would continue. But it would drastically reduce the numbers making the womb a much safer place. The arrogance and presumption of the left is staggering.

Second, I thought the feminists defined their lives and careers without men. Now they want help? Make up your minds! And btw, I suspect a LOT of liberal men (especially in Hollywood) are not driven by liberal ideology to support these causes, if you get my drift.

So f*** on! Yes! We’ve earned our right to sexual pleasure.

Whoa. Wait just a minute. I thought the point of this boycott was to abstain from sex. And then a statement like that? Call me crazy but I don’t think Alyssa Milano is going to be enforcing this boycott very long.

But even after all this, she doesn’t appear quite ready to actually follow her own advice. Remember, this was/is about Georgia.

Milano remains filming Netflix’s second season of Insatiable in Georgia because she says she is  “currently contractually obligated to be there for another month.”

“But I will do everything in my power to get as many productions as possible – including Insatiable– to move out of this state which continues to put forth oppressive, hurtful policy that contradicts everything the entertainment industry stands for,” she said, reported by CNN. “And if Insatiable doesn’t move to another state, I will not be able to return to the show if we are blessed with a third season.”

Translation: if that mean old state of Georgia doesn’t stop this I am gonna hold my breath and stamp my feet!

On the plus side, at least the producers of the show won’t have to worry about any “hanky panky” on the set from Milano if, and it’s a big IF, she follows through on all of it.

I think the best by-line I saw on this was over at Townhall:

Isn’t that sort of the whole point of the boycott?

Daniel Greenfield: Should Cory Booker Pay Slavery Reparations to Himself?