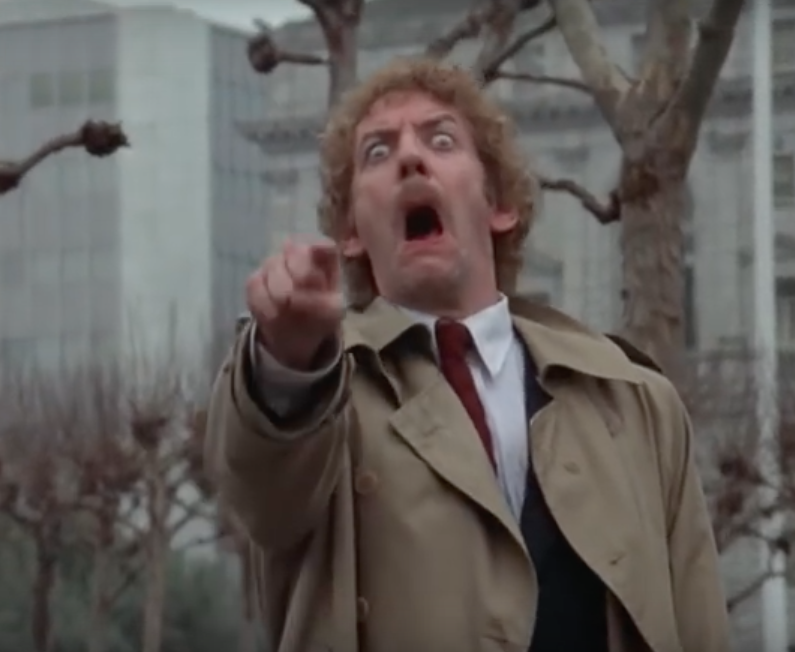 Remember the movie, “Invasion of the Body Snatchers?” In the movie a race of extraterrestrial parasites come to earth and spawn emotionless replicas of human beings. When replicants happen on a human not yet converted, they emit a high-pitched scream to signal their discovery.

It’s exactly the same with the progressive leaders of the Democrat Party today. But instead of a single jarring screech, their screams take on the form of accusation. At the first sign of disagreement, today’s woke leftists screech “racist!”

Now I’m not saying racism doesn’t exist. It certainly does and when we see it we are all morally and duty bound to denounce it for what it is.

But racism has nothing to do with why conservatives fault leftist policies and goals. Sadly, the left today simply can’t see that. If you disagree with them, then you must be motivated by hate. Cruelty and brutality must be your goal. Disagreement of any kind confirms your immorality.

The most recent example is the immigration fiasco. Here’s what’s happening. Trump is concerned that in the first three months of the year, more than 100,000 illegal migrants were released into the American population. Immigration authorities suggest the number will be even bigger during the single month of April.

A number of complex causes intersect to produce this dire circumstance: hundreds of thousands of people on the southern border claiming asylum, a complete lack of space in which to hold them while their claims are being adjudicated, and judges who order the release of migrants within 20 days of detention.

Trump has indicated he’d like to figure out how to address the illegal immigrant process without releasing hundreds of thousands of undocumented migrants into the U.S. population. He’s appointed hard-liner Stephen Miller to develop a policy that does so.

Naturally, the left lost not one second labeling Miller deplorable. Newly elected Muslim Congresswoman, Ilhan Omar, called Miller a “white nationalist.” New York magazine said he was a xenophobe and a racist. Morgan Freeman tweeted that Miller is the “reincarnation of Hitler” who is trying to “preserve some BS pure white blood line.”

The attack on Miller is the latest symptom of a disease the left can’t spread fast enough. When you come up against someone who disagrees, bully with name-calling … racist, homophobe, nationalist, or sexist.

These are the magical words echoed throughout the Halls of Congress, the news rooms of our media outlets, the lecture halls of colleges, and the homes of Hollywood’s biggest celebrities and want-to-be-celebrities.

Rather than civil engagement and honest debate on the merits of any given subject, the left has only one response to any variance from the mothership’s thought-control center — insult, induce fear, and label opponents as evil and immoral.

Certainly at this point, you’ll find that just about anything Donald Trump or his Administration proposes will be met with cries of racism, homophobia, nationalism, or sexism.

Alexandria Ocasio-Cortez and her two Muslim colleagues in Congress are only the most vocal and outrageous. Others tend to be more subtle.

Cooper Anderson talks about Trump defying the “rule-of-law,” without ever mentioning that Obama’s executive orders were overturned by courts far more often than Trump’s.

Don Lemon claimed Trump was connected to the college admissions scam because the president was “part of a rigged system that favors the elite.”

CNN’s reporters aren’t alone. MSNBC, The Washington Post and the rest of the media elite in this country all agree. Donald Trump is evil, he’s motivated by hatred, and his goal is inflicting cruelty.

Their evidence? Simple. He disagrees with them on the issues of immigration, taxes, the economy, and healthcare. Fair enough. Point proven. Case closed.

Look, you can disagree with President Trump, but you can’t impute to him the motive of hatred simply because he wants a system that adequately vets those who seek entry into our country. Or because he wants to protect America’s people and economy from an invasion of migrants our society can’t accommodate.

Believe what you like about Trump on race, but you can’t deny Trump’s companies have hired thousands of minorities, raised them to responsible positions, and paid them wages and salaries equal to any of his white employees and executives.

You can take issue with his economic and tax policies, but you can’t deny that more minorities, women, and LGBTQ+ individuals are working than ever before. Or that paychecks are beginning to show signs of growth for the first time in a decade and a half.

Here’s the truth the left doesn’t want you to know. Trump has more compassion for the suffering people of Central America, Mexico, and Venezuela than a large boatload of “woke” leftists. How can I know that with certainty? Because compassion alone isn’t a solution, but it should lead to common efforts by all parties to find solutions.

It hasn’t, and not because Donald Trump hasn’t tried. Despite their cries of racism and white nationalism, it is Democrats who refuse to take up immigration reform in any sensible way. It is Democrats who refuse to provide the resources required to help those poor people on our southern border. No new facilities. No laws to better guide judicial decrees. No resolution even to the Dreamer issue they claim they care so deeply about.

The putrid fact of the matter is that the left relishes a humanitarian crisis they can blame on President Trump in time for the 2020 elections.

Their hypocrisy is deeply offensive.

Like the extraterrestrial parasites in “The Invasion of the Body Snatchers,” their sole concern is gaining control no matter who they must hurt, how callous they must behave, or how much devastation they must cause.

And be forewarned, if you refuse their efforts to convert, you too can expect to be accused of racism and worse.

Palm Sunday: God as a Gardener