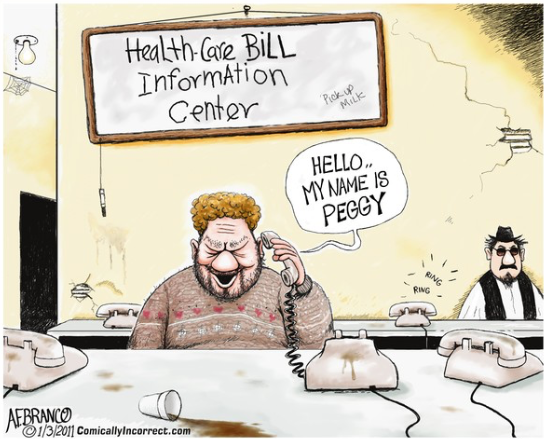 There’s a joke going around that goes like this, “Have you heard about the American who went to Canada for a hip replacement? Neither have I.”

But Canadian-style health care is exactly what the Democrats who support Medicare-For-All want for America.  And that isn’t funny.  In fact, it’s deadly serious.

Medicare-For-All isn’t real.  It’s just a non-sense slogan intended to spin a catastrophic idea into something that sounds benign, even desirable.  The truth is that Medicare-For-All is really Joseph Stalin with a warm smile and glad hand.

Just about any doctor will tell you that current Medicare only works because private, non-Medicare, patients pay for it. Private patients get charged more to cover the difference between actual costs and Medicare’s reimbursement rate.

In fact, a third of doctors no longer accept new Medicare patients because they’re too embarrassed, or too honest, to pass Medicare short-falls along to their paying clients.

According to a  recent survey of U.S. hospitals, Medicare/Medicaid reimbursement fell short of actual hospital costs by $57.8 billion.  And that doesn’t count doctors, technicians, physical therapists, medicine, or any other aspect of healthcare outside the hospital.

I have personally seen bills for medical treatments that run into the thousands of dollars for which Medicare pays less than $100.

Why, you may ask, does any of that matter to me, the patient?  The answer is that reimbursements that fall below costs means far fewer doctors.  And no more private markets mean far less quality care.

Today, 16 of the top-paying 20 occupations in America are directly involved with health care — doctors, nurses, anesthesiologists, surgeons — you get the picture.  But all that’s history with Medicare-For-All.  Young people who might be interested in pursuing a career in medicine will stampede for the exists.  Why spend 8 years or more to become an MD when you can make a lot more money in half the time and expense becoming an engineer, computer technician, lawyer, or financial manager?

With government health care, fewer doctors and under-funded facilities are inevitable; and everywhere it exists it means a longer, more painful, and sometimes even deadly wait for treatment.

But even with low reimbursement rates, Medicare-For-All will be expensive.  Most estimates peg it at more than $2.5 trillion per year – nearly two-thirds of our current federal budget!  Some experts estimate annual costs will be more like $3 trillion or even $3.5 trillion — about $10,000 for every man, woman, and child in the country.

Really, the only way to keep costs from bankrupting a country with government health care is to put government employees in charge of deciding who can and cannot get treatment.

Too old?  No cancer surgery for you!  But thanks for playing The Medicare-For-All game.

Already had that knee replaced and the surgeon screwed up?   Sorry, only one knee per person this year.  Blame it on the Medicare-For-All game.

Visited the emergency room 3 months ago? Sorry you cut your finger off, but you don’t get another visit till next quarter, see you then.

That’s the Medicare-For-All game.  Some people win, but losing is for keeps.

And with government run health care, you have no choice unless you’re so rich you can go to a private doctor. Good luck with that.

The simple fact is that wherever nationalized health care has been implemented, rationing has followed. Those who say otherwise are lying to you just as Obama lied to you about being able to keep your insurance plan and your doctor.

Do the math. Half the doctors, half the hospitals, and half the equipment, but the same number of Americans all forced into playing the Medicare-For-All game.   In other words, half the supply, but all the demand.  On top of that, ladle on a huge government bureaucracy to oversee and administer the program.  Of course quality will fall, wait-times will increase, and costs will skyrocket.  It’s Econ 101.  In fact, $3.5 billion annually may look like wishful thinking by the time the first band aid is administered.

So why in the world is the left so obsessed with government-run health care?  My worry is that once we’re all playing the Medicare-For-All game, they have the power to decide who gets health care and who doesn’t.  That is indeed absolute power.

With that kind of power, it’d be pretty easy for them to just say to those who refuse to tow their line, “Thanks for playing the Medicare-For-All game.  Now, shut up and die.”