It seems liberals will never learn. President Trump says or tweets something and they react by screaming and throwing ashes on their head.

Recently it was reported that the Trump administration had considered sending the illegal migrants crossing our borders to Sanctuary Cities. Trump confirmed this in a tweet:

Due to the fact that Democrats are unwilling to change our very dangerous immigration laws, we are indeed, as reported, giving strong considerations to placing Illegal Immigrants in Sanctuary Cities only…The Radical Left always seems to have an Open Borders, Open Arms policy – so this should make them very happy!

The reaction from the left was predictable and swift. They were NOT happy!

“I say he’s trying to pit Americans against each other and make us less safe. He is injecting fear into our country. If he was looking to solve a problem, he wouldn’t be doing things to divide this country against itself. Beware of anybody that’s trying to tell you to be afraid in the strongest country in the world, as opposed to showing our strength and our courage by pulling people together to find common sense solutions to solve this problem.”

How is what Trump doing injecting fear and dividing people? I though illegals were helpful to our country. That’s what people like Booker have been telling us for years. Didn’t they you want those people in their city?

“Well, he’s confused Twitter with reality, that you can do a Twitter prank and own the libs and forget the fact there are real human beings at stake here. … We could do a lot of things to make the situation on the border functioning. And that’s what a normal president would be focused on. That’s what a governor would be doing. That’s what a mayor is doing. Instead of doing actual policy, he’s just doing — he’s treating it all as a Twitter game to make his base feel good about themselves.”

This is hilarious! First of all Trump is owning the libs because those guys are reacting to it the same way they do with everything else Trump says or does. Second, Trump has tried to do things to fix the border and the left refuses to compromise at all so their comments are ridiculous and ill-informed. Third, who has been using Twitter for 2 years to perpetuate the Russian collusion narrative to keep their base angered up? It’s not Trump. David Brooks lives in a fantasy world. Or he is just being a good little puppet.

“This is an outrageous abuse of power and public resources. The idea that the administration thought in any way that it would be acceptable to use families and children, human beings as political retribution against their enemies, should infuriate every American regardless of political affiliation. And I am proud to be the mayor of a sanctuary city. We believe sanctuary cities are safer cities. The data is very clear that immigrants — and even undocumented immigrants — commit far fewer crimes than non-immigrants. The data is clear. Sanctuary cities like Oakland are actually getting safer. Uh, we believe that there is safety and harmony in diversity and inclusion. But what’s really outrageous is the way that this administration continues to use petty politics and really just vitriolic rhetoric to advance a racist agenda. This is not American.”

Not American? For two years they have been telling us that border security is NOT American. It is so funny to watch these folks try and bend reality into pretzels.

“The left really couldn’t be clearer on this question. All immigration is good. More immigration is better. There is no distinction between legal and illegal varieties of immigration. If you disagree with this you are a white nationalist. That’s what they’ve said almost every day for the past two years. We’ve watched carefully and so have you. Now, here, completely out of the blue comes the man they despise most in the world, Donald J. Trump, offering them the one thing they want more than anything, more immigrants, immediately, delivered right to their door at federal expense. Well, it must have been like Christmas morning. You think you’re getting another pair of socks and there it is, a pony, tethered to your mailbox, holy smokes, amazing, best day of your life. That’s not how they responded.

Almost simultaneously, as if in concert, both CNN and MSNBC ran headlines accusing the White House of dumping immigrants into cities. What’s the message the left is sending us, that immigrants are trash? Something you drop off as a cruel prank like a flaming bag of dog waste? If you wanted to defile someone’s city, you “dump” immigrants on it? Whoa, that sounds a little, searching for the word here, racist, a lot racist actually.

But Nancy Pelosi agrees with it, in fact. She lives in one of these cities that might be “dumped” on. So she immediately issued a statement, quote, “the extent of this administration’s cynicism and cruelty cannot be overstated. Using human beings, including little children, as pawns in their warped game to perpetuate fear and demonize immigrants is despicable.”

A classic case of the left accusing others of exactly what they have done. They are the ones using kids as pawns by accusing Trump of initiating the separation of children from their parents when it started under Obama. It is a bold faced lie.

“Wait for a second, this is getting really confusing, it doesn’t seem to make sense. How can the presence of immigrants, quote, “perpetuate fear”? Immigrants aren’t dangerous, they told us that a thousand times, they’re safer than you are. They’re amazing, much more amazing than you are. Pelosi says that a lot. Why is it bad that Trump wants to send more immigrants to San Francisco. San Francisco is a sanctuary city, it’s subverted federal law in the hope that more illegal immigrants would come there.”

Didn’t Pelosi state that illegals have a “spark of divinity”? Why wouldn’t it be “divine” to let them into your city?

“Nobody hates diversity more than rich liberals. The very people pushing it. Let’s hope immigrants are watching this on TV and drawing their own conclusions. The left can say they love you, but if they don’t want you in their neighborhood, going to school with their kids, they’re lying.”

The bottom line is this: President Trump knows exactly what he is doing here. This is simply a brilliant political tactic to expose the left as the blatant hypocrites they are. And it’s working beautifully. This has been the main story over the weekend and is focusing attention on this issue again, one that is not a winner for the left despite how much they try to convince themselves that it is (just like they thought on DACA).

They know allowing illegals into the country en mass is not safe. But since they themselves live behind fortified walls in their safe little enclaves, they don’t have to deal with the reality of it. 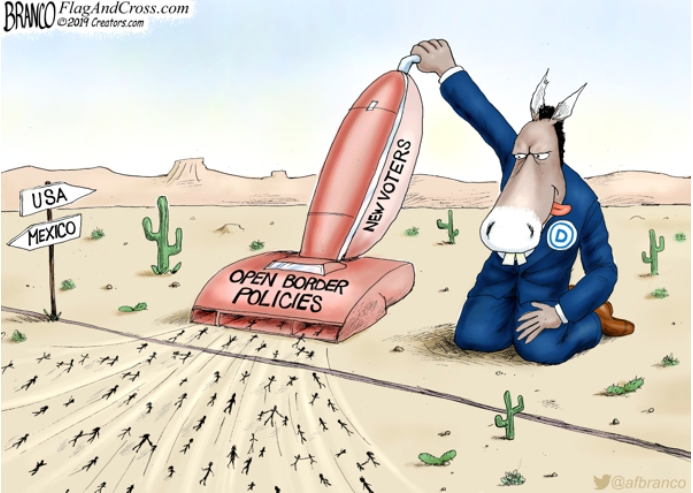 They see potential voters in the illegals. The rest of us be damned.

In fact, the Democrats aggressively opposed illegal immigration until a few years ago. This is what Bill Clinton had to say on it in 1995: “All Americans, not only in the states most heavily affected but in every place in this country, are rightly disturbed by the large numbers of illegals aliens entering our country. The jobs they hold might otherwise be held by U.S. citizens or immigrants. The public services they use impose burdens on our taxpayers.”

And here is what then Senator Barrack Obama said in 2006: “Those who enter our country illegally, and those who employ them, disrespect the rule of law. And because we live in an age where terrorists are challenging our borders, we simply cannot allow people to pour into the United States undetected, undocumented, and unchecked. Americans are right to demand better border security and better enforcement of the immigration laws.”

That viewpoint changed when they figured out the potential of a huge voting base from the illegals. Do you think for one second they wouldn’t reverse course again if those votes started going to Republicans?  We all know the answer to that.

This tactic also exposes the fact that most Sanctuary Cities are run by Democrats. If they were in “red” cities, there would be no uproar. In fact the Democrats would probably provide transportation for them!

After heavy criticism from the left, Pres. Trump doubled-down:

Update: The Oakland Mayor is now saying they would welcome all immigrants. Looks like Pres. Trump has the first destination. He should sent them there immediately.

Omar Hides 9/11 and Lies About CAIR