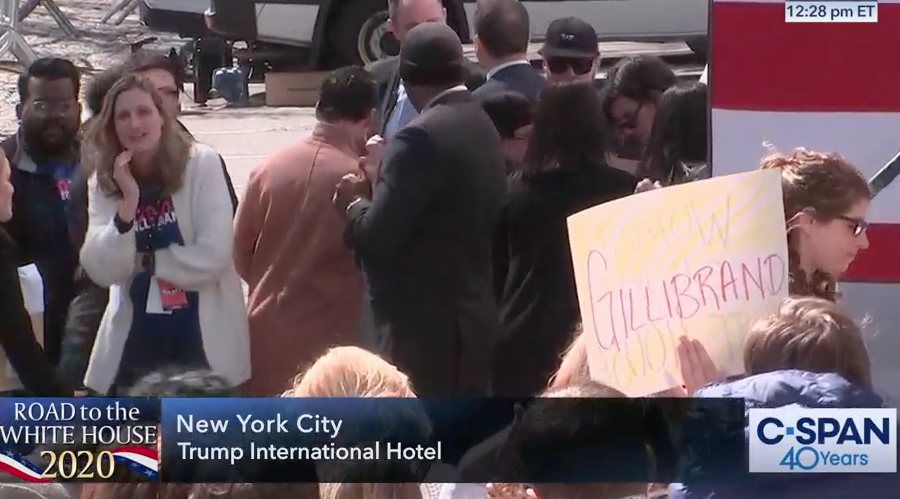 Senator Kirsten Gillibrand was going to launch her kickoff rally right in front of President Trump’s front door. “No other candidate has done something like this,” she bragged. “We’re rallying at Trump’s doorstep to send a message loud and clear: We’re together, we’re brave.”

By the time she showed up in front of “Trump’s doorstep” at the Trump International Hotel off Manhattan’s Central Park, the President of the United States was traveling back from Florida to Washington D.C. He was nowhere near the hotel where Gillibrand had decided to “confront” him.

There was nothing “brave” about venturing into the Upper West Side, where the locals would rather commit ritual suicide with a spork or shop at Walmart, before voting for Trump. Starting your rally in a place where Hillary Clinton won 80% of the vote isn’t brave. It’s cowardly. Gillibrand would have shown more courage by going back to her old district where Hillary only won 54% of the vote.

But instead her campaign threw up a giant American flag and then brought out two illegal aliens.

It was a balmy spring day in the Big Apple with sunshine and a high of 60. The NYPD, out in force, had roped off blocks to accommodate the crowds of the brave expected to turn out on Trump’s doorstep.

The actual audience barely filled half a block according to photojournalist Pamela Hall. The Washington Times estimated that the turnout amounted to 1,000 people. The New York Times offered no estimates, but conceded that the crowd was “small”. It was so small that most of the media coverage consisted of close-up photos to avoid exposing just how few people had bravely showed up to the 2020 kickoff rally.

You can find more people than that on a Sunday in Manhattan waiting at a trendy coffee place.

Out of desperation, the New York Times led its coverage with a painfully close-up shot of a secret service man looking up at Gillibrand’s swollen ankles with a yellow moving truck in the background.

This wasn’t a small town in Iowa or New Hampshire where failing presidential candidates can find themselves speaking to two dozen people. It was Manhattan on Sunday afternoon. A few hundred feet away, joggers were running up and down, tourists were gawking at the sights, including Trump’s hotel, families were strolling through Central Park on one of the first warm days of spring after a cold winter.

None of them wanted to come and hear the senator from New York speak in her own state.

“When we tell Trump enough is enough, I want him to hear your voice along with mine,” Gillibrand had pleaded.

Not only wasn’t Trump there. No one else was there either.

Either the millennial yuppie hipsters clotting the Upper West Side were scared of Trump or they weren’t very interested in Gillibrand. Since she occasionally polls at zero, the possibility is real.

The kickoff rally reminded everyone of why she polls at zero.

Despite her recent sexual harassment scandal, the campaign tried to pivot back to the #MeToo movement. Out came Andrea Pino, the star of the Weinstein Company’s propaganda doc, The Hunting Ground. Pino insisted that, “Kirsten Gillibrand has fought for women” and for rape victims.

Meanwhile, Senator Gillibrand had just been forced to fire her close personal friend, driver and adviser, Abbas Malik, after multiple sexual harassment incidents in her office, which it covered up.

Getting back on her #MeToo high horse was a bad idea. But so was resurrecting The Hunting Ground.

The Hunting Ground had been heavily promoted by Harvey Weinstein, a serial rapist, and its claims have been widely discredited. Appropriately enough, Gillibrand had appeared in The Hunting Ground.

Harvey exploited the pre-#MeToo movement for virtue signaling while raping women, why shouldn’t Senator Gillibrand be able to cover her office’s complicity in sexual harassment the same way?

Pino preached that Gillibrand is, “for every American that dares to imagine an America that serves all of us — not just the white, rich and the powerful.” Rich, white and powerful would describe Gillibrand.

After the illegal aliens and the stars of a Harvey Weinstein campus rape documentary, the Gillibrand campaign brought out the star power. Connie Britton, an actress you may not remember from Spin City, assured the crowd that Gillibrand would help them the way she had helped her adopt an African baby.

The caption identified her as “Actress and Activist”.

Britton was always a bad actress, but she had never been worse than when she claimed that Gillibrand can harness “the power of the storm” and that the bravery of a politician who has flip-flopped on every major issue in her career “comes from her unwavering core of integrity”.

The writing on Spin City was never this bad.

Then, while the music played, “Hair toss, Check my nails, Baby how you feelin’?, Feeling good as hell”, the prom queen with no one at her prom, sauntered up to the stage.

The song cut off right before, “If he don’t love you anymore.”

Some candidates struggle to find a song that sums up their campaign. Kirsten’s was the radio edit version of a song that was popular three years ago with all the obscenities taken out. Senator Gillibrand might not have gotten anything else right. But that does sum up her campaign.

Senator Gillibrand thanked Connie Britton for being a friend and an incredible actress, and in her best prom queen voice, thanked “everyone who has gathered here today.”

Everyone being the population of a Manhattan coffee shop.

While flippantly pushing back strands of her coifed hair, Senator Gillibrand informed the crowd that the Constitution was always meant to “grow” and “adapt” in the tone of a teenage girl giving a class report.

“Even the Star-Spangled Banner ends in a question,” she insisted.

It actually ends with an assertion. Senator Gillibrand is running for the highest office in the land while being unfamiliar with the full version of the country’s national anthem.

What do you do when you launch a presidential campaign and there are more reporters, interns, and activists than actual voters? Since it’s the 2020 race, you scream even more loudly against Trump.

“He puts his name in bold on every building,” Gillibrand babbled, looking back and forth at her two teleprompters. “He does all of this because he wants you to believe he is strong. He is not. Our president is a coward.”

Gillibrand wouldn’t be the first member of Congress desperately taunting Trump in the hopes that he would notice her and give her some credibility. But sadly, Trump didn’t so much as diss her on Twitter.

The rant escalated. The hotel was a “a shrine to greed, division, and vanity”. Unable to taunt Trump, the senator from New York was reduced to taunting an inanimate object. She told the small gathering that, “the greater strength by far, is ours” even though the evidence made it all too clear that she was wrong.

Gillibrand rambled on about the Mueller report, threw in Nixon and JFK references for the kids, and proposed socialized medicine, universal pre-K, and the Green New Deal. “We should aspire to net zero carbon emissions in the next ten years,” she proposed.

If she wants net carbon emissions in the next ten years, she can start by turning off the power to New York City. The mass deaths would be the only realistic way to get to carbon neutrality in a decade.

But, like most politicians, Senator Gillibrand doesn’t understand what she’s proposing and doesn’t care.

The theme of her rally and campaign was “brave”. And she wants to be brave by proposing the same stuff that everyone else in the 2020 field is, while shouting that Trump, who is far away, is a coward.

And she was doing it to an audience that hadn’t even bothered to show up.

The New York Times interviewed one of her former interns who dissed her rally and turnout. Not only couldn’t Gillibrand get her supporters to turn out, even her interns were looking down at her.

But not all the attendees at the Gillibrand rally lacked passion.

A number of Jewish protesters had shown up, furious at her appearance at the anti-Semitic Women’s March, her refusal to oppose BDS, and her other betrayals of the Jewish community.

“Why don’t you support Trump,” the woman holding up the “Trump 2020” banner asked a Jewish liberal. “He’s done a lot for this country. And he loves Israel and the Jewish people.”

“She’s in favor of Boycott, Divestment, Sanctions of Israel, that makes her an anti-Semite,” a protester told a reporter.

Senator Kirsten Gillibrand had not only failed to get a crowd to come out to her kickoff rally, but she had managed to attract Jewish protesters in the most Jewish city in America.

This wasn’t a kickoff rally. It was a humiliating disaster.

“Will we be brave?” Gillibrand asked the crowd. “You answered that question just by being here.”

Showing up to a rally on a Sunday afternoon to cheer her on was the epitome of bravery.

“Years from now we will look back at this moment,” Gillibrand emoted, in the voice of the prom queen telling all the less popular kids how much their praise means to her.

Then, as her husband and children got up on stage, she awkwardly gyrated and left to the sounds of, “Cause he don’t love you anymore/So walk yourself right out the door.”

Once again, she had perfectly summed up her campaign with a song.

Omar Hides 9/11 and Lies About CAIR

Daniel Greenfield: Money in the Toilet