In early April, a man was arrested after making a threatening phone call to Rep. Ilhan Omar’s office. Also, around that same time, a woman was arrested for sending a white powder to Senator Susan Collins’ office. The Collins letter claimed that it was coated in ricin and declared, “Good luck to you Susan, in the next life.” Another letter implied that it had a fatal dose of anthrax inside. 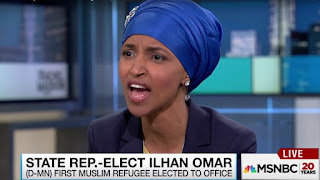 After the senator’s husband opened the letter, hazmat teams went to the house. Her husband and the dog, a lab named Pepper, had to be quarantined. A screening system was set up at the local post office where employees also feared being exposed to hazardous materials. The attacker is allegedly a member of the leftist Green Party who was angry about the senator’s vote to confirm Justice Kavanaugh.

The same media outlets that have behaved as if Rep. Omar might be killed at any moment because she received a threatening phone call have showed very little interest in a potential anthrax or ricin attack on a senator. And the media, which helped whip up the hysteria over Kavanaugh and Collins, has accused President Trump of incitement for merely quoting Omar’s hateful words about 9/11.

Two staffers working for Senator Ted Cruz were hospitalized after a package with a white powder was sent to his office in the fall of 2018. Around that same time, traces of ricin were detected on an envelope sent to the White House and addressed to President Trump. The media showed less interest in an attempt to assassinate the President of the United States than in a threatening call to Omar’s office.

Speaker Pelosi urgently claimed that she had worked “to ensure that Capitol Police are conducting a security assessment to safeguard Congresswoman Omar, her family and her staff.” Where was Pelosi’s concern when Republican House members were being threatened and physically assaulted.

Despite Pelosi and the media’s implications, threatening calls to members of the House are routine.

They’re usually ignored because they keep happening to Republicans.

By the summer of 2018, there had been over 1,600 threats against members of congress. In 2017, there were around 2,000. That August, two people were arrested for death threats against 3 Republican House members, including Rep. Steve Scalise, who had already been shot by a Bernie Sanders supporter.

The threats were not just made against Scalise, but even against his children.

Somehow a death threat against a House member who had nearly been killed once was less newsworthy than the incredible victimhood of Rep. Omar’s office merely receiving death threats.

If we do the socialist thing and divide 2,000 threats among 435 House members, each honorable representative would be entitled to 3 or 4 individual threats. It would be much more newsworthy if Rep. Omar, especially considering her toxic habit of saying foul things about Jews and America, somehow weren’t receiving death threats. The media broadcasting the commonplace fact as if it were the biggest story of the year isn’t reporting, it’s an attempt to spin the threats to make Rep. Omar into the victim.

In the fall of 2018, Rep. Andy Harris was assaulted in his own office by protesters. Rep. David Kustoff was nearly run off the road the year before. But the media acts as if mere threats, a few among thousands, to Rep. Ilhan Omar, are more newsworthy than actual physical assaults on Republican congressmen.

Protests at then Rep. Dana Rohrabacher’s office even injured a 71-year-old female staffer.

Are the threats against Rep. Omar more newsworthy than the threats to kill Rep. Tom Garrett’s wife, his daughters and even his dog?

No, but they are more politically useful.

By dwelling on the threats, Democrats don’t have to defend Rep. Omar’s hateful comments about America and Jews. Instead they can accuse her critics, including President Trump, of inciting violence.

But if President Trump criticizing Rep. Omar incites violence, aren’t Trump’s many media critics guilty of inciting violence against him and against House Republicans? The Huffington Post ran a piece calling for the execution of Trump. A senior Newsweek writer had tweeted of Republicans, “It should be their loved ones who die.” “If the shooter has a serious health condition then is taking potshots at the GOP house leadership considered self-defense?” wondered a regular at the New Republic and the Washington Post.

Even as the media was choking on its outrage over Trump’s implied criticism of Rep. Omar, the Boston Globe was trying to explain why it ran a piece encouraging waiters to taint the food of Trump officials.

This is the sort of misbehavior that even major media outlets traffic in even while they white knight for Rep. Omar, acting as if the vile bigot is a damsel in distress who needs to be rescued from Republicans.

Speaker Pelosi showed more concern over threats to Rep. Omar’s office then she has over any of the threats and even violent assaults inflicted on her Republican peers and colleagues.

Even when those threats have come from inside her “House”.

In the fall of last year, an intern for Rep. Sheila Jackson Lee, a member of her party, doxed 5 Republican senators during the Kavanaugh hearings, posting their home addresses and home phone numbers online. The intern, Jackson Cosko, comes from a connected family and his mother had posed with Pelosi.

There is no sign that Pelosi ever condemned his actions or expressed concern about the senators.

Speaker Pelosi’s histrionics over Rep. Omar’s safety are a shameful exercise in cynical hypocrisy. Her party and its associates have been instrumental in violating the security of Republican elected officials, in the House and the Senate, so that they could be confronted and threatened. The organizations behind that harassment often intersected with the funding sources of her political movement.

The media’s pearl clutching is even more pathetic when it can hardly interrupt its own calls for the harassment of Republicans to pretend that any criticism of Rep. Omar is certain to lead to violence. After falsely claiming that President Trump was a Russian spy, that Justice Kavanaugh is a serial rapist, and that anyone who supports Trump is fair game for anything from harassment to execution, the media has as much moral authority on incitement to violence as Charles Manson and Jim Jones.

The only reason the media is emphasizing the death threats against Rep. Omar is because her rhetoric is too repulsive to defend by any conventional means. The media is trying to change the subject and smear Omar’s opponents because it’s too cowardly to make the case for anti-Americanism and anti-Semitism.

Being the recipient of death threats does not make you a good person. It doesn’t mean that you’re in the right. Rep. Omar has received death threats. As have Nazi, Communist, KKK and Black Lives Matter leaders. Being a public figure means that you will receive death threats. Using them to hide from a reckoning for your rhetoric is a political stunt worthy only of an institution as discredited as the media.

And, when it comes to threats of violence, and of their actual implementation, the facts are clear.

Republican elected officials have suffered disproportionately from harassment and threats of violence. The only House members to be physically assaulted in the last few years have been Republicans.

When the media and Pelosi ignore those facts, they are declaring that Republican lives don’t matter. And that Rep. Omar’s feelings are more important than the feelings and safety of House and Senate Republicans. And, like Omar’s hateful comments, that attitude is un-American and deeply wrong.

The Deliberate Cruelty of a Not So Good Friday