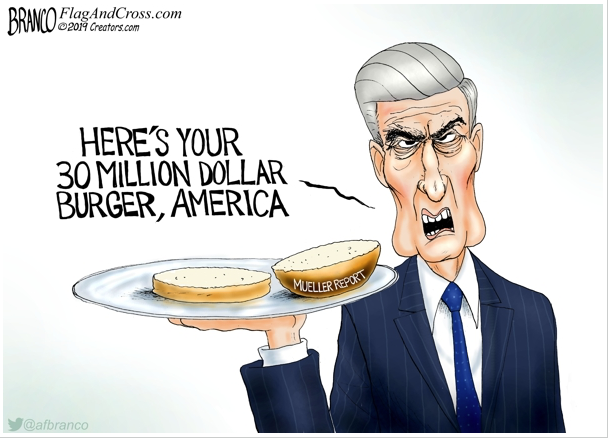 “America, where are you now?

Don’t you care about your sons and daughters?

Don’t you know we need you now

We can’t fight alone against the Monster”-John Kay, “Monster”

On a recent visit to a fast food restaurant (which shall remain nameless here) I ordered their version of two bacon cheeseburgers. The buns were perfect, the condiments fresh, the bacon was crispy and the cheese was nicely melted.

There was only one thing missing: there was no beef.

That is exactly what is missing from the Mueller report. Unlike the restaurant, where they remade the burgers, there is to be no remaking of Mueller’s report. Despite the droning efforts of political hacks, like Representative Adam Schiff, you cannot create a crime where there is not one. You cannot create collusion when it collides with the Constitution. There is no obstruction, only obfuscation by the sound bite fury of the Democrat Party and the silent “What, me worry?” Republican Party.

As an American citizen, I would like to see the Mueller report released to the public. At the very least, a pertinent summary. Hell, why not? My tax dollars helped to pay for this unwieldy document. I will even make a deal, a summary of the report and a reasonable rebate check. In addition, please do the same for my fellow citizens. I would like some information, and maybe some answers, for some of the questions I have regarding the Mueller report. The primary question being the following:

Was the Obama Administration responsible for creating the “Russian dossier” that perpetuated this farce? Partial answer: More than likely, yes. They were so intent on electing Hillary Clinton and continuing the failed set of policies instituted by Barack Obama that they were willing to lie to and cheat the American people.

So no thank you, an apology is a waste of my time and attention.

While Lady Justice may be blind, her sister, Accountability, has unfettered vision. I want accountability for the abuses of the FISA process. The previous administration’s abuse of power may be unmatched in the history of America and that may need an investigation.

Just don’t charge the American people $30 million dollars for the right to do so. We have been vastly over billed too many times.

Many actively involved public officials, like Congressman Adam Schiff, may need to resign.

Many former public officials may need to be investigated, be tried under due process and possibly prosecuted.

As a child, I felt feelings of sympathy when the Frankenstein monster was chased by torch bearing villagers in the classic Universal films. As an American citizen, I feel no sympathy for the monster that is our shadow government.

Time to raise the torch.

Daniel Greenfield: In the Coffee Shop at the End of the World with Beto O'Rourke