When the Founding Fathers of this nation were crafting the Bill of Rights and the Constitution, they made sure that the First Amendment was in fact first because it was the most important. It was the one thing that all other rights and freedoms come from. The freedom to say what you think, no matter what anyone else thinks, and the right to believe what you wish, no matter what anyone else thinks. It is the very cornerstone of the founding of America.

For the past fifty years or so, the topic of free speech has been largely untouched. America had a press that, for the most part, gave us one viewpoint about any given issue, and there was really no where else to go to hear another side. And honestly, it did not occur to us that there might be another side. What we heard was coming from trusted news and media sources. We had no reason not to believe them. Most people operated on the premise that the place to hear differing viewpoints and debate were college campuses. Maybe, what ever might have been going on there was not a problem back in the day when Ward and June dropped the Beaver off at State U.

What a difference fifty years makes. The modern-day mainstream media is nothing more than the propaganda arm of the Democrat Party. There is a specific agenda. The people who work for media outlets know unquestionably that they are to follow that agenda or don’t work. They will deny that this is the case. Every now and then one of them will give a half-hearted defense of their “hard news gathering” practices. But every year, they feel less and less like they need to hide it.

On the surface, one might think that this really is about journalistic practices but it is not. It is about power, nothing but power. And when a group of people thinks that their power is on the line, they will do what they need to do, destroy who ever they need to in order to keep that power, to keep the environment they have created going. So, when something comes along that challenges that power, that status quo, it must be crushed, by any means necessary. 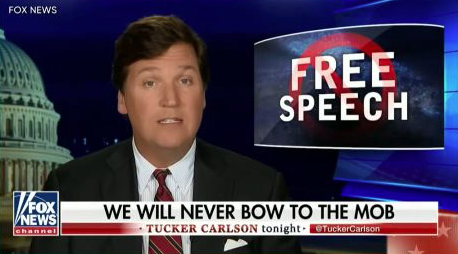 The latest target of the Left’s war on free speech is Fox News Channel Host Tucker Carlson. Liberal “watchdog” group Media Matters recently released tapes of Carlson on a shock jock radio show from years ago. The point here is not what Tucker Carlson said. You can like or dislike his comments. The point is that he is just the latest in a long line of Conservative commentators who have been targeted by a group that literally employs people to watch outlets like Fox News and search microscopically for any offensive words or phrases.

Media Matters and groups like them are relatively predictable. They isolate their target, then release their “evidence” of racism, sexism, homophobia, etc., then the advertisers are informed of the offensive statements, and ultimately the boycotts of said advertisers begins. It is a playbook that they have used time and again.

The Left would have you believe that they are the Party of tolerance and respect for all points of view. They want you to think this includes freedom of speech and thought. It does not. It is included if you only say and think what they deem acceptable to say and think. The question Conservatives should be asking often and loudly is, who has deemed these people the arbiters of what is acceptable speech? The dirty little secret is that, if you look deep enough, most of these self-appointed arbiters do not have stellar track records of their own.

The point is not that yet another Conservative or Fox News Channel commentator is the target of Liberals. Although every Conservative in the country needs to be well aware of what we are up against. The Left has figured out that the easiest way to silence Conservatives is to call whatever they say “hate speech”. The point is that every American, regardless of what side of the political spectrum you come down on should be very concerned about what has amounted to acceptable censorship. If the Left does not like you or your views, they feel entitled to destroy you, no questions asked.

In Tucker Carlson’s case, every night he vows not to let the Left win and the following day a few more details come trickling out. While it might sound a bit dramatic, more people are in fact realizing that we are in a war. Not just a war for our culture and values, but a war for the freedom to express yourself, and believe the way you wish. Because now it is not just about disagreeing, if they disagree with you, they believe they can abuse you verbally, physically assault you, vandalize your vehicle or other property, and ultimately destroy your entire life. They believe it is a valid means to a valid end. Whatever it takes. But where does it end? When is it too much? Is it too much when someone gets seriously hurt, or worse?

In the end, you can love or hate Fox News and their commentators, you can hate Conservatives. But make no mistake, if the thought police can attempt to destroy the life and career of a Tucker Carlson, they can do it to you, too.

The Left’s War on Women Continues With Women's Sports