Although human trafficking and migrant smuggling are both crimes, they are different from each other. The key difference is that individuals who are human trafficked are victims of a crime. In contrast, smuggled migrants (illegal aliens, undocumented immigrants) aren’t crime victims; rather they participate in a crime, i.e., the crime of unlawfully entering a country.

One trafficker explain the finances of human trafficking this way – when he sells a supply of drugs, the drugs are gone. In contrast, when he rents a human, i.e., for sex or for field labor, the human remains and can be rented again. 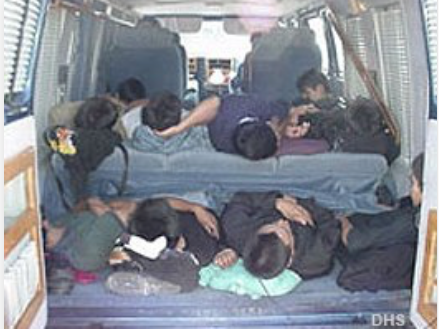 Migrant smuggling occurs when a person enters an agreement with a smuggler to be transported into a foreign country illegally. Migrant smugglers are called coyotes on the southern Mexico- United States (U.S.) border. Typically, once the migrant crosses the destination country’s border and the smuggler is paid in full, the migrant and smuggler have no further contact. Costs of smuggling a migrant from one country to another can include the cost of obtaining fraudulent documents which show the smuggled migrant is in the destination country legally.

For the most part migrant smugglers work alone or are part of a small group. When migrants contact a smuggler to transport them through an entire country, such as Mexico, migrants may have several smugglers. Each smuggler knows the geography of his region and has official and non-official contacts in that region that facilitate movement of migrants.

The table below is an adaptation of one provided by Human Trafficking Search that summarized the difference between human trafficking and migrant smuggling:

Trafficking awareness training is imperative for immigration, law enforcement, judicial officials and most importantly for you and me. Often, we see someone who we suspect is trafficked or in the U.S. illegally; but are reluctant to get involved. In reality, we must become involved. We live in our communities. We know (or should know) what occurs in them. Equally, true we should protect them.

Nevada’s attorney general posted a list of warning signs of human trafficking on the state’s website. After considering the list, I starred the ones that suggest migrants who were smuggled into the U.S.:

A Conservative’s Take on AOC's Green Plan: Let Them Try It First!