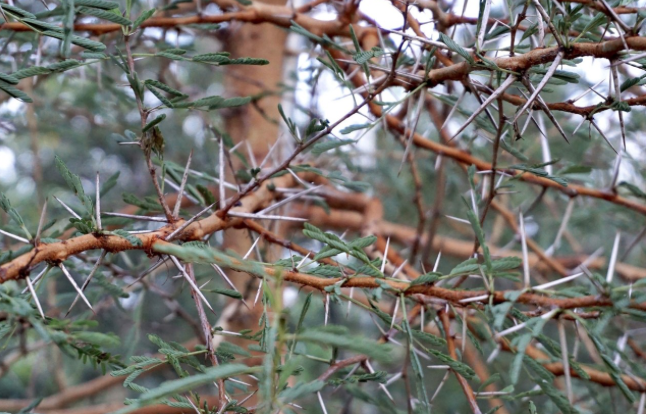 Acacia wood was the only wood used to build the Tabernacle.  Gold-covered acacia posts and cross bars stabilized acacia wood panels and held Tent of Meeting curtains in place. In the Tent of Meeting, the Table of the Presence (Showbread), the Altar of Incense (Golden Altar), and the Ark of the Covenant were built from acacia wood, then overlaid with gold. When Israelites traveled from one camp to another, the Tent of Meeting and Tabernacle were deconstructed, then moved.

The Bible named the wood used in the Tabernacle as shittah, which translates as acacia. Despite acacia’s plentiful presence on the Saini Peninsula, the tree had a drawback: a pair of straight, light gray thorns at the base of each leaf. When Israelites cut down trees and fashioned boards (planks) for the Tent of Meeting walls, furniture, and poles, they had to contend with these thorns.

God could have supplied trees without thorns for Israelites to make boards for Tabernacle structures. Why did God have Israelites use a tree with thorns? After all, the Tabernacle was an important structure of Israelite worship. Building it should have been easy.

One answer is that acacia tree thorns assisted Israelites to comprehend that just because they were out of Egypt didn’t mean that all would be smooth in their lives. In their new world, plants had thorns that could/would pierce and puncture their skin.

I am a PolitiChick. I am a conservative woman involved in politics. Similar to Israelites on Sinai, Christian women in the 21st century need to work with what is available in their world. In the Sinai, an acacia tree was available. In my world thorns are persons, political parties, and at times even church. Some days, I think that there are more thorns than flowers in my environment. Some people just have so many thorns (and, of course, I don’t)!

Because opinions differ from mine, doesn’t mean others’ opinions are wrong. Possibly, my opinions and perspective are wrong (gasp!).

God put me in this life to live and interact with what and who is here. My interactions should promote God’s glory. How can we learn to interact with thorny people and institutions? I’ve thought of three ways.

First, we must know what we believe and why. My pastor noted that there was one ancient Greek historian that wrote about an ancient Greek war. Yet, scholars believe the war occurred based on this one account. More than 500 individuals saw the risen Jesus; yet, millions of individuals don’t believe the account. If we claim to be Christian, we need to learn all we can about God and Christ; and know why we believe in them.

Second, we need to listen to different perspectives; and, at the same time, evaluate perspectives and opinions of others. I tend toward scientific data. Personally, I love statistics. When I was in college, there was a much-read book, “How to Lie with Statistics. One book point was that we need to go to original data and not rely on opinions of others. We must not accept other’s interpretation of data.

Third, we need to know when to keep quiet. If we don’t know about a certain issue, we shouldn’t give opinions about it. Several years ago, Pastor Mark asked me what I thought about…………….. I didn’t have an answer because I never thought about the topic. Certainly, I never investigated it. My response was that I would have to ponder the question. It is okay to admit that you don’t have an opinion on every topic.

Importantly, we can deal with thorny problems while not becoming a thorny person.