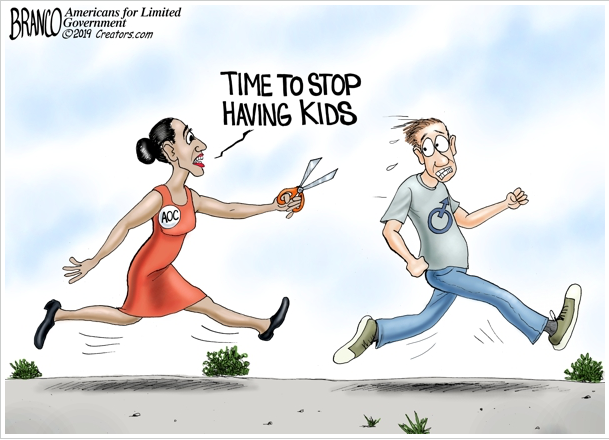 “Is it okay to still have children?” Rep. Alexandria Ocasio Cortez wondered while making a salad.

“It’s basically like, there is a scientific consensus that the lives of children are going to be very difficult and it does lead, I think young people, to have a legitimate question.”

It’s easy to dismiss her, but the loudest proponent of a Green New Deal doesn’t come up with original ideas, she just snatches extreme lefty ideas already being mainstreamed, and dumbs them down into a ridiculous and easily digestible form. Cortez hadn’t come up with the idea of cracking down on air travel or cows. And she hadn’t invented environmentalist proposals for human extinction on her own.

“Is It Cruel to Have Kids in the Era of Climate Change?” the New Republic had asked.

“If the looming 12-year deadline is missed,” the formerly liberal, and now radically leftist publication, suggested, “what purpose could life have in the face of an unavoidable, collective downfall?”

“Bringing children into a decaying world, without even the opportunity to do something about it, seems a cruel fate to inflict on someone, especially your own child.”

It was the very same argument about the cruelty of bringing unwanted children into the world that had been used for abortion that was now being deployed for a preemptive national infanticide.

But infanticide, personal or societal, of a child that exists or of all the children that never will, is not about compassion for the child. It is about the perception that the existence of the child is an evil.

The New York Times put that idea forward when it ran an op-ed asking, “Would human extinction be a tragedy?”

“It may well be, then, that the extinction of humanity would make the world better off,” it pondered.

More children mean more plane trips, more cows and more carbon emissions. Like the cows and the planes, the children must go for the environment to be saved to go on existing in splendid isolation.

If a tree falls in a forest and no one is around to hear it, does it make a sound? If there isn’t a single human being left on the planet, does it matter how pristine the woods, lakes and skies are?

New York State rolled out a law legalizing abortion up to birth. Governor Cuomo called it a, “historic victory for… our progressive values”. New York’s birth rate had already been dropping steadily.

New York’s progressive values have made it a place where birth rates keep dropping and the death rate keeps rising. It’s progressively aging while its youth population fell 4% since the 2010 census.

Virginia’s Governor Northam backed an infanticide bill that would allow abortion up to birth.

Rhode Island’s Gov. Gina Raimondo backed its version of an infanticide bill. The state already has the lowest fertility in the country. It also has the country’s highest rates for out of wedlock births and births by welfare mothers.

Vermont debuted an infanticide bill declaring that a, “fetus shall not have independent rights under Vermont law.” In 2016, Vermont had the lowest number of babies born since before the Civil War.

Nationally, every Senate Democrat, except three, refused to back the Born-Alive Abortion Survivors Protection Act compelling doctors to preserve the lives of babies born after a botched abortion.

“I want to ask each and every one of my colleagues whether or not we’re OK with infanticide,” Senator Ben Sasse asked.

The answer was given.

Politicians were once known for kissing babies. Now, if they’re Democrats, they kill them.

The Democrat political calculus of infanticide is so brutally grim that it makes the infant exposure of their spiritual pagan forebears seem almost humane.

Population increases in states like New York are driven by immigration. First generation immigrants are the safest political bets for Democrats. As the generations pass, the immigrants become worse bets.

The safest pathway to a permanent Democrat majority is abortion and open borders.

Global Warming provides the perfect political cover for a policy of suppressing births and promoting migration. Abortion will reduce our carbon footprint even as we welcome in “climate refugees”.

The central idea put forward by Cortez, the New Republic and the New York Times is an ancient one.

When drought and famine struck, the Pre-Greek Pelasgians would sacrifice every tenth child in an appeal to their gods. As with modern infanticide, ideology served as cover for pragmatic policy.

Judaism gave the pagan world the prohibition against infanticide. As Judeo-Christian influences wane, our pagan ruling class which puts its faith in the apocalypses of its PhD priesthood turns once more to murdering children in a ritual cleansing to appease the anger of Mother Earth at our unclean science.

Having children is an act of faith, in the future and in ourselves. But what if you believe, like Rep. Cortez, that there is no future worth having? That the world is nothing more than the narcissistic carpe diem of the moment in which all that matters is the moment of fame and the instant rush of experience.

An interesting thing happens when we look at the children of the 2020 field.

President Trump has five children. Mitt Romney, the previous Republican nominee, also had five children. McCain, the GOP nominee before him, had four children by his two wives. Barack Obama has two children. His Democrat predecessors, Bill and Hillary Clinton, had one daughter.

Senator Bernie Sanders has one son with whom he appears to have almost no relationship.

There are more prolific candidates in the wings. Beto O’Rourke has three children and Joe Biden has four. But those numbers make them well above average for a 2020 field that is light on children.

Individual lives are complicated. That is no less true of politicians than it is of anyone else. And so this is not about passing judgement or making assumptions about the personal lives of individuals. But the statistical trend lurking in these numbers paints a picture of the Democrat political elite.

Four of the 2020 candidates are childless. Only three have families that are above replacement rate. Replacement rate means that two people are doing more than replacing their own numbers. A society whose childbirth rates are at replacement rate isn’t growing. One that is below replacement rate is dwindling away. That’s true of much of Europe. It’s also true of the Democrat political elite.

The average number of children of the 2020 Dem field is 1.5. That’s below replacement rate.

These demographic snapshots are also philosophical trends. They show that on average, Republican leaders still believe in the future and their Democrat counterparts don’t. The enthusiasm for abortion is mirrored in their own lifestyles and beliefs. The future is doomed. A prematurely short amount of time from now the waves will roll over their beachside mansions. Starving refugees will flood Marin County. The future will belong to climate refugees from El Salvador and Somalia who will run the country. All the old white Democrats can do is graciously show them the ropes and implement socialized medicine.

And then have a chardonnay, short some energy stocks and watch the tide of change roll in.

Make America Great Again infuriates them with its assertion that the decline at the heart of the selfish nihilistic philosophy to which they have given their lives isn’t inevitable. And they will do everything to prove it wrong, and that their wreckage of their duty and country was right, by destroying America.

In Defense of Judge Jeanine