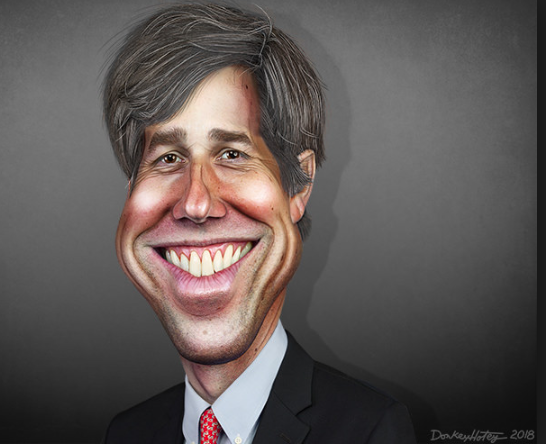 “This is our final chance,” Robert Francis ‘Beto’ O’Rourke warned while gesticulating wildly in a hipster Iowa coffee shop. “The scientists are unanimous that we have no more than 12 years.”

While patrons of the Lost Canvas wait for the apocalypse to overtake us, they enjoy espressos, bubble tea and art classes. There are also “handmade items from local artisans” for those preparing for a world without technology after the Green New Deal, which O’Rourke endorsed in his prediction of a twelve-year climate apocalypse, has outlawed cars, planes, cows, industrial civilization and machine tools.

Local espresso hipsters weren’t too worried that everything they know will be gone in twelve years, possibly including mango flavored coffee, which tastes as bad as it sounds, because they know that Bobby Francis doesn’t really mean that the world will end in twelve years: they’ve heard it all before.

Also, on his journey across the country, Bobby had lost track of the timeline. The IPCC deadline is supposed to hit in 2030. It’s now 2019. That means 11 years and some months until the end.

Are the scientists unanimous about that twelve-year deadline until the sky falls?

Bobby was quoting the UN’s IPCC report to the espresso oppressed of Keokuk, Iowa. The only things that the UN is unanimous about are not following New York City parking laws and hating Jews.

“It’s a line in the sand and what it says to our species is that this is the moment and we must act now,” Debra Roberts, a co-chair of the IPCC’s working group on impacts, declared. “This is the largest clarion bell from the science community and I hope it mobilizes people.”

Roberts is a South African city official who is environmentalist royalty and has sat on endless numbers of commissions, panels, teams and moots. Which part of the “science community” does she hail from? Her CV, which the IPCC site decided to take down as part of its commitment to transparency, notes that she has a PhD in Urban Biogeography from a Durban university that no longer exists under that name.

The IPCC is famous for the same two things as most madmen standing on street corners and shouting incomprehensibly at the top of their hoarse voices: predicting and postponing the end of the world.

“If there’s no action before 2012, that’s too late. What we do in the next two to three years will determine our future,” IPCC chairman Rajendra Pachauri had claimed in 2007.

In 2008, he appeared to have claimed that there was only 8 years left.

At a 2009 Senate hearing, two years later, Pachauri insisted, “we have just about 6 years left in which we will have to bring about peaking of emission.”

Pachauri was replying to a question from Senator Jeff Merkley. A decade later, the world didn’t end. And Merkley is still warning that if we don’t listen to the IPCC, the world and all its coffee shops will end.

Last year, Merkley pushed a Senate resolution in support of the IPCC’s latest world ending memo warning that the world will end “as soon as 2040”. That’s safer than the world ending by 2015.

What’s Pachauri’s scientific basis for making all these claims?

His CV, which has also been taken down by the IPCC site, notes that he has a PhD in Industrial Engineering and Economics. That’s better than Urban Biogeography, but not exactly relevant.

As a railway engineer, Pachauri could probably make the trains run on time like Mussolini. But his apocalypses always keep getting stuck in a limbo of missed timetables and snarled tracks.

Democrat politicians keep getting their apocalypse timetables from railway engineers and urban biogeographers before wandering into the nearest coffee shop to warn that the “End is Near”.

Bobby O’Rourke claims that we have only twelve, or eleven years and change, left. And that the “scientists are unanimous” in forecasting a world without coffee shops. Are they really?

Last year, the head of climate and ecological science at the Lawrence Berkeley National Lab was claiming that it was 25 years. Does that mean that California has 25 years while Iowa only has 12 years left?

And yet people are moving from California to Iowa.

The year before, the International Institute for Applied Systems Analysis was claiming that it was ten years. If you’re keeping track, that means the apocalypse may only be eight years away now.

In 2008, Andrew Simms, the co-director of the New Weather Institute, claimed that we had only 100 months to avoid disaster. And he urged a Green New Deal, long before AOC, as the answer.

Andy’s 100 months expired a few years ago. The world and its artisanal coffee shops are still here.

“I think we have a very brief window of opportunity to deal with climate change,” NASA’s James Hansen, the prophet of chicken littleism, claimed in 2006. “No longer than a decade, at the most.”

A decade later the planet is still here. So is James Hansen.

And NASA is back to reaching for the moon instead of warning that the world will end in [Insert Number of Years Here] unless we go back to the caves and cultivate tofu plantations under the stalagmites.

Then in 2009, Hansen warned that Obama had only four years to save the earth. So either by 2013, the earth was saved and we have nothing more to worry about.

Or this is heaven. Or perhaps hell, since Hansen is in it.

The world is always ending a few years down the road. If the false prophets are feeling casual, they may give us a decade.

It’s always urgent that we sign the latest agreement, implement the latest program and push more money into the pockets of the very people telling us that the world will end if we don’t.

Warmists mock religious believers, yet their shady tactics and millenarian nonsense makes even the nuttiest Times Square cultist waving a cardboard sign seem credible. Their cult is always promising that the world will end next Tuesday and then changing it to next Wednesday and then the week after that.

The Democrats are stuck in the coffee shop at the end of the world with Bobby O’Rouke. There are espressos, lattes, handcrafted soaps that smell like rancid fat and predictions that the world will end.

This is the cult and this is its catechism.

Its priests are railway engineers and urban bioengineers. There is a consensus. An absolute truth. Put a dollar in the plate to save the icebergs and see you in church next Sunday for another latte.

Vote ‘Beto’ to save the planet from the people who have children, drive old cars and use shopping bags. The infidels who get their coffee plain black, for under three bucks, and use store bought soaps.

Stop by the coffee shop with Bobby and you’ll understand why.

“Mass movements can rise and spread without belief in a god, but never without a belief in a devil,” Eric Hoffer, the longshore philosopher, once said.

In the hipster coffee shops, there is no god but the trend. The mass movement worships itself. The coffee shop is a celebration of yuppie consumerism infused with spirituality through the climate devil. Its leaders are narcissists who promise to save them from the apocalypse of the good life. That’s Bobby.

The numbers create a sense of urgency in the latte section before the next art class. Their contradictory nature is one of those mysteries of faith that all religions have. And if the prophets are an Indian railway engineer and a South African municipal official, that is the diversity which passes for lefty spirituality. Any movement that brings together different people from around the world must be vaguely sacred.

And the numbers do one more thing.

To paraphrase Mrs. Iselin, no one is talking about whether the world will end. Only when it will end.

Meaningless numbers move the debate past whether the world is ending and to the exact date when it will end. It assumes that the apocalypse is nigh and it’s only a matter of determining whether we will be reduced to cannibalism and socialism in 2030, 2040 or 2052. Until then, have another mango espresso.

It tastes just like the end of the world.

The Mueller Report: I Want a Refund!