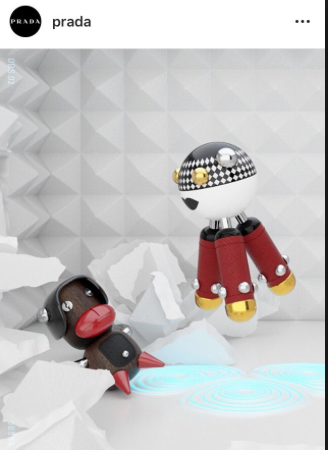 In December 2018, a lawyer for the Center for Constitutional Rights (CCR), a radical group supportive of terrorists, passed a display in the window of a Prada store in New York City. The display showed toy squids, aliens and monkeys that were part of the Pradamalia line, a name that combined Prada’ and ‘Animalia’. Alongside the $500 squids and aliens were two toy monkeys. One green and one red.

The green monkey named Toto wasn’t a problem. But the, now banished eighth creature, a red monkey named Otto, triggered Chinyere Ezie, the CCR lawyer, whose viral post declared, ” I’m shaking with anger”. According to Ezie, the red monkey was a clear case of blackface imagery.

The rest of the story: outrage, hashtags (#StopBlackface #BoycottPrada #EndRacismNow) apologies, boycotts, a Prada diversity council, and a campaign accusing other luxury brands of racism is familiar.

But something much more disturbing than a toy monkey in a Soho store happened in between.

The New York City Commission on Human Rights sent a cease and desist letter to Prada, in its own words, “demanding the company immediately stop displaying and selling the ‘Pradamalia’ goods.”

The Commission’s press release threatened that, “it has the authority to fine violators with civil penalties of up to $250,000 for willful and malicious violations of the Law.”

A government agency issuing an order to stop displaying an artistic product (that is what Prada considered its Pradamalia collection) and threatening fines is a blatant First Amendment violation. Yet this abuse of power went largely unnoticed by the NYCLU, which these days seems to spend much of its time backing a Judeophobic campaign against Orthodox Jewish schools in the city. And while the stakes, a cartoon monkey that Prada swiftly disavowed, may seem silly, the case has ominous implications.

New York City’s Human Rights Law is a sprawling and unwieldy mess, some of whose provisions would probably not survive a vigorous court challenge, and the Commission wields a disturbing amount of power, including the threat of prison for anyone who impedes its activities, but in this case it appeared to be defining speech as a discriminatory practice. And that is an attack on the First Amendment.

The Commission claims to fight for social justice, but its commitment to social justice appears to casually violate some of the most important civil rights protected by the United States Constitution.

The Prada case cast a brief gleam of light on how out of control a mostly obscure agency had become.

New York City had long ago rolled through the usual spectrum of legal protections for everyone from ex-cons to transgender men. And the Commission has been desperately concocting new legal protections. Its latest initiative declares that employers, including in the health care and food service industries, may not prevent employees, regardless of race, from wearing dreadlocks because that’s racial discrimination.

The Commission’s new guidelines insist that employees have “the right to keep hair in an uncut or untrimmed state.” Schools, public and private, are also forbidden from banning dreadlocks.

Commissioner Carmelyn P. Malalis boasted that “human rights warriors” had gone on Al Jazeera to discuss hair rights. Al Jazeera is Qatar’s Islamist propaganda network. Under Islamic law, women’s hair must be covered with anything ranging from a hijab to a burka. There are no “hair rights” in Islam.

Hair rights may sound silly, but what it really means is that restaurants will have to choose between keeping hair out of the steaks and salads of their customers, or dealing with the Commission on cases that will last for years and potentially cost the victims tens to hundreds of thousands of dollars.

When you find a hair in your soup in a New York restaurant, you can thank the Commission.

But the Prada crackdown and hair rights had become typical of a New York City government spinning out of control under Mayor Bill de Blasio and his even more radical New York City Council counterparts.

Amazon’s pullout and the rise of Rep. Alexandria Ocasio Cortez had focused national attention on the deranged radicalism and incompetence that had become the hallmarks of New York City politics.

What does the Commission actually do?

In 2014, a “small restaurant” in Brooklyn posted an ad on Craigslist seeking an “experienced waitress who can make cappuccino”. The Commission went after the unidentified 25-seat restaurant and its minority owner because he had used “waitress” instead of “wait-person” or “wait-thing.”

The owner told the representative of the Commission that he hadn’t done anything wrong and hung up the phone. He did not show up at any of the hearings and showed no interest in the kangaroo court.

In 2015, an administrative law judge held him liable for gender discrimination. Since Mr. Rosario didn’t show up, the Commission insisted he should be punished, “primarily because of the important public interest in ensuring cooperation with the Commission’s administrative investigation and hearing processes.”

The final order was signed by Commissioner Carmelyn P. Malalis three years after the original offense. Malalis has a B.A. in Women’s Studies from Yale and a seemingly boundless hatred for restaurants.

A previous order had hit Crazy Asylum, a restaurant, accused of also putting up a Craigslist ad for “waitresses” who could wear heels, with a $10,000 fine after wasting four years on this case. “Respondents were not sufficiently deterred from posting another advertisement indicating a limitation on gender even after they had received the Bureau’s Complaint,” the Malalis order fumed.

The inmates, with their degrees in Women’s Studies, were officially in charge of the asylum.

Also facing the Commission’s wrath was an Indian restaurant which had put out an ad for an Indian waiter or waitress back in 2013. The Commission conducted a sting operation by sending an email job application for “George Harris” and “using an email add-on that confirms when an email has been opened by the recipient, the tester confirmed that both emails were opened. However, the tester did not receive a response to either job application.” Would that hold up in court? Welcome to New York.

George, who didn’t exist, didn’t get the job. Neither did anyone else because the job no longer exists.

The Indian restaurant shut down, but the case kept going with a penalty finally issued four years later. Once again, Commissioner Malalis declared that, “Respondents’ failure to cooperate with the Bureau investigation and to participate in the OATH hearing process necessitates the imposition of civil penalties.” The worst crime the Commission can think of isn’t racism: it’s ignoring the Commission.

However, all the managerial staff for the Indian restaurant that doesn’t exist were ordered to attend a Commission-led training that will teach them it’s wrong to hire Indians to work at Indian restaurants.

The Indian restaurant and the jobs of all its employees had to be destroyed for social justice.

Meanwhile two Muslim taxi drivers, Baqir Raza and Mohammed Dahbi, who discriminated against a black woman and a lesbian couple, got off with no fines. Instead, even though their alleged actions were actually discriminatory, in the interests of “restorative justice”, a euphemism that means giving minority offenders a pass, they were instead ordered to educate other drivers about the evils of discrimination.

The Commission had spoken.

Under Republican governance, New York City began a major turnaround. What made that turnaround possible was a crackdown on crime and quality of life issues, along with creating an environment that encouraged businesses to stay in New York, and attracted new companies to do business there.

All of these three factors were reversed under Mayor Bill de Blasio. Term limits, instead of reforming government, pushed out professional politicians and replaced them with motivated radicals. Policing was once again crippled and quality of life offenses became protected behavior on its streets.

The New York City Commission on Human Rights is both ridiculous and disturbing, a Kafkaesque monstrosity exercising dubious powers for radical ends, holding its own hearings, inventing its own laws and spitefully punishing small businesses who dare to ignore the radical agendas of its identity politics.

New Yorkers needs some human rights activists to save them from their Commission on Human Rights.