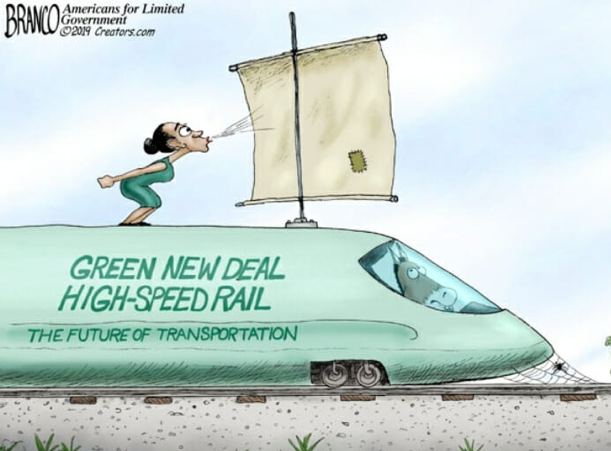 Personally I think we need to get behind the Alexandria Ocasio Cortez’s Green Plan…with caveats.

I think six cities should form the pilot program: Los Angeles, San Francisco, Seattle, Denver, Chicago, and New York. All should participate in a five-year program to lead the way into a “sustainable” future.

No energy from gas, oil, or coal should be allowed for those in these cities. All automobiles, trucks, and planes should be banned.  Electric vehicles powered by stand-alone industries would be allowed. No subsidized wind, solar energy, or any other forms of tax funded energy allowed.

With all the demand from these cities I am sure that the folks operating “sustainable” power generation will be able to mark up their product until they have a margin of profit…no?

I think we could also market millions of generators to these city folks, the kind that look like a bicycle except the chain drives a little generator instead of a rear tire.  We can set up many banks of these in multi-story buildings across each city and the folks can punch in with an energy card, peddle around the clock, and get credit for what they produce. If they are under 55 years of age and don’t produce, they don’t get to use.  The human body is an incredibly efficient machine and I can’t think of a more “sustainable” method of power generation.

The benefits would go beyond energy. Think of the people who could forgo the payment to the health club. Not only would people be getting in shape but many obesity issues would be addressed as well.

As far as getting food into the cities, I think rickshaws might work, or sailing or row boats if they are situated near water. They might see if Borax has any extra 20 mule teams they could borrow or buy and of course the Budweiser horses would be much in demand.

We are really talking green now. They would be wading in it, literally. Of course they could use the horse apples for compost and have grow stations for something other than cannabis and if they were really thinking they might try to gather a little of that nasty methane and use it.

It seems that their abhorrence of methane does not stem from the byproducts that assail the olfactory, but the knowledge that one pound of methane traps 25 times more heat in the atmosphere than a pound of carbon dioxide. I will go out on a limb here and predict that by the second winter into the pilot program those cities that live in colder climate will be greedily looking at all ways to produce and capture methane to burn for heat or power generation. If it gets really cold we might have to closely monitor those cooler cities to police any attempts to release more methane into the air in hopes of raising ambient temperatures.

For some the religion of climate change could see a paradigm shift. I have spent over 30 years in energy related fields, including gas and oil, so I know a little about the industry. I also come from humble beginnings and we lived for nearly 15 years without electricity and were dependent upon wood and coal for cooking and heat so I also know about doing without modern conveniences.

Experience is the best route to achieve concept and behavior modification in those who are simply ignorant.  As those cities, and the states they are in, step backwards into their future they will be amazed at the illumination and clarity they will experience as they behold the economic and social disintegration that will ensue.

Cheers, I am afraid we are along for the ride…so stay in prayer.

In Defense of Judge Jeanine