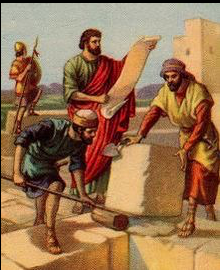 When Jews were permitted to return to Judea, most went to Jerusalem. Almost a century earlier, Babylonians destroyed most of the wall around Jerusalem when they sacked the city. For ancient civilizations, a city wall had physical and psychological importance. Physically, the wall protected citizens from invading armies, and prevented robbers and cut-throats from troubling residents. Psychologically, the wall was a source of security and pride. Not having a city wall was an embarrassment to residents, indicating extreme poverty, laziness, or indifference to human life.

Rehum was Governor of a wide region west of the Euphrates River that included Jerusalem. He didn’t want the Jews to have the security of a rebuilt wall around Jerusalem. He manipulated King Artaxerxes I of Persia to support his position. Here’s what happened.

Rehum called Jerusalem a rebellious and wicked city. The official letter concluded that once Jerusalem was rebuilt, the Jews would no longer pay tribute, custom, and toll. Royal revenue from the area would dry up. Rehum assured King Artaxerxes I that he and colleagues were writing only because they were loyal to the palace. They didn’t want to see the king dishonored.

Rehum requested that Persian archives be searched to verify that Jerusalem was destroyed because it was a rebellious city. He concluded with the dire warning that if the Jerusalem walls were built, the King would have nothing left west of the Euphrates River. Governor Rehum’s suggestion that the Jews were fermenting a rebellion.

King Artaxerxes I had the royal archives searched. He found that Rehum was correct. Jerusalem was a place of rebellion and sedition. King Artaxerxes ordered Rehum to stop further construction in Jerusalem. King Artaxerxes letter was emphatic—the Jewish threat to Persia shouldn’t be allowed to grow. Rehum compelled Jews to stop rebuilding city walls. Rehum may have destroyed some walls that were rebuilt by Jews who lived there.

Parallels between what happened 2500 years ago in Ancient Judea and what is occurring presently in the United States are clear.

A wall on the border between Mexico and the United States is important for security reasons. A wall will prevent criminals from entering the United States. Human trafficking and drug traffic will be reduced. Gang members, who have no regard for laws, will be kept out.

A wall is not immoral. A wall doesn’t conflict with any traditionally held moral (right and wrong) values of United States citizens. Just the opposite. A country’s citizens have the right to be safe. The chief executive of the United States has a moral duty to protect citizens and legal residents from external threats.

At I view the evening news, I ponder opposition to a physical barrier on our southern border. Mostly I hear obfuscation of the truth – just as Rehum obfuscated the truth in his letter to King Artaxerxes.

About 75% of caravans is composed of males, rather than families seeing asylum from threats of physical harm. My husband noted that many individuals in the caravan wear upscale clothes and have smart phones. He noticed phones because he has a flip phone.

We lived in El Paso Texas for eight years. El Paso is on the US-Mexican border with Juarez. I worked closely with a middle school in El Paso. Most students were undocumented. When students enrolled for the year, school officials weren’t permitted to ask if they were legal residents. The school provided students with free breakfast and lunch. Much of the teaching for these six through eighth graders was in Spanish; children couldn’t understand English. Often students entered the United States on Sunday evening and left on Friday afternoon to return to parents in Mexico.

Likely, a wall wouldn’t stop this abuse of our public-school system. A wall won’t solve every problem with immigration and abuse of the US. However, a wall will add protection and security for legal citizens, the same as a wall around Jerusalem protected citizens of that city. I believe that the wall is Step 1 in a larger issue.

Jihadist Psychopath's "I am the Victim" Charade