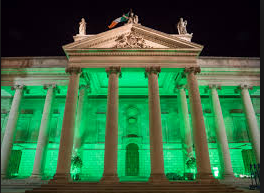 The Irish Parliament is in the process of introducing and anti-Israel bill declaring their intention to block and boycott gods, products and services from Judea and Samaria, what they call the West Bank, Jerusalem, and the Golan Heights, parts of the Jewish State of Israel.

This divisive intervention is nothing more than a slap in the face of the Jewish State of Israel and a shocking and untimely initiative that will prevent the violent, divided and rejectionist Palestinians from coming to the negotiation table.

This unwelcome law will, if approved, will end up rebounding legally and economically against Ireland, as warned by Ireland’s foreign minister, Simon Coveney.

It is an intellectually dishonest piece of legislature.

The bill is anti-Semitic. The abusive steamrollering of this bill which is intended to penalize individuals or companies operating in what they consider “occupied territories” stipulate only goods or services produced by Jewish farmers and Jewish industrialists.

Furthermore, the end result of this ill-conceived biased legislature will hurt the Palestinians, the very people they intended to help. As with all anti-normalization, anti-Israel, acts the first victims are the Palestinian workers, of which there are thousands, who benefit from Israeli scale jobs, salaries, promotions, and social benefits.

The bill, if effective, will force these people into unemployment. Example, SodaStream employed 660 Palestinians and 500 Israelis and had to move its factory from Judea & Samaria to the Negev following a massive boycott campaign by the BDS Movement. Result? BDS forced 660 Palestinians out of well paid jobs into unemployment to be replaced by Israeli Bedouin workers. Is this really what the Irish want to achieve?

Who do the Irish think they are helping? Hamas in Gaza, or the minority rule of the PLO-led Palestinian Authority in Ramallah? Are they aware of the decades-old conflict between these two warring parties? And why has Ireland decided to punish Israel and not the rejectionist side that refuses to live as peaceful neighbors with Israel?

The bias and double standards of the Irish bill are patently obvious. The Irish “boycott occupied territories” bill doesn’t mention Israel, but it names locations and excludes Turkish commerce, goods and tourist services in occupied Northern Cyprus, Russian businesses in occupied Crimea and the Ukraine, Chinese interests in Tibet, or Moroccan farming in Western Sahara, to name but four of the many global disputed or “occupied” territories.

The bill, in Israel’s case, ignores the principles of armed conflict. The drafters of the bill listed the West Bank and east Jerusalem, but gratuitously also threw in the Golan Heights.

It also shows that the authors of this biased bill know nothing about the laws of armed conflict which permits a country to maintain territory gained in a defensive war against an aggressor. This clearly is the case with Israel annexing the Golan Heights.

When Israel was established in 1948, five Arab armies invaded the nascent Jewish State in a declared war of annihilation. Jordan illegally attacked Israel in this aggressive war and captured and occupied Judea and Samaria and parts of Jerusalem. It was Jordan that renamed the territory as the West Bank of Jordan, meaning to the west of the Jordan River.

Egypt attacked, captured and occupied the Sinai and the Gaza Strip. Syria, Iraq and other Arab forces entered the war of annihilation but, somehow, Israel managed to hold off the combined Arab armies until an international ceasefire was arranged.

This left Jordan occupying the West Bank (Judea and Samaria) for decades, yet nobody thought to protest their “occupation of Palestine.”

In 1967, the Arabs tried again to destroy Israel, but Israel was better prepared. The Jordanians were driven out of Jerusalem and from Judea and Samaria back across the Jordan River. The Israelis also drove the Egyptians out of the Sinai and the Gaza Strip and the Syrians off the Golan Heights.

The Arabs, licking their wounds, met to begin a war of attrition based on the infamous “three No’s,” – no recognition, no peace, no negotiations with the Jewish State. This has become the slogan of the Palestinian and BDS movements, to which the Irish Parliament has become a biased player.

In 1973, the Egyptians and Syria mounted a surprise attack against Israel on Yom Kippur, the holiest day in the Jewish calendar. Israel was caught off guard but managed to mobilize and defeat the two invading armies. In a bloody tank battle, Israel managed to drive the Syrian army off the Golan Heights overlooking the Sea of Galilee. Syria has remained a malevolent and intransigent enemy, and Israel annexed the Golan Heights in 1981 after suffering further Syrian threats.

The Irish Parliament is now acting as a proxy for the brutal Assad regime by including the Golan Heights in their punitive legislation against Israel.

It was once considered immoral to divide a city politically and ideologically. Think Berlin and its wall. Now, Ireland wants to divide Jerusalem. Has it not learned anything from Belfast? Jerusalem is a united city where Jews, Christians and Muslims mingle, as any tourist can attest. It is also the capital of the State of Israel. But the Irish legislators want to divide this holy city. They will not sanction and boycott Arab goods and services. They will punish only its Jewish residents. This is anti-Semitic political practice.

Jordan illegally annexed Judea and Samaria (the West Bank) including Jerusalem in 1950. King Hussein, in 1960, called Jerusalem not Palestine but, “the second capital of the Hashemite Kingdom of Jordan.” Jordan gave Arab refugees who had left their homes by order of the Arab High Command, during the Arab war of annihilation, Jordanian citizenship though they ensured that a specific United Nations refugee agency kept them in refugee camps. While Jordan occupied Judea and Samaria they did nothing to allow these Arabs to return to their homes. Instead, they kept them as political pawns in a cynical diplomatic battle against Israel or, as they told them, until the Arab armies will come and liberate Palestine and drive the Jews into the sea. Hence the war cry we still hear today, “From the River to the Sea, Palestine will be free!” a slogan for a world without Israel.

The Palestinian movement, although divided against itself, is, at heart, part of that futile Arab war of annihilation against the Jewish State, and they look on the pending Irish bill as simply another shot in their attempts to dislodge Israel.

The malevolent Irish lawmakers can expect heavy blowback from a number of sources, including the EU which has decreed that such discriminatory legislation is against EU principles. It will also be subject to counter sanctions from the US Administration and twenty-seven American states. All have passed stringent laws banning contact with any entity practicing BDS against Israel. State and federal laws may lead to divestments from Irish pension funds, stop trade negotiations with Ireland, and instruct corporations not to invest or do business with entities that conduct discriminatory practices.

This then is the essence of what is likely to occur as a result of this biased, anti-Semitic bill that has cast a terrible stain of the character and reputation of the Irish Parliament that, with this bill, will be speaking in the name of the whole of Ireland.