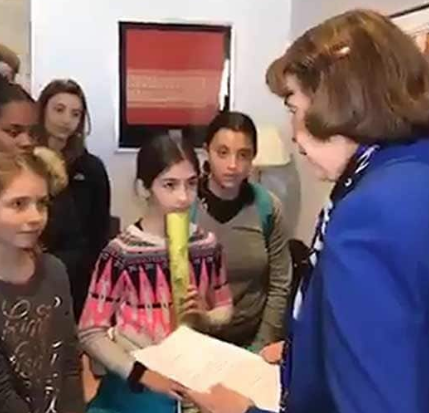 Never did I think I would ever find myself agreeing with anything Sen. Dianne Feinstein (D-CA) had to say, but welcome to modern day America, where insanity reaches new heights every day. We have become a country where craziness reigns supreme. The more outlandish the idea, the more traction it gains. It boggles the mind. However, it is an encouraging sign when even a diehard liberal such as Feinstein shows they are capable of setting limits in regards to the level of nonsense they will support.

Feinstein was confronted by a group of youngsters representing the Sunrise Movement, which is an organization devoted to stopping climate change. I’m not sure what exactly they teach children but it was clear that the ones confronting Feinstein were convinced the Earth can only sustain life for another decade before it becomes a barren wasteland. Unless this group was comprised of child prodigies who have been trained in scientific research, it’s safe to assume their position is based on whatever they have been told, regardless if it’s reality or not.

The members of the Sunrise Movement made some good points to Sen. Feinstein such as the government’s purpose is to serve the people and in order for government to act in such a manner we elect people to carry out our will. Feinstein responded with equally valid observations such as people under the age of 18 can’t vote and if someone is disenchanted with the government, they can run for office themselves. She also noted that you can’t insist on having your way without some room for compromise.

It was an unscripted moment that cut through all the typical facades we see from politicians. Feinstein knows how the game is played. I don’t agree with her platform or what she represents but in that moment, she flashed a moment of honesty. She was confronted by a group of children indoctrinated in a radical ideology. These kids had no idea what they were talking about or how ridiculous their demands sounded. They needed a healthy dose of the real world and Feinstein put them in their place.

I can’t think of any country throughout the ages as powerful and as wealthy as the United States, so preoccupied with its own self-destruction. If you could go back in time and show President Reagan what has become of our nation it would undoubtedly cause him great despair. His first question might be this: You mean to tell me that after winning the Cold War and defeating the threat of communism, Americans of the future will decide that the Soviets were right after all and that their system was actually better than ours the whole time?

I certainly wish I had the wisdom to comprehend how socialist/communist ideals could take root in what has been a country based on capitalist ideals? There has never been and never will be a country based on Marxist ideals that will be successful. The populace will always end up revolting against it. Does anyone seriously think that everything should be run by the government? Please point to a government-run organization that epitomizes efficiency. Does anyone enjoy waiting in line at the local Post Office? If so, then you will be ok with a socialist society.

What has led so many Americans to adopt such outlandish ideaologies? A lot of it has to do with the way young adults have been indoctrinated.

Reagan understood how socialist ideals can take root. Reagan often used a quote he attributed to Norman Thomas, long-time leader of the Socialist Party in America: “The American people would never knowingly vote for socialism; but under the guise of liberalism, they would adopt every fragment of the socialist platform until one day America would be Socialist without knowing how it came about.” Apologists for Thomas argue that he never made such a statement. However, to me that isn’t the point. It’s irrelevant where Reagan got the quote. For all I know he made it up himself, which to me only adds to his tremendous legacy. Reagan truly understood liberals. Once Reagan comprehended what you were telling him, his next question would be: Who are the Democrats responsible for such blatantly socialist legislative goals?

The answer would be: Sen. Ed Markey (D-MA) and Rep. Alexandria Ocasio-Cortez (D-NY) as well as a host of other proponents of left-wing ideology. Their ‘Green New Deal’ which derives it’s name from FDR’s ‘New Deal’ is truly terrifying for two reasons. First, it seeks to turn America into a full blown socialist country. Second, there are people who take this lunacy seriously and actually embrace it.

Per the proposed legislation some of the Green New Deal’s goals are to:

* Provide all members of American society the opportunity, training and education to be a full and equal participant in the transition, including through a job guarantee program to assure a living wage job to every person who wants one;

* Focus on communities where the fossil fuel industry holds significant control over the labor market, to ensure workers have the necessary tools, opportunities, and economic assistance to succeed during the energy transition;

* Mitigate deeply entrenched racial, regional and gender-based inequalities in income and wealth (including, without limitation, ensuring that federal and other investment will be equitably distributed to historically impoverished, low income, deindustrialized or other marginalized communities in such a way that builds wealth and ownership at the community level);

* Include additional measures such as basic income programs, universal health care programs and any others as the select committee may deem appropriate to promote economic security, labor market flexibility and entrepreneurism;

Socialism makes grandiose promises that can’t possibly come to fruition because it puts government in charge of everything. The New Green Deal is no exception. The great fallacy is that government can somehow fix the inequalities that exist amongst Americans. That will never happen because the government has no profit motive. Who is going to run things better: Someone who has a personal financial interest at stake or a group of people who have no personal investment? The end result of socialism will always be a corrupt government regime that is only interested in perpetuating its authority in order that those who run it might enrich themselves, not the populace.

The reality is that our society is based on work and business, not ideology. It doesn’t take a person with a Ph.D. in Business to figure out there is no way everyone can be given a job that pays great wages. It violates the basic laws of supply and demand. Absent that it would be up to government to fix the inbalance. Do you think government is THAT competent. Ultimately, everything including health care would decline because if everyone is paid the same, what is the incentive to aspire to more? The end result would be to discourage and eliminate entrepreneurial efforts. Plus, what if scientists aren’t correct about global warming? One would have to be very naïve not to understand that it isn’t a simple issue of science, but one with much more complex political and economic motivations..

I think my parents did me a favor when they taught me that no one owes me anything. I’m not entitled to anything from the world at large. I was taught that no one gives you something for nothing. If I wanted to earn a good salary, I’d have to work for it. Success isn’t handed to you. You earn it.

Barry Shaw: The Battle Lines of the Israeli Elections Have Been Drawn