“One thing you can’t hide
Is when you’re crippled inside”
-John Lennon, Crippled Inside 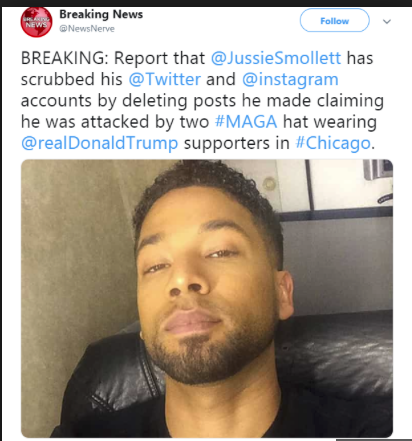 When I heard about “Empire” actor Jussie Smollett being physically attacked, on January 29th in Chicago, I was disturbed and puzzled. After all, no one should face violence because of their race or sexual orientation. That was disturbing. Mr. Smollett claimed that he was attacked by two white males wearing ski masks.  Smollett said that a makeshift noose was hung around his neck and bleach was poured onto his body. Smollett, who is African-American and openly gay, said that the males shouted out racist and homophobic remarks to him. When they left after the attack they allegedly stated, “This is MAGA country!”

Which Trump supporters were these I wondered? They are no one that I know or have met, hence my puzzlement.

The incident was widely reported in the press. Celebrities like Ariana Grande, Katy Perry and John Legend expressed their solidarity with Smollett and their horror about his attack. New York City Council Speaker Corey Johnson openly called the Smollett attack, “An attempted modern day lynching!” House Speaker, Nancy Pelosi, tweeted the following statement; “The racist homophobic attack on @Jussie Smollett is an affront to our humanity. No one should be attacked for who they are or whom they love. I pray that Jussie has a speedy recovery & that justice is served. May we all commit to ending this hate once & for all.”

Other Politicians like Corey Booker, Maxine Waters and Kamala Harris, among others, also expressed their rage. Well, never let a tragedy go to waste, right?

Now, over two weeks after the attack, Chicago Police are reporting that they believe Jussie Smollett paid two Nigerian men, who are brothers, to attack him. Per the Chicago Police, a staged and, allegedly, a rehearsed attack. The two “attackers” are cooperating fully with the Chicago Police and Smollett is attempting to engage legal council. Additionally, Pelosi is now attempting to find the delete button on her Twitter account. Celebrities are withdrawing their support or are continuing their support in a milk toast manner. There have been press reports that authorities are considering filing charges against Jussie Smollett.

Now I am not a lawyer (Thank God for that) and I am not aware of exactly what charges should be filed against Smollett. But with a cognizant mind at hand, I have a suggestion for the Chicago District Attorney:

Jussie Smollett should be charged with a hate crime.

If these allegations against Mr. Smollett are proven true, he should be prosecuted fairly under the statutes applicable to his crimes.

However, I don’t care if he did this for publicity, to create divisiveness or to promote an agenda, this is a hate crime. Smollett perpetuated hate with his alleged actions and it is a strata of hate that I am going to address here.

Why can’t someone wear a MAGA hat without fear of recrimination? Why do I have to be wary of expressing my support of President Trump to certain individuals? Why should I, as an American citizen, face potential violence for my political beliefs?

This has gone far too far. This is politicized racism and will be the lasting legacy of the previous administration in the division of these yet to be United States. Is this what the Obama transformation of America looks like or is this just progressive privilege?  There is enough real hate and prejudice that we need to address within the national dialogue.