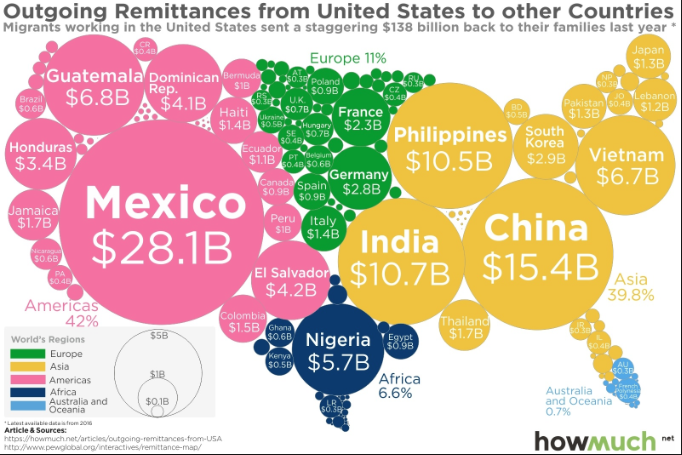 My favorite waitress is in the United States (US) illegally. Her employer pays her in cash. I have no idea whether or not she pays US taxes. She sends money to her parents in a Central American country. Her daughter lives there with the waitress’ parents.

Annually, huge amounts of money is sent by both legal and illegal immigrants to individuals, usually family members, living outside the US. The word for this money is remittances. Several countries receive more in remittance money than in official financial aid from the US.

The US is the world’s chief source of remittance money. According to a 2016 World Bank report, $56.3 billion in remittances left the U.S. in 2014. For some countries, remittances are a staple of national economy. For example in 2017, remittances were the second largest source of income in Mexico. Past Mexican President Peña Nieto noted that millions of Mexican families, principally those with low incomes, depend on money sent from the US. One of his stated goals was to maintain and increase remittances from the US.

If a person living in the US wants to send money to another country, they have several options. They can go online and make an electronic transfer; the transaction can be done on a mobile phone. Money can be sent at a convenience store or bank. Often immigrants, particularly illegal ones, don’t have a bank account. They use MoneyGram or Western Union to send remittances.

Mexico’s Consumer Protection Agency contended that the cost of sending $300 from the US to Mexico varies. Chicago has the lowest sending cost at $5.50 while Houston and Indianapolis have the highest ($8.90). The sending costs from other cities are: $7.50 from Dallas, $8.50 from Miami, $8.70 from New York, and $8.80 from Los Angeles, Sacramento, and San Jose.

Remittances are controversial, both for the sending country and for the country receiving the money. One problem is that often payroll/income taxes haven’t been paid on remittance money. Further, remittance money can be subject to fraud. Sometimes, companies defraud hardworking individuals out of money that they think is being sent to their home country. Senders use remittance channels to funnel ill-gotten gains abroad.

In 2019, Mexico inaugurated a new socialist president, Andrés Manuel López Obrad. His party, MORENA, has a large majority in both Mexican houses of Congress. So far he has reassured international markets and local business leaders that he will respect the autonomy of the Central Bank, keep the country’s books balanced and inflation under control, and not raise taxes. President Obrad committed to put the poor “first” and made campaign pledges for subsidies for peasants.

I don’t know the new Mexican president’s position on remittances from the US. My position is that immigrants who enter the US illegally and are paid untaxed wages are thieves. These illegals are stealing from me. If immigrants want to send money out of country, that is their business; however, money earned in the US and should be taxed, just as my earned money is taxed. We must stop the two-tier economic system in the US.

Daniel Greenfield: What's Bad for the Media is Good for America