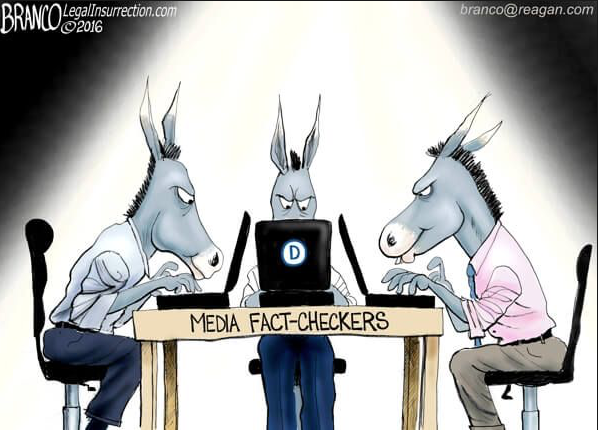 The winter freeze might have shut down entire cities, but it couldn’t slow down job growth as the economy roared through the cold and shattered projections with 304,000 non-farm jobs in January.

The media is freezing colder than the polar vortex with thousands of lost jobs in January and February.

Gannett, the giant behind USA Today and many local lefty papers such as the Arizona Republic, the Detroit Free Press and the Milwaukee Journal Sentinel, fired 400 employees.

McClatchy, another newspaper giant, which publishes the Miami Herald, the Kansas City Star and the Charlotte Observer, among many others, announced voluntary buyouts for 10% of its employees after having fired 3.5% of its staff or 140 employees back in August. Tronc, another publishing giant, has already been making major cuts at newspapers like the New York Daily News and the Los Angeles Times.

Reuters expects to cut 3,200 jobs or 12% of its global workforce, closing 55 offices by 2020. BuzzFeed fired 15% of its staff or 220 employees, wiping out its national security desk, most of its national news desk, LGBT team and entertainment team.

Verizon, which through a series of bad business decisions had inherited the Huffington Post, cut 7% or 800 jobs in its media division. HuffPo dumped its health and opinion section, along with various reporters. Vice Media is laying off 10% or 250 employees from its global staff. Mic’s staff was mostly let go back in November. And the bloodletting isn’t over. It’s just beginning.

Why is the media failing while the rest of the economy is thriving?

In 2009, as the economy was tanking, journalism school applications increased sharply. As the economy began to recover, J-School enrollment began to fall. Call it the Vulture Effect. Carrion eaters are attracted to death. When the death rate drops, they have to either learn to kill things or face extinction.

Consider the media’s destructive behavior of the last few years a classic example of CNN carrion eaters trying to trick the predators into fighting each other and making more carrion for them to feast on.

By 2016, the Bureau of Labor Statistics was projecting a 10% decline in employment for reporters and correspondents. After this winter, the BLS may need to sharply revise its estimates upward. Major media organizations are dumping 10% of their staff as a routine response to business model reverses.

The media does best when things are bad. It’s the same reason why Democrats have their strongest footholds in cities with massive poverty, gun violence and infant mortality. Or why starving children dig through the trash in Communist countries while the red billboards overhead tout Socialism.

Lefties claim that they want to make things better, but they only gain power by making things worse.

The media is terrible at trying to make good news happen. Its shrill insistence that the economy had recovered 5 minutes after Obama took the oath of office on a reflection in the mirror convinced no one. After 5 years, it had become a running joke with the flavor of late Soviet propaganda about wheat harvest percentages. But it can be quite effective at spreading bad news and convincing people it’s true.

Just look at how the media has managed to convince people that the global warming sky is falling, that Facebook trolls are a national security threat and that President Trump gets all his orders from Moscow.

If the media is going to make any money and gain any power, it’s got to go negative. But negativity is a tougher sell when times are good for most people. Except for the brooding vultures of the media.

A winter of Trumpian economic growth has been very bad for those birds.

The January media layoffs actually involve two different tracks of the industry. There’s the dead tree media track of the newspaper giants who have been steadily bleeding jobs ever since their customers realized that they didn’t need to pay twelve bucks a week and get ink smears on their hands just to read the local rewritten versions of the same lefty talking points from New York and Washington D.C.

And then there are the digital media operations fueled by venture capital cash that were going to be the Great New Hope of the mainstream media with slick snarky stories, their own in-house ad shops and lots of millennials writing about social justice outrages trending on social media for other millennials.

That’s the new media catastrophe. And the one that has occasioned the real wailing and tooth-gnashing.

“The BuzzFeed Layoffs as Democratic Emergency,” Farhad Manjoo shrieked in the New York Times. Farhad meant the other kind of “democratic”, but his headline was unintentionally correct. The media is a massive force multiplier for the Democrats. If it didn’t exist, national politics would look very different.

Imagine an America in which Democrats eavesdropping on Republicans, supporting cop killers, ISIS, Iran and infanticide weren’t met with immediate walls of media spin, lies, fake explainers and even more fake fact checks. Then imagine an America with a border wall, voter ID and a real War on Terror.

That’s a “Democratic emergency”. No question about it.

If the media falls, it will be the greatest moment for democracy since the fall of the Berlin Wall. The collapse of the Soviet Union revealed that the Evil Empire was really a bunch of boring bureaucrats who, through the magic of ideology and mass murder had acquired the ability to terrorize millions of people.

The unraveling of the media will reveal that the echo chamber that told us what to do and think, that cost hundreds of thousands of lives and trillions of dollars, that stole generations of progress and prosperity from a great nation, was really a bunch of otherwise unemployable Marxist grad students.

The media has blamed Google and Facebook for not giving it enough traffic. It’s redoubled its efforts to demand that the dot com giants give them even more money (Google and Facebook have already pumped hundreds of millions of dollars into the media), more privilege for their traffic and more power to censor conservative media under the guise of ‘fact checkers’ fighting a ‘fake news’ emergency.

Hatred has also been hurled at Gannett, McClatchy, Tribune, BuzzFeed, Bustle and Vice management which are pursuing merger and consolidation plans that will cost even more media jobs. They point to the profitability of some of these companies as proof that the layoffs are really capitalist greed.

The digital media empires with their fake news, explainers and snarky social justice commentary were built by convincing investors that they could be as profitable as actual tech companies. BuzzFeed and the rest of the gang could have just shrugged and announced that failing to meet expectations would be the new reality. And that if their investors don’t like it, they can go and invest in tech startups.

Then in a year or two, it wouldn’t be a few hundred jobs being cut, but a few thousand.

Digital media is full of millennial socialists with an Ocasio-Cortez level grasp of economics who spend six figures on a useless degree in journalism from Columbia and are convinced that destroying Facebook will save them. Even though Facebook is the only reason that clickbait parasites like BuzzFeed even exist.

Finally, many in the media blame President Trump. In an ocean of economic prosperity, the media has become a desert island full of cannibalistic savages, devouring each other, while praying to Mueller.

But that’s not because of anything Trump did to the media. It’s about what he isn’t doing.

Obama’s divisive policies created social, cultural and economic insecurity across the spectrum. Trump’s politics have brought prosperity and economic security. And the media has refocused on stirring up insecurity among Democrats and Never Trumpers because they are its only remaining demographics.

The good times are here. And the media’s only customer base consists of people who don’t believe it.

A growing media indicates a loss of confidence by Americans. It shows that the divisive leftist tactics of the media are paying huge dividends in fear, uncertainty and doubt among ordinary people. A shrinking media however indicates that we are once again becoming an optimistic and confident nation.

The media’s loss of jobs is a very good thing. It’s a statement of confidence by Americans in America.