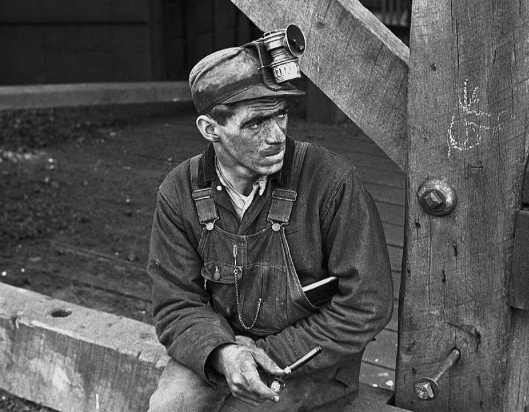 When I was growing up, the man who delivered coal to our school jokingly warned me that if I didn’t study hard and get good grades, I would also end up delivering coal.

It was a joke. But it also wasn’t.

Working with coal was hard and dirty. Even if all you had to do was deliver it. And, there, far removed culturally and geographically from America and its old minstrel shows, coal dust meant hard work.

Once upon a time, the Left romanticized coal dust and the coal miner as symbols of the oppressed working class. Then it degenerated into a movement of university bred urbanites with contempt for hard work and a calculated ignorance of the “brown energy” that makes their lives possible.

The disdain and ignorance reached a fever pitch with two media articles conflating coal dust with blackface. The Arizona Republic, ran an editorial by Rashaad Thomas, a self-described poet, essayist and Buddhist thinker, who was offended by a photo of Welsh coal miners hanging in a restaurant.

“Phoenix restaurant says this is a photo of coal miners. But I see offensive blackface,” Thomas complained. “My concern that the photograph of men in blackface was a threat to me and my face and voice were ignored. A business’ photograph of men with blackened faces culturally says to me, ‘Whites Only.’ It says people like me are not welcome.”

The photo is actually of Welsh coal miners from a century ago. And its political context is a million miles away from the case of Governor Ralph Northam in Virginia and mockery of African-Americans.

It does have a political context, but one that has nothing to do with race, and everything to do with class. The inability of Thomas and Arizona Republic editors to immediately grasp this encapsulates how detached they are from the working class.

Old lefties would have recognized and understood the political meaning of the photo. It was taken during the great coal strike of 1910 and 1911. The early twentieth saw massive strikes by coal miners both in the United States and the United Kingdom. The Tonypandy riots, which is the context for the coal miner photo, was one of the larger and more explosive confrontations which spiraled into a larger strike and culminated in Churchill, then Home Secretary, sending in the British Army as backup.

The strike would grow until one in six miners in South Wales were part of it.

The photo depicts coal miners in Cwmbach, Wales, discussing the upcoming strike. The coal boom had transformed Cwmbach, but working in the coal mines was risky with mine collapses that killed dozens. Cwmbach became part of the strike fairly early which actually started when the mines stopped allowing miners to take waste timber for their own homes. The men in the photo are relaxing in the pub, knowing that they won’t be going down into the mines again, but also that they won’t have any work.

They’re having a drink while knowing that it may be a while before they will be able to afford one again.

The significance of this is lost on the Arizona Republic’s Buddhist poet who writes, “The photograph shows coal miners’ faces covered in soot. The context of the photograph is not the issue.”

But the context is an issue. It’s just an issue that his fellow lefties once embraced, before abandoning.

The strike is still commemorated in the UK, where the romanticizing of a working class that actually worked with its hands still lingers a little, but strikes in the US invariably involve municipal workers.

Driving through Los Angeles in the rain a few weeks ago, you couldn’t escape men and women in red bellowing through megaphones outside schools to demand that their 6% raise be a 6.5% raise. And the usual teachers’ union obsession with destroying charter schools, testing and student education.

That’s what a strike looks like in 2019. And it’s very different than the dirty men in that pub.

“If somebody wants to build a coal-fired power plant, they can. It’s just that it will bankrupt them,” Obama had boasted.

“We’re going to put a lot of coal miners and coal companies out of business,” Hillary Clinton told West Virginians.

She didn’t. But coal miners helped put her out of work and put Trump in the White House. American coal miners aren’t threatened by cartels, but by environmentalists. They’re not oppressed by billionaires who own mines, but by billionaire lefties like Michael Bloomberg who don’t own mines, and don’t want any to exist. And hardly a day goes by without another proposal to replace coal mines with lavender farms, in a recent Bloomberg magazine, or a proposal to teach coal miners how to code.

In recent years, the media was full of proposals to teach coal miners to code. “Hillbillies who code,” was one of the ridiculously condescending media headlines. But when digital media ventures recently began laying off hundreds of journalists, the media insisted that telling them to “learn to code” was a hate crime. It’s one thing to suggest that coal mining is obsolete, but another to suggest that journalism is.

But the Arizona Republic and the New York Times make a compelling case for journalism’s obsolesce.

Unhappy with all the attention that the Arizona Republic was getting for conflating coal with blackface, the New York Times decided to run an op-ed accusing Mary Poppins, specifically Bert, of blackface.

“’Mary Poppins,’ and a Nanny’s Shameful Flirting With Blackface,” the old gray lady huffs and puffs.

The rant by Daniel Pollack-Pelzner, who had amassed a PhD in English from Harvard, contends that, “Part of the new film’s nostalgia, however, is bound up in a blackface performance tradition”.

“When the magical nanny (played by Julie Andrews) accompanies her young charges, Michael and Jane Banks, up their chimney, her face gets covered in soot, but instead of wiping it off, she gamely powders her nose and cheeks even blacker,” he writes. “Then she leads the children on a dancing exploration of London rooftops with Dick Van Dyke’s sooty chimney sweep, Bert.”

“One of the more indelible images from the 1964 film is of Mary Poppins blacking up,” claims Pollack-Pelzner, who has a chair in Shakespeare but can’t tell race from class.

The scene that Harvard’s best and brightest is referring to has Bert singing about the life of a chimney sweep, “Tween pavement and stars is the chimney sweep world/Where there’s ‘ardly no day and ‘ardly no night”, while taking middle class children out of their sheltered home and into the mysterious grime of a working class world.

A world that is both magical and dirty. And one that romanticizes the coal dust of hard work.

What was once a politically subversive scene has, much like the coal miner photo, become magically reactionary with the passage of time and the distancing of the Left from the working class.

Does Daniel Pollack-Pelzner, a member of the faculty at the University of California Dickens Project, really not understand the role of the chimney sweep in British life? Or British class structure? Did he somehow manage to get a PhD in English at Harvard without ever once encountering Blake’s The Chimney Sweeper “a little black thing among the snow”? Did he think Blake was referring to blackface?

He probably isn’t that ignorant or incompetent. But he’s playing to an audience that is.

An essay on British working class life wouldn’t get you into the New York Times or Arizona Republic op-ed sections, but discovering racism lurking in Mary Poppins or a restaurant photo will.

The chimney sweep and the coal miner were powerful symbols of the working class. But the transgressive images of Mary Poppins and middle class children smeared in coal dust or coal miners enjoying a pint in a pub before the big strike are no longer politically useful.

And what isn’t politically useful swiftly becomes reactionary. Every progressive will live long enough to become his own villain as yesterday’s revolutions of social progress become tomorrow’s hate crimes.

In what some are calling, “facecrime”, media essays read hateful volumes into the quirk of a teenage boy’s lips at a pro-life rally or the coal dust on men’s faces. These exercises in theoretical physiognomy don’t reveal new truths, they are just the Rorschach inkblots that justify the bigotry of the observers.

The new obsession with racism demands ignoring the terrible damage that the Democrats have done to African-American communities with their policies through an endless search for shiny new racisms. Reading racism into movies and photos does nothing to help African-Americans in the working class, but fuels a boom in the work of academics and essayists of all races whose work is geared to the upper class.

The coal miner photo and the dancing chimney sweeps date back to an era when the Left was interested in class. Now it’s refocused all its attention on race while leaving the working class behind in the coal dust. And to the Buddhist poets and Harvard academics, coal dust doesn’t represent class, but racism.

When you don’t work for a living, then the people who do, real or fictional, are incomprehensible. Like their upper class predecessors, the Left sees the working class as ‘other’ and their dirt as moral decay.

The cultural signifiers and attitudes haven’t changed. Only the exact definition of immorality has.

The upper class of a century past thought that dirty working people were crude, indolent and savage. Our leftist upper class thinks that they’re racist.

They could benefit from joining Bert in a trip up the chimney.

Green New Deal is a Tax and Spend Deal!