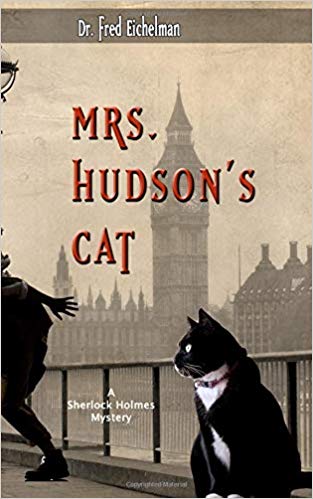 It’s the turn of the 20th century in England and evil lurks over the country. Europe is a decade away from The Great War. Plots and intrigues are already in motion. There are drugs being smuggled in. Plans to terrorize London in the works. And one man and his sidekick trying to solve the mysteries before destruction is executed – Sherlock Holmes and no, not Watson. A cat named Tuck.

That is the story behind the latest Sherlock Holmes adventure fans will enjoy, “Mrs. Hudson’s Cat” written by the biggest Holmes fan of them all, Dr. Fred Eichelman.

The story is a page turner that is hard to put down. It will have you on the edge of your seat as Holmes and Tuck work together with the help of some unlikely aids such as Holmes’ old beau and Mrs. Hudson herself. The story is superb and true to the Holmes genre. In addition, the embedded art work is excellent and is a great asset to the story as you follow along.

That the main character is a cat shouldn’t surprise us. Isn’t it just like the feline species to put themselves center stage in any situation? The book may be fiction but the actions of the cat are all too familiar to those of us who love them. Holmes learns not only to tolerate the cat but to realize this four legged furry creature is instrumental in solving the case! If only cats knocking over household objects every day would have as beneficial an effect.

A couple of spiritual themes run through the story.

First the struggle between good and evil. The setting may be 1900 but it could easily speak to our own world as well. Human nature hasn’t changed much over the centuries. And just as Holmes and Tuck (the good) are victorious, there will come a day when evil will be totally defeated by our the Savior Jesus Christ.

Second, we also see how God can often bring unexpected surprises into our lives (in this case the cat) that he uses to fulfill his purposes. While Holmes initially isn’t fond of the cat, he comes to realize its value and at the story’s climax he NEEDS the cat to solve the case. It’s a good reminder to be open to the myriad of ways God can work in our lives though people, situations – or cats!

So it is really elementary my dear reader. This is a delightful book that has found its place among the Sherlock Holmes genre.

You can order the book online from Amazon.

Dr. Eichelman will be having an autograph signing on Saturday February 16 from 10-4 at the Craft and Vendor Fair located at Andrew Lewis Middle School, 616 College Ave Salem, Va.

Daniel Greenfield: "Coalface" and the Left's Betrayal of the Working Class