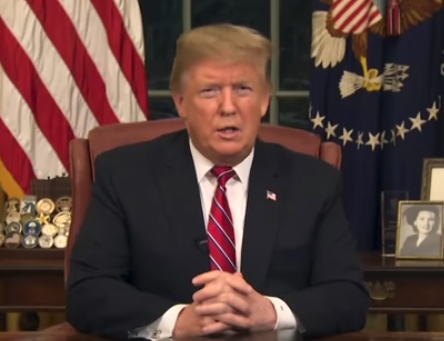 Recently President Trump spoke to the citizens of this great country on the ongoing issue of border security. It was a great speech and addressed several issues:

First he distinguished between illegal and legal immigration (something the media never does in accusing opponents as anti-immigration):

“America proudly welcomes millions of lawful immigrants who enrich our society and contribute to our nation. But all Americans are hurt by uncontrolled, illegal migration. It strains public resources and drives down jobs and wages. Among those hardest hit are African Americans and Hispanic Americans.”

“Our southern border is a pipeline for vast quantities of illegal drugs, including meth, heroin, cocaine, and fentanyl. Every week, 300 of our citizens are killed by heroin alone, 90 percent of which floods across from our southern border.”

The criminal element of illegal immigration:

“The last two years, ICE officers made 266,000 arrests of aliens with criminal records, including those charged or convicted of 100,000 assaults, 30,000 sex crimes, and 4,000 violent killings. Over the years, thousands of Americans have been brutally killed by those who illegally entered our country, and thousands more lives will be lost if we don’t act right now.”

Women and children are the victims:

“Last month, 20,000 migrant children were illegally brought into the United States — a dramatic increase. These children are used as human pawns by vicious coyotes and ruthless gangs. One in three women are sexually assaulted on the dangerous trek up through Mexico. Women and children are the biggest victims, by far, of our broken system.”

Trump then repeated his request for 5 billion for border security and went right after Pelosi, Schumer and the left:

“Chuck Schumer — who you will be hearing from later tonight — has repeatedly supported a physical barrier in the past, along with many other Democrats. They changed their mind only after I was elected President.

The federal government remains shut down for one reason and one reason only: because Democrats will not fund border security.

The situation could be solved in a 45-minute meeting. I have invited Congressional leadership to the White House tomorrow to get this done. Hopefully, we can rise above partisan politics in order to support national security. (Note: after asking Trump to re-open the government and that they would then negotiate funding for the wall, Pelosi stated emphatically at the meeting that she would not provide ANY funding on the wall).”

The best moment of the speech came when Trump eviscerated Pelosi’s comment about the wall being immoral:

“Some have suggested a barrier is immoral. Then why do wealthy politicians build walls, fences, and gates around their homes? They don’t build walls because they hate the people on the outside, but because they love the people on the inside. The only thing that is immoral is the politicians to do nothing and continue to allow more innocent people to be so horribly victimized.”

Trump ended by equating this issue as a moral one:

“I’ve held the hands of the weeping mothers and embraced the grief-stricken fathers. I will never forget the pain in their eyes, the tremble in their voices, or the sadness gripping their souls.”

How much more American blood must we shed before Congress does its job?

This is a choice between right and wrong, justice and injustice. This is about whether we fulfill our sacred duty to the American citizens we serve.”

There is something Trump didn’t do in his speech: He did not declare a national state of emergency in order to build the wall using the military. Instead at this point he is willing to use the legislative process. So much for Trump being a Hitler like dictator.

After Trump finished the Democrats spoke, having demanded equal time. They can’t tolerate him talking unfiltered without them telling us what to think. So who did the party that claims to represent all the disenfranchised groups choose to speak? Why, the old white people who run things for the Democrats in Washington. Sounds like they need some diversity training! 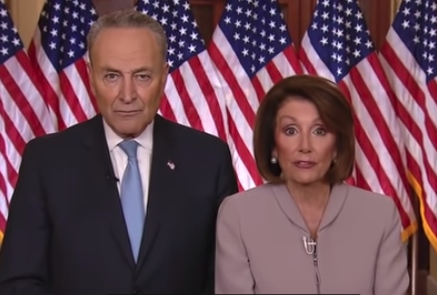 The speech was a disaster. I mean, would you be inspired by people who presented this demeanor? When it was mercifully over Trump looked like the adult in the room (and rather young!). Schumer and Pelosi looked like robotic morticians. I thought for a moment I was watching some horror movie spoof. The most incredible thing was Schumer letting Pelosi speak. Normally you don’t want to be between him and a microphone.

Basically the speech addressed NONE of the topics Trump addressed. It was the normal “he plays on our fear rhetoric” from their old and boring playbook. Halfway through it I found myself thinking about the Star Trek episode “Miri” where Kirk had to try and convince children they were dying of a horrible disease. But all they would say was “blah blah blah” and “Bonk Bonk on the head”. That’s what the Democrat response reminded me of. If you have 10 minutes to waste you can watch it here.

The media reaction was mixed. The Washington Post felt Pelosi and Schumer blew it:

Democrats insisted on equal time, which is highly unusual for presidential addresses other than the State of the Union. It was a mistake. In contrast to Trump, Pelosi and Senate Minority Leader Charles E. Schumer (N.Y.) came across as small and intransigent.

While Trump spoke calmly and rationally from behind the Resolute Desk, the Democratic leaders accused him of “pounding the table” and having a “temper tantrum.” While Trump told human stories, they complained about process. They accused him of arguing that the women and children at the border were “a security threat” when he had just explained to the American people that they were victims, too. They charged him with using the “backdrop of the Oval Office to manufacture a crisis, stoke fear and divert attention from the turmoil in his administration.” They were partisan and petty, while Trump came across as reasonable and even compassionate.

“After all the buildup, Donald Trump’s televised address from the Oval Office on Tuesday night, the first of his Administration, was a dud. He didn’t unveil any new proposals to end the government shutdown. He didn’t offer up any meaningful new arguments for his border wall. And he didn’t declare a national emergency in an effort to circumvent opposition from congressional Democrats, which he’d been openly talking about in the previous few days.”

I have no idea what speech he was watching.

“Instead, he read a highly misleading ten-minute stump speech in which he sought to portray the wall, or a steel barrier, as a solution to a humanitarian crisis on the border, rather than what it is and has been all along: the holy grail of a nativist political movement that he has nurtured and cultivated ever since he came down the escalator in Trump Tower.”

There it is! I was wondering when the racism charge would surface. Klein continued to say, “For instance, he could have resurrected the idea of linking border-wall funding to providing a pathway to citizenship for the Dreamers; that would have given the Democrats something to consider, anyway.”

Except he did that last January and the Democrats rejected it. Of course Klein’s readers are low information voters so they’ll eat that up.

“What nervous congressional Republicans needed to see from Trump tonight was that he had either an argument that could turn public opinion or an endgame to break the shutdown stalemate. But all he had, all he’s ever had, is the same old talking points.”

Talking points? Are you kidding me? Mr. Klein obviously is trying to be clever but failing. It is the Democrats who are using the “same old talking points” of racism and fear against Trump. This is what they always do because they are unable to debate issues on their merit.

If there’s anyone who knows about ineptness it would be Scarborough. Irrelevancy, too.

Reminder: No one is illegal on stolen land #TrumpAddress

Gee, I thought Hogg was just an expert on gun control. Who knew he was also proficient on immigration? By the way, Hogg is still living in the United States, i.e. “stolen land”. Add hypocrite to his accolades. I loved this response to Hogg’s comments:

Native Americans had an open door policy on immigration and welcomed all who came onshore. Howd that work out for their country?

And finally, Ace of Spaces had this to say:

“He once again slammed the Democrats into the ground in front of the entire nation and blamed this entire mess on their intransigence. They are also tarred with the same brush as fundamentally unserious and dangerous about protecting our citizenry and national sovereignty. Standing in sharp contrast to the President was the shockingly wooden, shrill and tone-deaf response from Chuck Schemer and Nancy Pelosi that even their allies (and to some their puppet masters) in the Media could neither hide nor spin. From every leftist quarter came some of the most unhinged responses – many even before the President actually spoke, preemptively declaring him a liar. A few wanted him to be prevented from speaking entirely, which I guess both indicates that they justifiably feared his connecting with the majority of the American people and not just the base, and their totalitarian mindset.”

I believe President Trump hit a home run. He addressed all the major points of the debate in a calm, deliberate manner. The Democrats looked ridiculous, petty and out of touch with reality in their response.

What are your thoughts on this debate?

The Tea Party 10 Years Later: Could It Happen Again?