Well, the recent mid-term results have certainly made it a great deal harder to take the necessary steps to secure our borders, and to guarantee the safety of the American people. The Democrats simply refuse to budge, even in the face of a huge government shutdown. Despite President Trump’s excellent work on the problem of illegal immigration, the border is still not watertight, rather porous; and there is a lack of proper across-the-board legislation on voting procedures, to eliminate the weaponization of illegal immigration as a means of gaining illegal votes for our pay for play politicians and their corporate partners

That is about as far away from ‘democratic’ (small d!) as you can possibly imagine.

Nevertheless, the Democrats are hellbent on ensuring Trump loses at every corner. Sanctuary cities are releasing illegal aliens without informing ICE. This is a serious public safety risk: we all know that a substantial number of illegal immigrants have been involved with criminality and even the unspeakable brutality of MS-13, whose has a past of hideous cruelty, it is reminiscent of none less than the Islamic State themselves!

“Welcome to America. Now turn around and head back the way you came.” 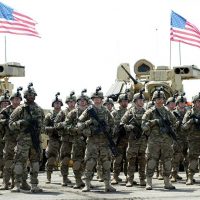 Top Democratic leaders; have vowed to abolish the Immigration and Customs Enforcement agency, ICE. It is now perfectly clear, that Democrats — plainly, they want open borders enforced for their 2020 election bids. They do not want a wall, law enforcement and they do not want an enforcement of our laws and open literally a free pass in terms of our border. In addition, they support sanctuary cities, sanctuary states, and free everything for all, like here in California, where our homeless is at its highest in the country and migrants have it all.

Moreover, is it true that Blue Lives Matter? Not to the Democrats, it seems. Recently, an illegal alien who has previously been released twice has killed a police officer. This is not new it’s been going on for some time now, let’s see about two tears. The Democrats seem to have no qualms about willfully endangering the police, who already have a very challenging and indeed outright perilous job, not to mention the average citizen! It seems that our law enforcement is at the mercy of corrupt politicians, rather than the police and the military themselves. Short-term politicians are able to use false notions of compassion really represent nothing more than a sentimental refusal to embrace moral discernment over shallow, opportunistic talking points.

I am certain the answer and the best thing we could do for Mexico, Central America and our protection is not give these countries the kind of aid or money that will ultimately end up in the hands of the drug cartels. Why, they have bitten the hands that feed them. It is imperative that we secure the border, so drugs and its trafficking in people that makes up a good portion of their income supply stops, at least across the southwest border. Contrary to the howls from the liberals of ‘racism’ and ‘xenophobia,’ it would greatly benefit the Mexican people if Mexico can finally become one of the top 10 economies.

We do not need to look very far, just across the pond at what open borders will result in, mass trafficking (sex and drugs), vandalism, destruction of property, devaluation of property, gang violence, and general chaos and violence on a regular basis. Similar things will happen to us if we allow such actions to become a common occurrence. America needs to be THE country with the fortitude and courage to take a stand and say “NO.”

President Trump should shut down the ENTIRE BORDER! Our military is on hand to do just that protect our country, y any means necessary.

It really is as simple as that!

Surely, America can do better.

Pat Boone Talks About the Greatest Influences in His Life: Second Only to God, His Wife, Shirley